Compare the dystopian societies, and the methods used to create them, in ‘The Handmaids Tale’ by Margaret Atwood, and ‘1984’ by George Orwell (paying particular attention to the representation of gender).

The futuristic and oppressive themes that define a dystopian society are in ‘1984’ by George Orwell and ‘The Handmaids Tale’ (THT) by Margaret Atwood. These forms of society feature contrasting types of repressive social control and these stories often explore the concept of humans abusing technology or the rights of people. Dystopian societies are often imagined as police states, with unlimited power over the citizens.

Don't use plagiarized sources. Get your custom essay on
“ Dystopian Society ”
Get custom paper
NEW! smart matching with writer

Through the choice of the narrator’s gender, the authors explore issues of this, which can be seen as a clear feature that emphasises the amount of oppression that both protagonists may experience; even though there is more prominence given to a woman facing male domination.

Evidence from the1960’s shows that there was controversy to whether women are equal to men in terms of jobs, the vote, education and their position within the family. In modern society women are more equal to men; however, during the period that Atwood wrote ‘THT’, the Woman’s Liberation Movement was occurring which was a political movement born in the 1960’s from the second-feminism wave. All pride and dignity is taken from the women in Gilead, which is a clear form of oppression towards women.

One example would include the isolation from their families and they are used as ‘wombs’ that have no other use. Not only is she tortured by the thoughts of what could have happened to her child and husband but in her new role, she is raped repeatedly by the Commander which proves that the female gender is less dominant compared to the men. Contrastingly, within ‘1984’ Winston has a negative attitude towards the dictatorship of Big Brother which suggests that men are more likely to rebel than women. Therefore, your gender may affect the amount of anger you have towards a person/society. Winston and Julia; lovers and rebels, are trying to become members of anti-Party Brotherhood. Therefore, the fact that Winston and Offred are of contrasting genders, emphasizes the amount of rebellion that they feel towards their dictatorships.

Orwell’s narrator, Winston, narrates in third person whereas, Atwood’s narrator, Offred, narrates in first person. ‘1984’ is clearly a novel warning people that politics could eventually control everything the people do. ‘THT’ is clearly a personal warning proposed by Atwood, as the authorities do not control everyone and what they believe in; they only need the ‘womb’ of the women which is the useful part of a women – illustrating the view that the ‘political’ cannot be separated from the ‘personal’.

Winston is giving the reader a more unbiased view because he is not as involved within the events as the reader may think. Winston comments on events that he is not involved in which gives the reader the view that Winston is an unbiased narrator. Contrastingly, Atwood clearly allowed Offred to become a first person narrator so that Atwood could become more involved in the events that happen in Gilead and to have a more intimate relationship with the reader as she can voice her own opinion which questions her reliability as a narrator. Within the first chapter, Offred clearly uses the word “we”, which shows the reader that she, is restricted within the Red Centre and lacks identity.

The structures of both novels reflect a dystopian society in terms of the hierarchy of the places. Perhaps both authors have a different opinion of how societies will be structured in the future. Evidence for this is that ‘THT’ is split into fifteen parts; nearly all of them are named ‘night’. Contrastingly, in ‘1984’ the chapters are represented as numbers and not as names which could portray Orwell’s vision of life within Oceania. It can be argued that Winston is not living his own life as men do in the 21st century this is because he is under Big Brother rule and will not be able to escape as Big Brother controls everything he is thinking and doing, even though the reader gets an idea that Winston doesn’t agree with this. The lack of detail and minimal description from Winston about the society could suggest that there is no significance in life and Winston has no importance within Oceania, which is explained through the structure of the society.

However, the fact that in ‘THT’ the majority of the chapters are named ‘night’ could give the reader an insight to how restricted women are in this society. The fact that night can generate fear to some people really shows that women were fearful of their future and they obviously do not only want to be seen as a ‘womb’ to continue the next generation. On the other hand, it can be seen that Offred is more comfortable during the night as she has a sense of freedom as she can think and imagine in her head. An example would include when Offred goes to see Nick, they speak awkwardly at first, but gradually become more comfortable with one another. Therefore, the structures of both novels that both authors have clearly thought about represent the hierarchy of the societies.

‘THT’ uses hierarchy of oppression such as the Guardians, and Aunts to maintain social control. The role of the aunt is to essentially ‘police’ the Handmaids so that they will become adapted to their new society, and the blame of many incidents is purely put on women. For example, “The spectacles women used to make of themselves… bare backs and shoulders in public… no wonder those things used to happen.” This suggests that Aunt Lydia believes that whatever it was that women suffered in the former society, it due to their own behaviour. This way of controlling minds in ‘THT’ is a more understated way compared to the means the Party uses in ‘1984’, in which the surveillance and control is displayed more apparent. Wilson is obviously aware of the government surveillance that he is exposed to; the Telescreens are noticeable and their purposes are evident.

This guarantees that people will abide by the governments’ rules, being aware that there will be a consequence if they don’t obey; they fear the potential punishment which scares them into submission. Therefore, the methods of control that Atwood uses are perhaps more subtle; contrastingly the surveillance is more obvious within ‘1984.’ The ‘Aunts’ arguably are a more subconscious method of maintaining power. By limiting the essentials to the women in the Gilead society, women of the future are warned of the oppression they may face and ultimately need to avoid.

A completely differing method used by the totalitarian government in ‘1984’ is surveillance used by the party maintaining the oppression over Oceania by using Telescreens. The party use this constant surveillance to maintain social control and ensure that the party can control and eliminate any form of uprising. “BIG BROTHER IS WATCHING YOU” is a constant reminder to the society that every action taken is watched and that Oceania has no form of discretion. As a result, the lack of privacy in ‘1984’ allows the party to maintain control over the people’s actions and thoughts which increases the extent of power.

The dictatorships in both ‘THT’ and ‘1984’ restrict the protagonist’s memory so that what they learn whilst being overpowered is what they believe to be right. Winston’s memories are less frequent compared to Offred’s, and they are also more direct. Offred’s memories of the past are staggered but she has irregular flash backs of her daughter and her former partner, Luke. She has flash backs of fleeing across the border into Canada, but they were caught and separated from one another, and Offred has seen neither her husband nor her daughter since.

However, Winston’s memories are unclear as they were destroyed due to the revolution. The dystopian government and oppressive society created a void in his mind. Perhaps the authors put the impact of the memories into the novels so that the reader gets an impression that memory in a dystopian society reflects freedom. The more Offred and Winston imagine their past, the more they are able to think about the previous amount of freedom which would lead them to rebel.

Both societies restrict individuality which leads to both protagonists rebelling; this is because of the impact of being under oppression. In ‘THT’ the totalitarian state is portrayed as negative by the reader because Offred is isolated from society and left powerless. This leads to Offred having rebellious outbursts even though she is denied freedom of speech. During testifying all of the Handmaid’s shout at Janine “her fault, her fault, her fault” and “she did, she did, she did”. The importance of all of the Handmaids shouting in monotonous tone represents the lack of individuality.

Furthermore, the repetition represents the whining auto-response expected by the women in the Gilead society. Contrastingly, Winston shows aggressive hatred towards Goldstein and everyone present in the room. He and other people have “a hideous ecstasy of fear and vindictiveness and a desire to kill”. This expresses the importance of Big Brother and shows how he has turned all of the characters into inhumane people. The language that Orwell uses is vicious but creates an animal-like view of Winston which tells the reader that he will always be under Big Brother control, expressing a warning of the future. Unlike remorse felt by Offred, Winston feeds off hatred which distinguishes the two protagonists and the severity of the state control in both novels.

The exploitation of language and use of propaganda features prominently in both novels. The establishments use language to endure control over the inhabitants to change people’s thought process. Within ‘THT’, the authorities use one-sided Bible quote to condition the handmaids to conforming and to ensure there is no form of rebellion. Offreds analytical nature is represented as she knows that these Bible quotes are distorted. “It’s from the Bible, or so they said”. Offred also acknowledges these are forms of propaganda to ensure that the dystopian society is fully in play. The use of propaganda in Nazi Germany (1933-45) had a dramatic affect in changing the public’s opinion in favour of Nazi policies, including ‘total war’.

This is similar to Offred as she knows that the Bible quotes are publicized to ensure the women understand their only purpose, to reproduce, however, she still prays even though she doesn’t agree with it. However, in ‘1984’ the system of ‘Newspeak’ is used to shorten the way of speech and it is the specific language used in their newspapers. This suited the totalitarian regime of the Party, whose aim was to make subversive “thought crime” and speech impossible. Thus Newspeak is possibly an attempt by Orwell to describe a deliberate intent to exploit this decadence with the aim of oppressing its speakers. 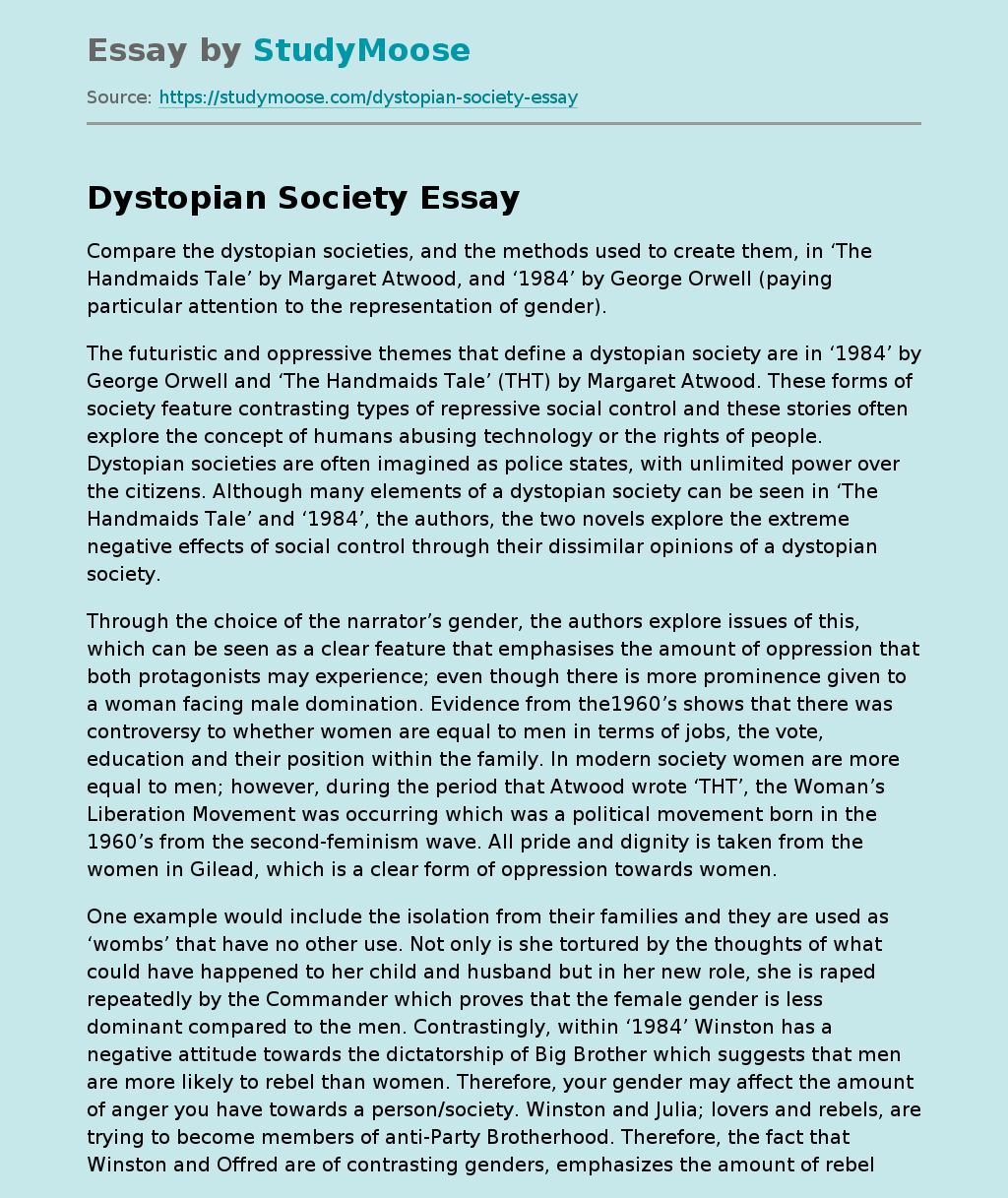