The Handmaid's Tale: Role of Handmaids

“Something could be exchanged… we still had our bodies. ” (Chapter 1) How are the women in The Handmaid’s Tale both oppressed and the oppressors? Atwood’s novel portrays strong feminist ideas throughout the tale, suggesting how women could become oppressed in the future. The Giledean state runs its laws and regulations based on extreme biblical views. In the bible Rachel couldn’t bare Jacob children, so she made her maid conceive children with Jacob this concept of the bible is portrayed in this novel by Atwood using the Handmaids as instruments of reproduction.

Don't use plagiarized sources. Get your custom essay on
“ The Handmaid’s Tale: Role of Handmaids ”
Get custom paper
NEW! smart matching with writer

These sexual acts are called ‘The Ceremony’, and this is when the Handmaids and their Commander attempt to conceive a child. Although it is clear that females are oppressed in Gilead, it could be argued that they hold an advantage and may even be oppressors themselves. The title reveals that the reader will learn of a ‘tale’, and this advocates that this piece of writing will be unreliable.

Atwood could have used the title of the novel to foreshadow the chaotic and almost random narrative to come. The Handmaid’s Tale title suggests oppression and possession of women through the apostrophe.

Moreover, Atwood expresses deprivation of personal possessions through Offred in Chapter 1. ‘We still had our bodies’; Atwood has stressed upon the fact that the Handmaids still had their bodies despite their deficiency of other belongings. However, she then contradicts this idea with the apostrophe in the title, suggesting that her character, Offred, has a tale of her own to tell which is according to her own free will.

At the end of chapter one Atwood presents us with the Handmaids names; ‘Alma. Janine. Dolores. Moira. June. ’

Failing to reveal the identity of Offred immediately engages the reader of any era as any human being fears or despises the thought of the unknown. Their names set side by side but separated by full stops could be Atwood trying to declare that women are individuals, yet the list-like sound of these one word sentences indicate the notion of group identification. Assembling the women’s names together creates a false hope that these females will have each other to rely on and lean on throughout the novel.

It is striking and ironic that Atwood chose to place the names of the women at the end of chapter 1 as it could signify the low status of these women in the Giledean Republic and their place –at the bottom- of the social hierarchy. This also creates an end of the line effect; death to the women’s identities, the last time they utter their own names, the end of them as free women, the introduction of their positions as anonymous possessions. This quotation suggests oppression and robbed expression for the women in tomorrow’s society.

Dystopian novels are supposed to create an unpleasant future and in The Handmaid’s Tale Atwood creates a realistic warning to the people of her time on the consequences of global conservatism, however this a possible extreme interpretation. The name Offred could be cunningly rearranged to form reasons for the Handmaid’s oppression. Atwood used a simple but powerful approach when designing the character’s name as it sets the readers mind free to interpret what her new label Offred means. An obvious analysis of Offred proclaims that she is owned, she is a possession of Fred –her Commander- whom she must bear children for. Her name is Ofglen, and that is about all I know about her. ’(chap4, pg29) All the Handmaids are named after their Commanders. The repetition of ‘about’ implies she knows nothing about this woman; it clarifies that her identity has been completely eliminated, making sure the reception is clear that this woman is unknown to the narrator. The fact that even Offred does not know about her shopping partner suggests that even the Handmaids themselves believe in Gilead’s system and their places in society.

They have been oppressed to the point where they have adapted to their ‘assigned’ roles. A contemporary reader would perceive the roles of the Handmaids to be an exaggerated view on the norm; this novel would be mildly offensive as nuclear families and the gender roles were more common as it was the zeitgeist of the 1980s. A modern reader would have a more critical reception of the oppression Atwood expresses through Offred as society is ever changing and the structure of families is too complex and diverse to only have nuclear families and gender role commitments.

The name Offred could also be rearranged to say ‘off red’; the red could be insinuated to suggest the womb which is a significant instrument in reproduction that she has no control of in her current status. Fortunately Offred’s womb is full of life, as she is fertile. The sexual act to conceive the children is called ‘The Ceremony’. The word ceremony makes the practise seem important, sacred, and religious, also in some senses special. In the present day sex is exploited through the media by objectifying women.

Atwood forms her own concept of this as the Handmaids are not exploited through the media but by their state. The modern reader will take ‘The Ceremony’ more harmlessly than the contemporary as there is a commercial trend of sexual novels, nevertheless the ‘The Ceremony’ could still appear unsettling due to the fact that it is forced sex mainly for reproduction. The specify Atwood enables that the sexual act is purely based upon making babies is slightly alien to the modern reader.

Sex is often seen as a pleasurable act more than a method of conceiving in this era, with varieties of contraception and freedom to express sexuality it is hard for a modern reader to relate to the oppressed sex life Atwood presents through the Handmaids. In contrast the contemporary reader could understand that Atwood is trying to express the extremes of women not being in control of their own birth control with Reagan changing the laws of abortion babies were being made that were not necessarily wanted ‘what I must present is a made thing, not something born’.

Atwood shows through Offred how having an unwanted baby creates no compassion towards it. ‘I wait. I compose myself. My self is a thing I must now compose, as one composes a speech’ the first two sentences being short with sudden full stops create an effective mental pause for the reader. This could be Atwood trying to tell the contemporary reader to stop and think about the goings on in society for the modern reader the messages could be outdated. Splitting ‘myself’ into ‘my self’ shows a divide between the oppressed roles Offred is playing for her society and who she truly is.

It also shows that she sees herself as an afterthought as she felt the need to repeat ‘myself’ differently. In another sense the Gileadean Republic could be comprehended as a functionalistic utopia, in which the women have complete ultimate power. The society depends solely on women to reproduce; they are heroines and saviours. Without Handmaids there would be no reproduction resulting in a non-existent future wherein there would be a complete crash in society’s institutions. This puts women at the top of the hierarchy. Something could be exchanged… we still had our bodies’ in Gilead the woman may be at the bottom of the social hierarchy but they are the richest value. Their bodies are the most valuable and treasured item in the state. This could be a way of representing the recession of Atwood’s time; mistreating money could lead to an undesirable world much like if you mistreated women. The Moral Majority generated a fear within the feminist world with the up rise of their religious rights.

This struck a risk of everything women had made for themselves in the past decades being undone. Atwood creates a fear of her own for the contemporary reader expressing an extreme on the undoing of gender equality. This can be Atwood saying despite the world being patriarchal; women are valuable creatures which should be respected as their bodies are needed to create the tediously overrated man. Crafting this hostile but conceivable dystopia Atwood scares the contemporary reader into heeding her views on the corruption of global conservatism.

The Handmaid's Tale: Role of Handmaids. (2016, Oct 29). Retrieved from http://studymoose.com/the-handmaids-tale-role-of-handmaids-essay 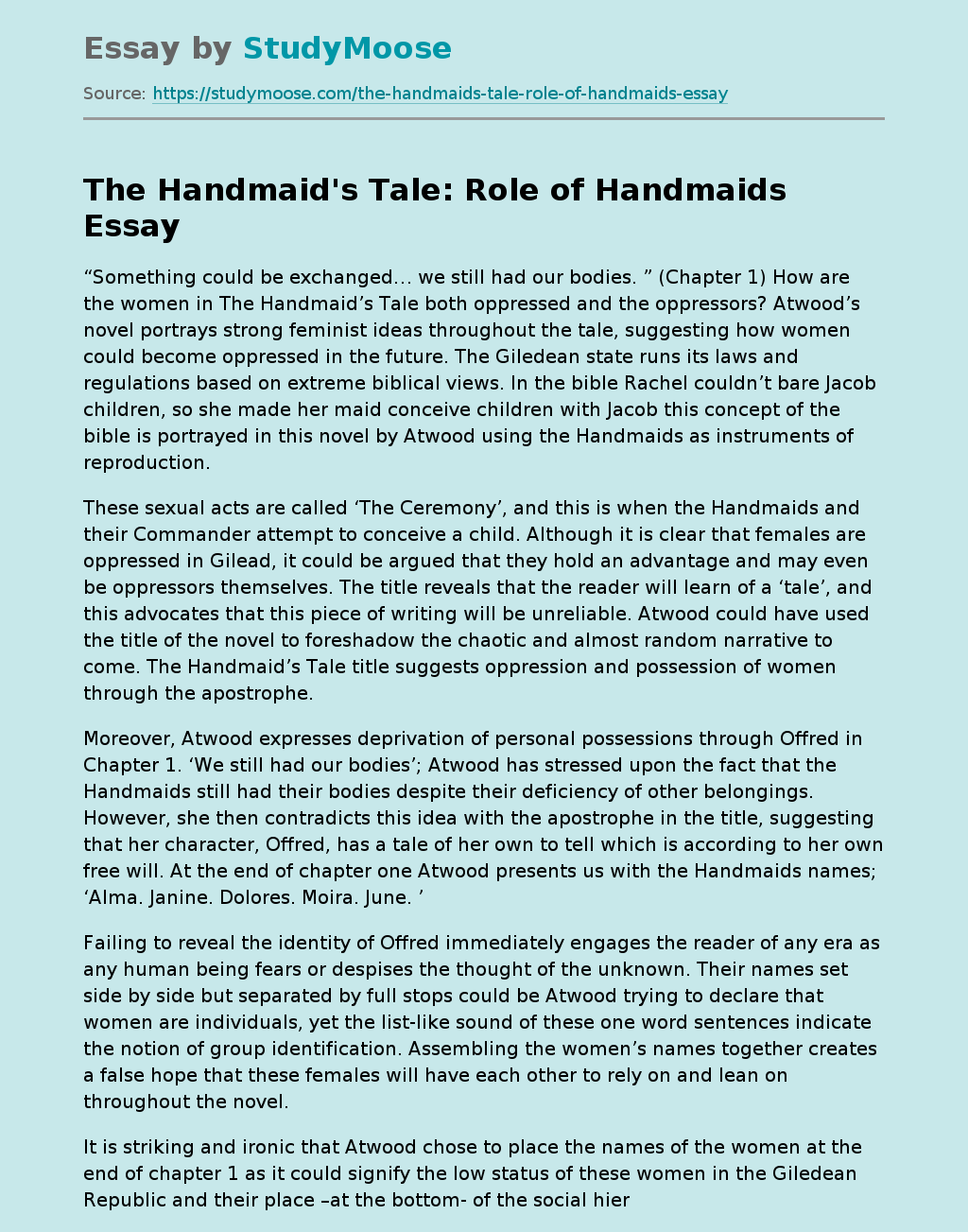