Dual and Cooperative Federalism in America

The United States is a perfect example of a country that has adopted federalism due to its divided power between the national government and the state government. Federalism is described in two ordinary models, dual and cooperative federalism. These views are different because even though they both include powers and tasks of the government, they are assembled differently. For example, in dual federalism, it is described as “layer cake federalism” because the layers of government are distinguishable and they separate the state from the national level.

Don't use plagiarized sources. Get your custom essay on
“ Dual and Cooperative Federalism in America ”
Get custom paper
NEW! smart matching with writer

On the other hand, there is also cooperative federalism. Cooperative federalism blends the national and state government functions into the federal system. It is also commonly known as “marble cake federalism,” it allows a sharing of comprehension between people and groups. Each government handles its own powers, so one power of the federal government is to declare war whereas for the states they can create their own laws, and generally run their own schools. On the other hand, some powers are also shared, like for example both the federal and state government have the power to tax.

All in all, federalism plays a huge role in American society if it did not exist, there would be an unbalance towards the states and the country as a whole.

There are many opportunities when it comes to participating in something politically. Two major opportunities would be voting and campaign volunteering. Voting is the primary way for the common citizen to participate in government, it enables your right as a citizen to choose for whomever you feel is right and although it’s been said many times before, every vote surely does count and it’s important to have your opinion heard.

Volunteering in campaigns is an experience and it may even lead to a career in politics fighting for social and political change, it is also a way for an individual to directly help implement governmental change. The United States is nowhere near a perfect country, it has its flaws and its issues. Many challenges are brought up when federalism is implemented however, federalism provides citizens with many opportunities. The challenges should not be ignored because they play a huge role in American society. For example, states tend to compete with each other. The bigger states, like Texas, tend to dominate and they dominate politics in a way that politics tend to favor these states. The bigger states have a more dominant influence than smaller states do. The wealthier states are the states that are growing whereas the smaller states are shrinking. The federal system is a delicate balance of political balance between the regional and the national government, and sometimes that balance goes off balance and that can lead to an unhealthy competition between the states causing issues. Another challenge is which states get what and how they receive it. How are the resources shared and distributed and how is the power shared. This creates tension between the states and still to this day is a challenge.

Although the main goal for dual federalism is to protect and divide the powers between the national and state government, it is too direct and it can surely cause problems. On the other hand, cooperative federalism provides a sense of knowledge that every matter in the United States is different. Cooperative federalism strongly motivates petitioners to “try their luck at whichever level of government offers them the best chance of success, or simultaneously to mount diverse sets of strategies across levels of government.” (p.108) But if citizens don’t become involved in political process, then no change can be made. By voicing out their opinions and standing up for what they believe in, changes are more likely to be made.

America would surely improve in so many ways if citizens become knowledgeable about the importance of political participation. Our country is always in need of improvement, so if citizens had the opportunity to have their voices heard, then there would be a vast improvement in the quality of our lives. Joining political campaigns can help voices be heard and it also encourages the public to go out there and participate in politics. They inform citizens about specific situations happening in society and they suggest for them to take a stand on that issue in order to have a better understanding. Attending a rally, protesting, sending a letter to a representative are all ways in how citizens can participate in politics. In doing so, we benefit our country and citizens become motivated towards the interaction of political participation. Federalism has always been a part of the United States if we did not have divided power everyone would be in everyone’s personal property and it would simply cause chaos. Federalism also helps keep the government from getting too strong and dictating their state rules and preventing state representation of the people. In conclusion, federalism gives the chance for the local governments to show what they can do, they can become transparent to their people and become closer with their citizens and although the federal system is a complex system, there’s always opportunities for the citizens to improve their country.

Dual and Cooperative Federalism in America. (2021, Feb 26). Retrieved from https://studymoose.com/dual-and-cooperative-federalism-in-america-essay 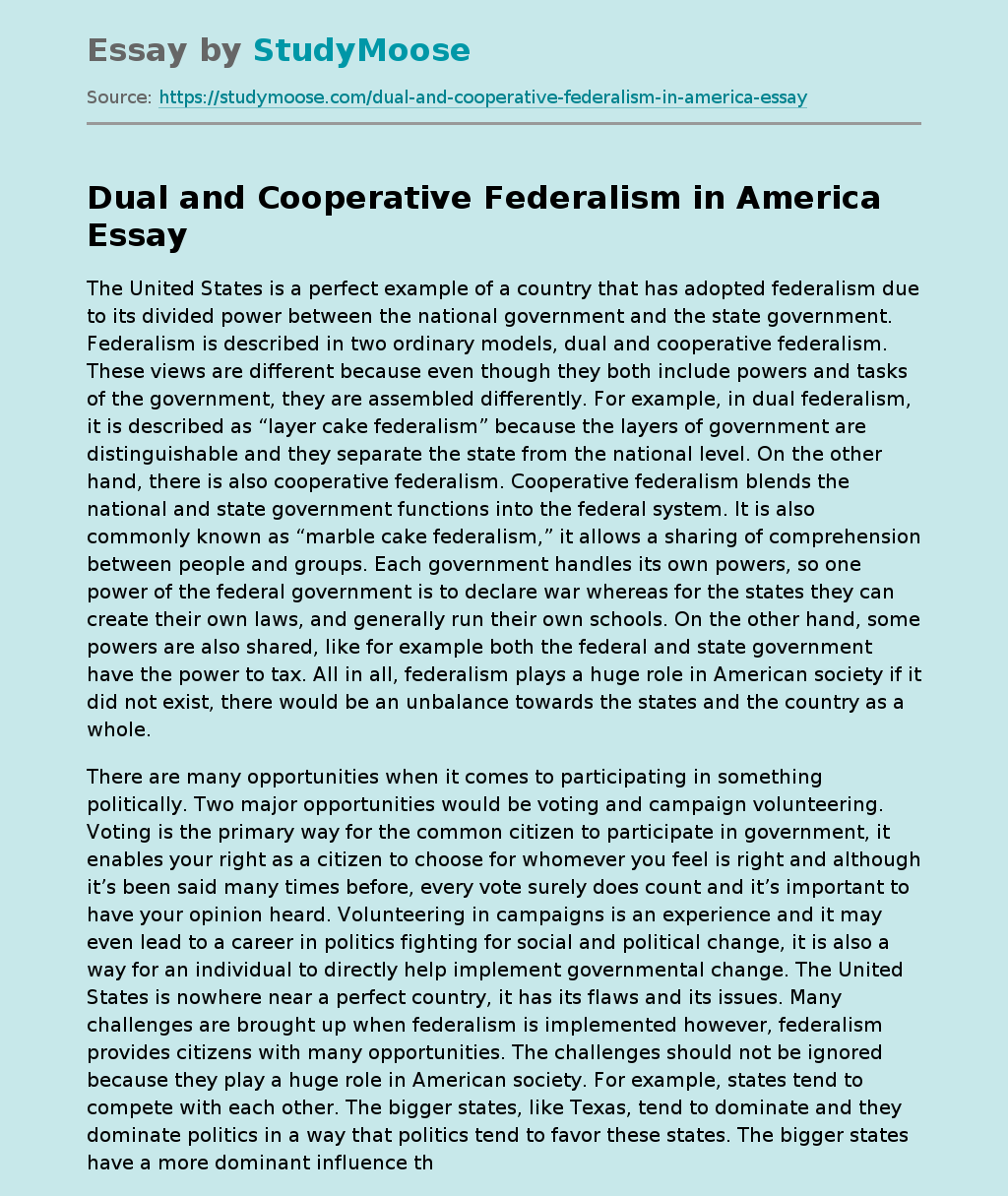