There is a problem because when a child is born he does not just jump out the womb or automatically knows how to read .

Don't use plagiarized sources. Get your custom essay on
“ Drinking Age ”
Get custom paper
NEW! smart matching with writer

“When adolescents are not taught to drink in moderation, they end up binge drinking when they do consume alcohol. It is better to teach youth to learn how to drink responsibly and hold them as accountable for their actions as we do with driving”. (David J. Hanson, “It’s Better to Teach Safe Use of Alcohol,”) Allowing them to start drinking at 18 will still leave some of them in the supervision of their parents and school so it would allow them to be taught better how to use it rather than starting and learning on their own .

Marshall 2 and even social drinking’s.”Lowering the drinking age will make alcohol less of a taboo, take away the thrill that many young people get from breaking the law, and make alcohol consumption a more normalized activity done in moderation”.

More than 10 million youths, have consumed alcohol in the past 30 days . The rate of current alcohol consumption increases with the increasing age according to the 2009 national survey on drugs uses . Deaths from 24% at age 12 to 22.4 at age 16 and 57.7 at age 20 so it will not change the affect because they will have access to alcohol consumption regardless whether we allow then or weather we continue to spend millions do wastefully trying to force them from drinking .

We are contributing to the hurt of teens by no letting the do something they should legally have the privilege of doing. “Prohibiting teens from drinking in bars, restaurants, and public locations has the effect of forcing them to drink in unsupervised places such as fraternity houses or house parties. When teens get hurt from alcohol-related injuries or accidents, they are sometimes afraid of seeking medical help for fear of legal consequences. Lowering the drinking age will allow teens to drink alcohol in regulated environments with supervision”. (Choose Responsibility, “FAQs,” ) we should allow them to drink among us once again so we can monitor and teach them how to do it responsibly ,

Reports in the 1970’s showing that teenage car accidents increased in states where the MLDA had been lowered from 21 prompted Congress to pass the National Minumum Drinking act .

Back to having the taboo of drinking that its not only because they want to do it , they do it . it is because of the restrictions and the way we go about enforcing it is why they do it .” Keeping the drinking age at 21 sends the wrong message that alcohol consumption represents maturity, which leads teens to want to consume alcohol to appear mature. Lowering the drinking age would help dispel this misconception .” (“Why do Teenagers Drink Alcohol?,”) We need to once again lower the age so the we won’t allow them to feel left out or like they are missing out on something .

Marshall 4 If we can keep constantly seeing that none of our laws or restictions are working then why continue it you do not feel that there is a need for change and maybe try something different . “ National alcohol prohibition from 1920 to 1933 failed, which shows that strict regulation of drinking is counterproductive, unenforceable, and can lead to an increase in illegal and underground activities” . (Digital History ,”Prohibition,”) the money we are using should be spent on other things like teaching them how to drink alcohol rather then arresting them and possibly ruining and harming or even ending some of these kids live’s.

“ Enforcing an MLDA of 21 is expensive and inefficient. Drinking is still a major problem among teens. It would be more effective to spend money on educating youth about alcohol than to spend it on enforcement of drinking laws for 18 to 20 year olds. “ (M. Wolfson, A. Wagenaar, and G. Hornseth, “Law Officers’ Views on Enforcement of the Minimum Drinking Age )

The state may not unfairly discriminat or indirectly against anyone on more grounds , including , race , gender , pregnancy , martial status , ethnic or social origin , coulor , sexual orientation , AGE , disability , religion , culture , language , and birth . ( Constitution ) Setting the MLDA at 21 is unconstitutional because it is discrimination against the particular age group of 18 to 20 year olds (Should Drinking Age Be 18?,” www.abcnews.com, )

Marshall 5 Turning 18 entails receiving the rights and responsibilities of adulthood to vote, serve on juries, get married, sign contracts, join the military–which includes taking on the responsibilities of life and death–and be prosecuted as adults. Adults from the age of 18 should therefore also be trusted to make decisions about alcohol consumption. (methyst Initiative, “Statement,” www.amethystinitiative.org, ) 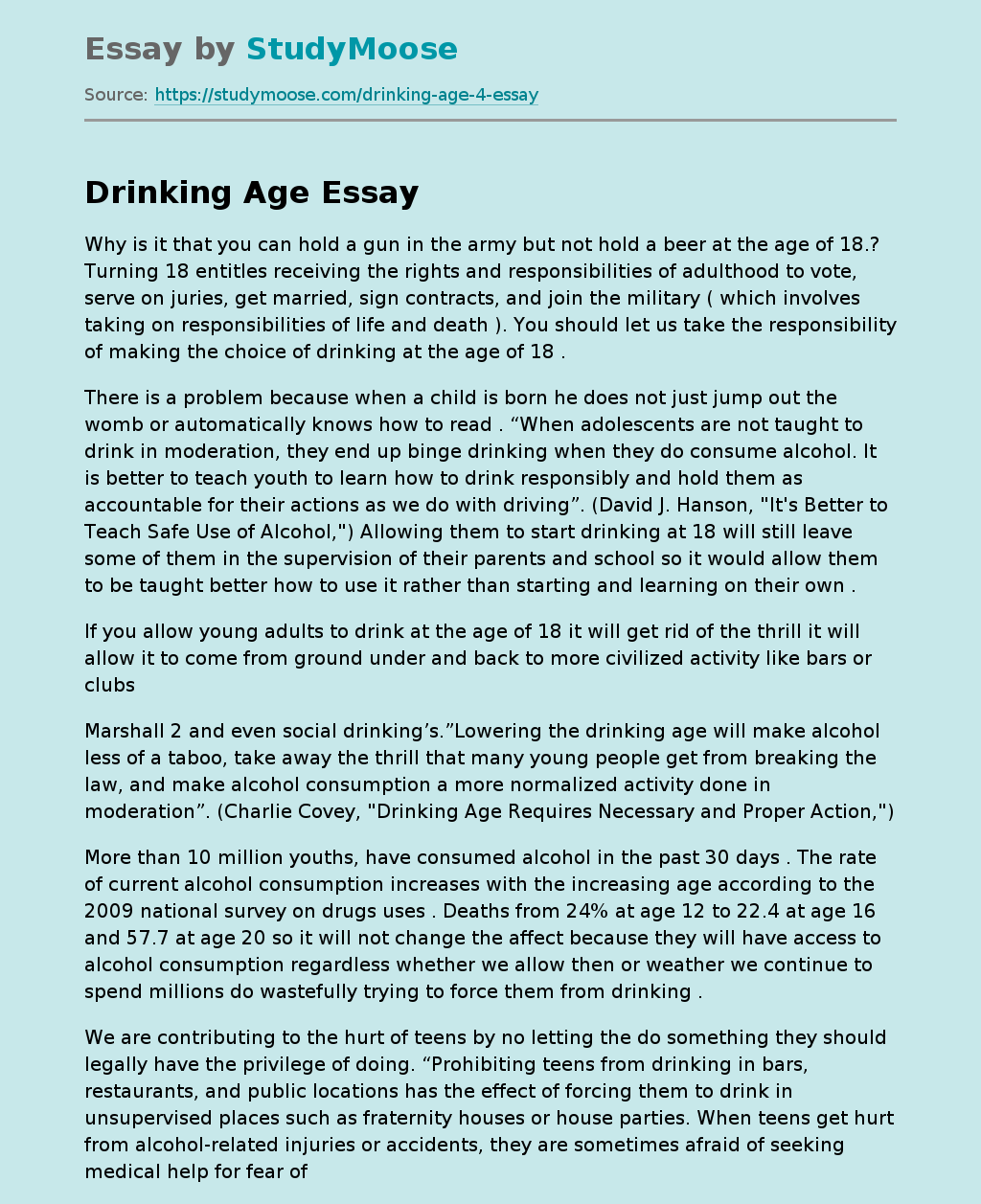