Often, writers in literature pilfer from the world of reality in their quest to present compelling characters and gripping plots. Nonetheless, others replicate the real world in an abstract sense to sensitize or communicate the malicious and malignant threats, epidemics and plagues prevalent in the world. Such episodes of these phenomena inflict mass threats and destructions, nefarious villains as well as innocent victims who apparel and enthrall novelists. In some instances, divine retribution follows the nefarious villains as well as grapples the ignorant innocent victims.

Don't use plagiarized sources. Get your custom essay on
“ Divine Power and Divine Retribution in Jose Saramago’s Blindness ”
Get custom paper
NEW! smart matching with writer

Indeed, the novel does not state explicitly that the onus of the swiftly hitting epidemic is resultant from the hands of a divine power such as God.

However, the author does not resist writing on a divine power, God. This is because Jose Saramago introduces and trails the action of the churches in supplementing the government’s effort to contain the situation. Moreover, there are multiple references to church leaders all observable in the novel. Besides, Jose Saramago’s presentation in the novel suggests that divine retribution followed a nefariously villainous person. He or she was inflicted or struck with blindness. Additionally, it is interesting to note that literal authors cannot write a masterful work in a spiritual, religious or cultural vacuum.

Deductively, it is evident that Saramago alludes to divine intervention and divine retribution.

Interestingly, the Blindness novel depicts a thrilling plot with an incessantly straying narrator from presentation of dialogues and facts to reflection on moral academic and ethical analysis at great lengths. Divine intervention and retribution features at the onset of the story in the first page. It is here that the author dexterously delineates in detail the expected features at an ordinary road intersection. These include flickering of lights and pedestrians crossing the road. Everything is a routine, and the events unfold as usual. However, a car at the intersection does not move or give way to the traffic behind, in spite of the flickering green light, creating an unusual situation.

The author is innate to this situation and goes on to consider rational motives behind the car’s stillness. He states, “there have to be some mechanical flaws, a loose accelerator, a stuck gear level, suspension problems” (1-2) and many other listings of things that could have gone wary. This situation does not go unnoticed because a bystander comes to the attention of the driver. He opens the door catching the attention of the driver as well as the reader. It then dawns to the reader that the driver was struck with blindness. This is rather bellowing and discomforting. It is not incidental that blindness just hit the driver cum blind. The cause of the blindness can only be explained in terms of divine retribution or intervention.

Saramago twists and turns the novel literally betwixt calamities. The “Good Samaritan” that came to the aid of the blind man later emerges that he is a thief. On driving the old man home, he steals his car. It is rather ironical that the good natured helper turns to be an immodest, insensitive and hands down thief. Indeed, it is immoral for an able person to take advantage of a handicapped person and exploit them taking advantage of their helplessness. The reader is appareled by the thief and only wishes for divine punishment. Therefore, the thief’s catching of blindness comes as a sigh of relief to the reader for what he or she considers as an immoral and ungracious act.

The scene of people being struck with blindness becomes an incessant phenomenon in the following pages. The narrator trails the lives of victims, and it emerges that they all had crossed paths one way or another. It is here that the narrator philosophizes divine retribution and intervention as calamity strikes the nation ravaging and resulting to outbursts among people with “I’m blind, I’m blind” uproars. In a series of skits between philosophical argument and conventional wisdom, the narrator presents a vivid account of the actions and motives of the escort and the car thief. Finally, blindness strikes these characters long before the narrator can conclude on the cause of the plague. Interestingly blindness strikes immediately without any bouts to announce its arrival. Divine retribution causes a fierily spread of the plague without a scientific explanation or physical symptoms. Blindness strikes swiftly, strangely and impartially. For instance, the doctor realizes that he too is blind while watching television. The plague replicates in nature and strangeness to ancient floods and plagues that were acts of divine retribution such as in the bible.

A clout to divine retribution is protracted from the doctor’s wife. She is the only victim of blindness who separates human flaws and godly affairs thereby attributing the epidemic to divinity. According to her, “this is unbearable filth of the soul of a human. Of the human body” (279). According to the narrator, “she said, as if to correct this metaphysical thought, then she added, it is all the same” (Saramago 279). The reader is left the quarry of the thoughts of divine power and retribution. Arguably though, why does divine power not punish the malicious and nefarious villains, as well? Thomas Talbott in his article, “Punishment, Forgiveness and Divine Judgment” argues that retributivist punishment theory. He justifids punishment by questioning if the punishment befits the error or crime committed. Therefore, punishment is not a rehabilitation or crime deterrence tool but a justice and equality feature (Talbott, 154).

Just like other narrations, the Blindness narrator is obsessed with the behavior of people when put under extreme conditions. It is interesting to see the huge and expansive wary and panic among people following the blindness plague. Indeed, such a mega scale panic and social disarray contends the prevalence of a divine power with much stronger abilities than man can think. Different institutions in the society fall and crumble thanks to the plague for fear of the plague. The military cannot contain the massively and swiftly spreading plague create a heat of battle and confusion amidst the crisis. The government is also initiated into the crisis. It imposes a quarantine effort to control the contagion unsuccessfully resulting to collapse of the media, military and businesses.

Divinity fabling is also evident in the identity of the characters in the novel. For instance, the author does not give them real names but rather opts to identify them in generic form. For instance, there is the blind man, the Good Samaritan cum the car thief, the doctor, the doctor’s wife among many others. The book begins with the first blind man trailing him as his eyesight elopes while at an intersection, in his car. The first blind man is rescued by the Good Samaritan who takes him home. Later on, the good Samaritan steals his car and eventually loses sight. Indeed, divine retribution strikes and the thief is blinded just like other noble souls. The level of blindness infliction is as a resultant of divinity. It trails people who have crossed paths. For instance, the doctor was struck with blindness. Interestingly, he had attempted to treat the first blind man. People who had sat at the waiting room also got struck with blindness.

Saramago presents the proclamations of the churches and the church leaders, as well. They preached the end times claiming that the world was coming to an end. The narrator states, “they were proclaiming the end of the world”. He adds that they preached, “redemption through the visions of the seventh days, through penitence, …the purity and sanctity of the lymph, the black cat’s blood, the sleep of the shadow, the logic of anthropophagy, the rising of sea, painless castration and mainly divine tattoos..” (Saramago, 298). This presents the existence of divine power that claimed the people. 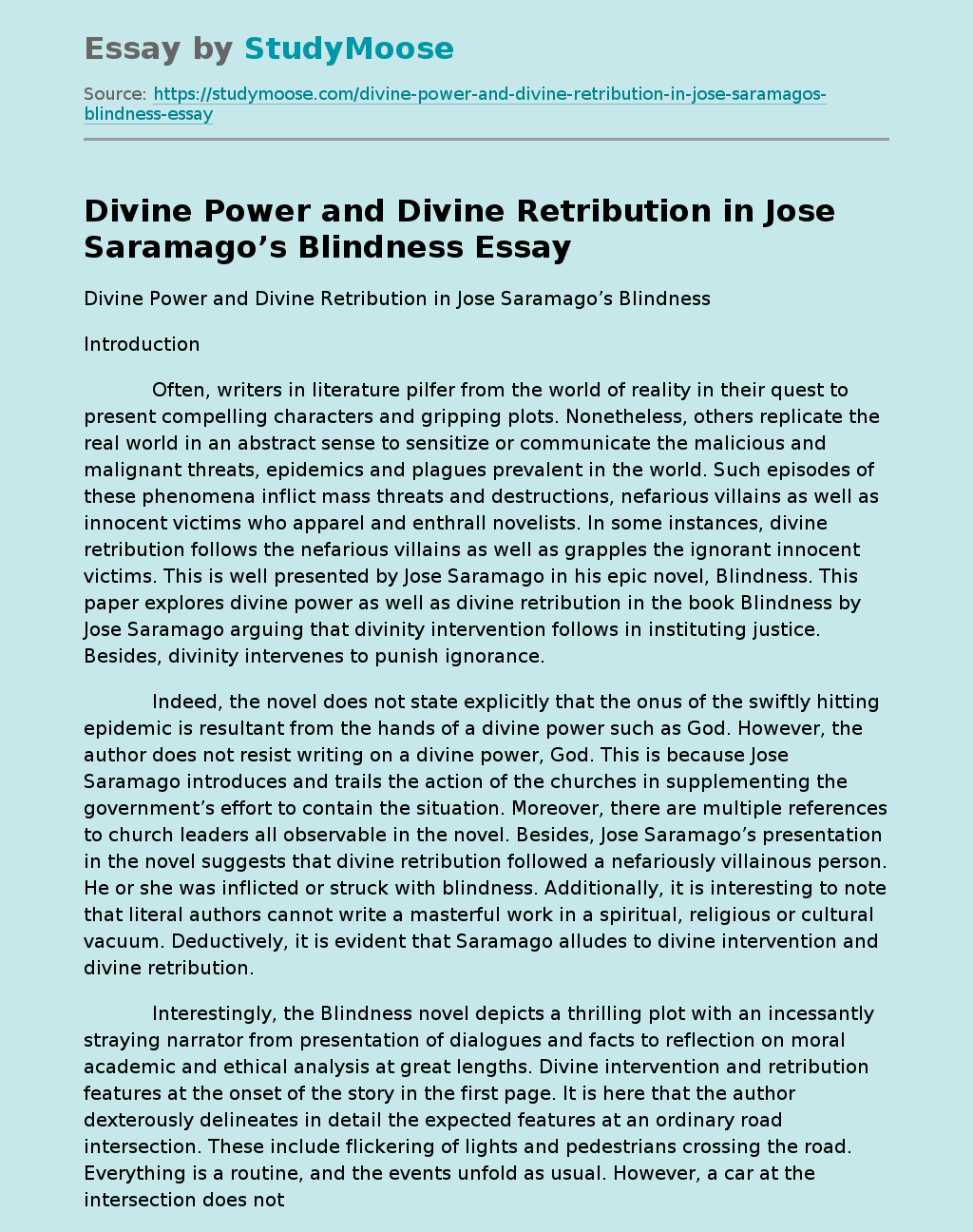