Act One Scene five is a very important because it is the scene where Romeo and Juliet meet and fall in love at first sight. Their love is contrasted with Tybalt’s anger and hatred, which leads to the tragic outcome occurring later in the play. We get to know more about the main characters and the theme of fate, set up in the prologue, is evident again here.

This scene begins with the serving men preparing for the Capulet ball.

Don't use plagiarized sources. Get your custom essay on
“ Discuss the importance of Act One Scene Five in Romeo and Juliet ”
Get custom paper
NEW! smart matching with writer

They are bustling about, joking and speaking informally. They say “Ay boy ready” and “You are looked for and called for, asked for and sought for, in the great chamber.” This scene contrasts with the previous scene where Romeo is miserable and moaning about not seeing his love Rosaline, this is because he has had a dream about something bad happening. He dreams that there are “Some consequences yet hanging in the stars” This last scene also contrasts with the next section where the audience would see the Capulet’s grand entrance, arriving on stage in fine clothes and speaking in blank verse.

Romeo first sees Juliet from a distance at the ball. He uses metaphors and similes to describe the affect she has on him. Romeo compared Juliet to “torches” that “burn bright”, he also said she is as stunning as a “rich jew in an Ethiop’s ear-“. He also says she looks like a “snowy dove trooping with crows”. This shows Romeo believes she is much prettier than all the other girls around him.

We know he is madly in love with her and it is love at first sight, his line “I ne’er saw true beauty, till this night” his use of rhyming couplets indicates true love.

Romeo and Juliet actually meet on stage and we know as the audience that this section is important and about love, because it is written in a form of a sonnet. The use of religious imagery clearly shows the audience that Shakespeare wants them to think that this is love of the highest quality. Words such as “pilgrim”, “holy shrine”, “sin”, “devotion”, “saints”, “palmers” and “prayer” compare Juliet to being God like. The sonnet form itself was popular and highly esteemed at Queen Elizabeth’s Court. While the sonnet is being spoken, the lines are split equally between Romeo and Juliet; this may be to show that they are two halves which make a whole. However this is a playful exchange between the two young people ending in a typical rhyming couplet, with Juliet agreeing to let Romeo kiss her.

The audience learns more about the other main characters as well, especially Lord Capulet and Tybalt. The audience is first introduced to Lord Capulet, when he enters on stage, as stated earlier welcoming his guests to the ball. He says “Welcome gentleman! Ladies that have their toes…” he welcomes his guests in a happy joking tone, and then starts the musicians. This makes the audience think of Lord Capulet as being in control, well spoken and friendly. We further see his power when Tybalt shows his anger at Romeo being at the party, first he says “Content thee gentle coz, let him alone…” When Tybalt refuses Capulet said “Go to, go to/ you saucy boy…” insulting Tybalt, and finally shouts saying “I’ll make you quiet…” Showing this extreme of character in this scene could for shadow his attitude towards his daughter, when he discovers she doesn’t intend to marry Paris.

Tybalt seems to be one of Shakespeare’s representational characters, epitomizing hate. When the audience first meet Tybalt in Act 1 Scene 1, he seems to be enjoying the “fray” and tells us he hates “peace hell and all Montague’s”. In this scene he threatens revenge on Romeo; he says “convert” his anger “to bitt’rest gall.” This leads to the tragedy and death of Romeo, Tybalt, Mercutio and Juliet.

Shakespeare effectively uses references to the theme of fate in order to keep the tension and anxiety built up in the audience. The belief that Fate determines our lives echoes throughout the play. We are first made aware of this theme in the Prologue when we hear the words “Star-crossed lovers”. We are also reminded of it before Act 1 Scene 5 when Romeo says “Some consequences yet hanging in the stars” and “Vile forfeit of untimely death”. Shakespeare then ends this scene with the chorus returning back on stage, talking in sonnet form, words such as “death-bed lie…” leaving the audience aware of their fate.

Act 1 Scene 5 is a very important scene with all of the events leading to the tragedy in Act 3 Scene 5, where both Mercutio and Tybalt die. The audience would experience a wide range of emotions throughout it. When Romeo and Juliet fall in love they would feel very happy and overjoyed. However this would also be accompanied by feeling nervous because of the premonitions.

Discuss the importance of Act One Scene Five in Romeo and Juliet. (2020, Jun 01). Retrieved from https://studymoose.com/discuss-importance-act-one-scene-five-romeo-juliet-new-essay 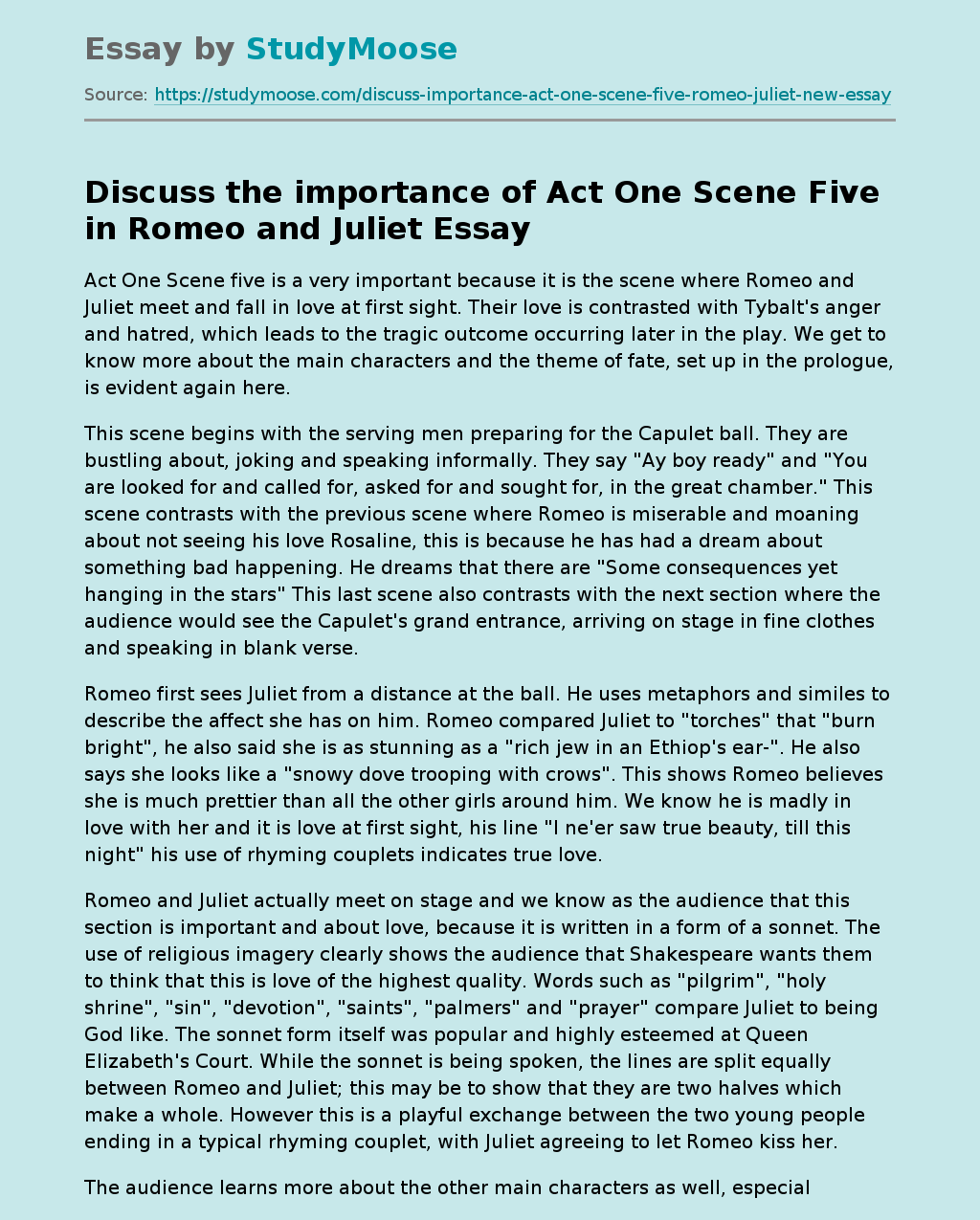