Discrimination Is Expensive, Inclusion Is Profit

Discrimination Is Expensive, Inclusion Is Profit

On April 20th, 2001, the U.S. Equal Employment Opportunity Commission (EEOC) settled a $2.44 million law suit against the University of Incarnate Word (UIW) due to the misuse of an English-Only rule. In Texas, the 18 Hispanic workers who were involved in the class action suit testified to being harassed and bullied over ten years. Their crime deserving of pervasive harassment was speaking Spanish on breaks and during lunch. The EEOC does what it can to limit the harm and misuse of the English-Only policies, but still to this day language discrimination cases are prevalent.

Don't use plagiarized sources. Get your custom essay on
“ Discrimination Is Expensive, Inclusion Is Profit ”
Get custom paper
NEW! smart matching with writer

The number of English-Only charges that were filed with the EEOC have increased by 500% since 1991(EEOC). Is the English-Only policy flawed, or are companies in America simply not paying enough attention to their employees? In order to reduce language discrimination, American companies need to understand the importance of their multilingual employees’ native language, and focus on the benefits that language diversity can provide.

In order to understand how and why companies can enforce English-Only laws, we must examine the regulations set by the Equal Employment Opportunity Commission (EEOC) regarding this law. First of all, can employers restrict their employees to speak English at a workplace or must they allow them to speak their native tongue? As with may other legal question this one does not have a simple answer. There are many factors that contribute to the creation of an English-Only rule at a workplace. As stated in the Code of Federal Regulations, Title 29, Section 1606.

7, English-Only rules cannot be applied in order to discriminate (EEOC). If there is an English-Only rule at a workplace it must apply to all employees and cannot directly target a minority group*. There are a few exceptions of when an English-Only rule can be justified; for communication with customers and superiors, in emergencies when a common language is needed, and for cooperative work assignments (Forbes). In essence the EEOC attempts to make it very difficult for companies to create such rules unless there is irrefutable evidence that such a rule is needed. Even with such restrictive regulations, why are there so many complaints filed with the EEOC that are caused directly or indirectly by English-Only rules? Despite the close monitoring of such rules, employees in companies with English-Only rules appear to be misusing them to discriminating minorities. Once such case of the rule being misused to discriminate a minority happened at Delano Regional Medical Center. “Supervisors, staff, and even volunteers were allegedly encouraged to act as vigilantes, constantly berating and reprimanding Filipino-American employees for nearly six years” (DRMC)***. The Filipino nurses were harassed even during breaks, told to speak English, even though the EEOC regulations clearly state that such actions are not allowed. Besides being verbally abused and threatened some were even physically assaulted. After the case was settled the medical center payed out $975,000. In a similar case the University of Incarnate Word (UIW) payed out a $2.44 million settlement for targeting and discriminating their Hispanic staff (UIW)***. Such cases should alert companies and organizations of the importance of regulating language equality among their staff. Perhaps the reason that cases of language discrimination keep occurring is because many English speaking Americans do not realize how important a native language is to an immigrant.

Language is an identity, it defines who we are. Even within a single country a different dialect can define a person. Most people can tell that a person grew up in Boston, or Texas, or California without even seeing the person, simply by the way they talk. If New-yorkers can be proud of their New York accent, why cant immigrants be proud or their native language? Our language, accent, and dialect is as much a part of our identity as physical appearance or the color of our skin. Compared to other countries America does not place a big emphasis on learning foreign languages in it’s school system. Because English is the most diverse language in the world, kids are not taught to value and appreciate other languages. By understanding the struggles of the double lives that immigrants must lead, *it will be easier to see why they put so much emphasis on preserving their native language. No one understands the struggles of assimilating into a new culture more than Chang-rae Lee, who describes the hardships his mother while learning English, in his essay “Mute in an English-Only World”. He talks about how much his mother struggled with even simple, every day activities, only because she did not know English. Lee describes how his other could be “fiery, stern, deeply funny, and ironic” when she spoke Korean, but in English less so. Some of her identity was stripped away by a new language, she was not the same confident and proud women when she was forced to speak an foreign tongue. No law or rule should be able to strip a person identity by forcing them to speak a language foreign to them. Some might argue that there is nothing wrong with the English-Only rules implemented in American companies. Immigrants should speak only English at work because they live in America, and in America we speak English. Yes, those claims do carry validity and those who immigrate to the United States should learn English, but should it be so strictly enforced? Ofcourse employees must be able to communicate with with coworkers and superiors, but should they be punished and abused while they learn the language? No, it is unfair and unconstitutional. America is not a county were one can simply live off the land and not have to work. Although there are programs such as Welfare which provide financial support for immigrants, they are not enough to fully support a family without supplementary income.

As it already stands, most Americans oppose the newly proposed work requirement waiver. This means that you are required to maintain a job in order to receive benefits such as Welfare (Standard). Instead of encouraging non-English speaking immigrants to work and support themselves, English-Only laws only intimidate and hinder immigrants and further increase resentment towards them. Instead of scaring off potential employees with English-Only laws, companies should encourage immigrants to work for them in order to gain the many benefits they can provide. Encouraging immigrants to work will reduce unemployment, reducing unemployment improves the economy, and a better economy increases business success. By providing a better atmosphere for immigrant workers in the workplace, companies can create customers. Not only can the immigrants themselves become customers, they can also attract others. In his essay, Lee talks about a trip to a deli with this mother. After finally mustering the courage to visit this deli, Lee’s mother was scared off by the shop keeper who could not understand her Korean. After his mother said soggori “[t]he butcher looked as if my mother had put something sour in his mouth, and he glanced back at the lighted board and called the next number” (Lee). The deli owner lost her business and the profit that came with it. It might have gone much differently if he had a Korean worker that could help Lee’s mother out. As an immigrant myself, I can relate to Lee’s story. As I walk to school everyday I pass by a bakery, there is nothing special about it, nothing that stands out. For a few weeks I walked past the bakery with no intention to go inside, until one day.

On one Tuesday morning as I was walking my normal route I heard someone speaking Russian, when I turned to see who it was I that it was two employees of the bakery. Exited to hear my native tongue I came inside the bakery and introduced myself. After talking to them for fifteen minutes or so they recommended some good for me to try from the bakery. Ever since that day I always stop by that bakery to see my fellow comrades and buy an item or two. After talking to them I found out that they had just recently arrived to America and spoke very little English. They were hired at the deli despite not knowing English, because the owner valued their skill and did not have an English-Only policy. Not only were they able to be productive members of society and provide for themselves, but they were able to quickly learned English at the friendly workplace. The bakery owner gained a loyal customer because chose to focus on the benefits of immigrant employees. All companies want the maximum potential customer base. Immigrant and bilingual employees with invite new demographics of customers, increasing customer base. Companies need immigrant and bilingual employees. In conclusion American companies will increase their income potential and reduce discrimination among employees if they get rid of their English-Only policies. No one benefits from enforcing these limiting rules. The minority group(s) upon who these rules are enforced are being stripped of their freedom of speech. Language is part of a person’s identity and should not be silenced. Not only does the law target minority groups who are already struggling to assimilate into a new culture, but it also promotes further segregation. As in one of the examples, workers openly harassed their coworkers, backed by a discriminative English-Only rule at Delano Regional Medical Center. Not only are English-Only rules at a workplace a violation of the basic human freedom, they are very costly to companies. The negative publicity created by such cases can have an even more devastating effect on companies than the millions of dollars they must pay out to settle the case. English-Only policies create a hostile workplace environment, reduce employee moral, promote discrimination, and reflect very poorly on the name of the company, while removing such policies will increase customer base and create an overall better economy; therefore, American companies should eliminate English-Only policies

Discrimination Is Expensive, Inclusion Is Profit. (2016, Feb 28). Retrieved from https://studymoose.com/discrimination-3-essay 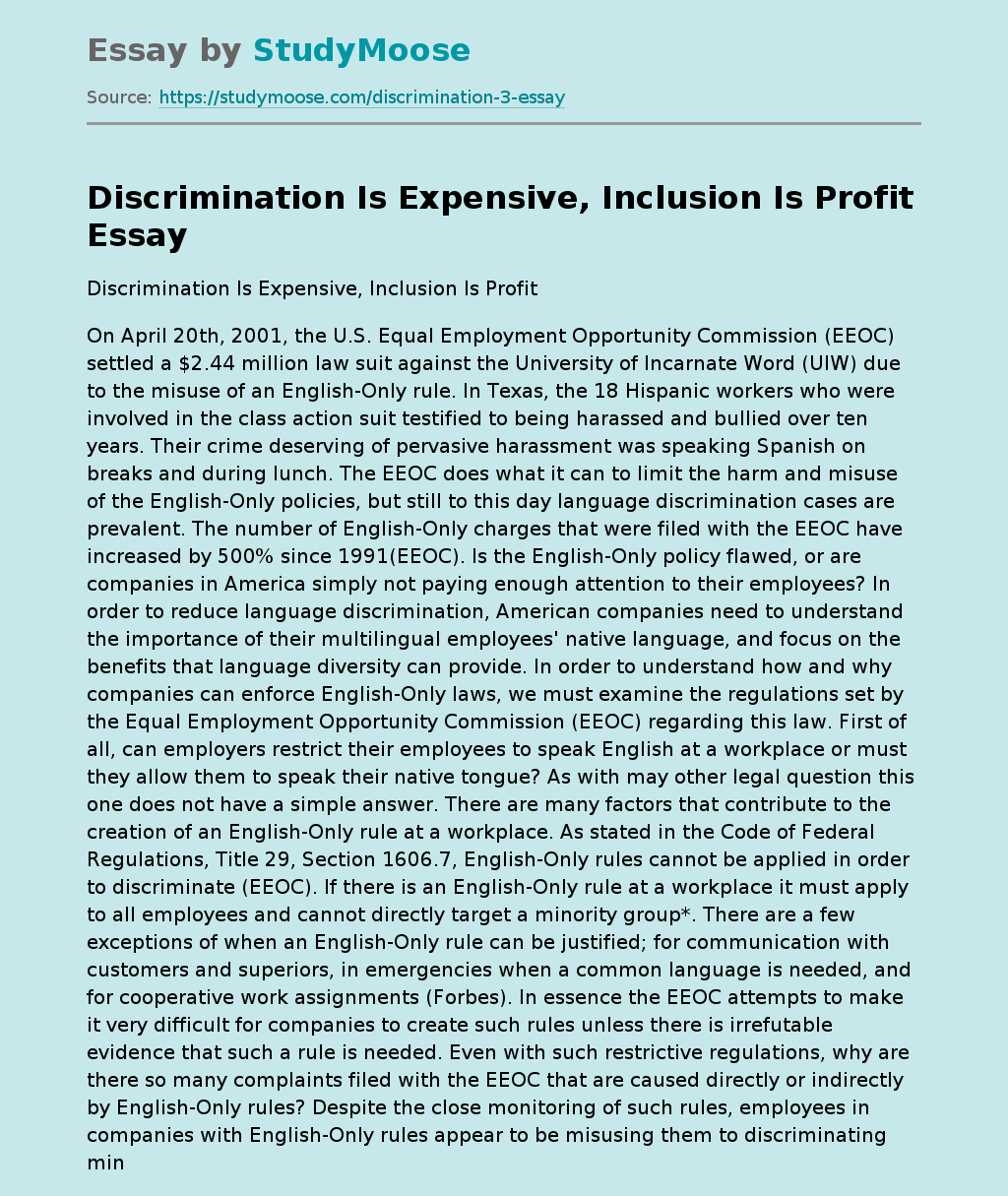