For as long as I can remember, South Asian Art has always intrigued me. Whenever I visit museums, I find myself feeling particularly drawn to Non-Western Art styles. In the Philadelphia Museum of Art, I immediately was amazed by the beauty and the fine detail of a Tibetan Home Altar. Its’ warm, vibrant colors caught my attention, and I was fascinated with its intricate details and the copious symbols existing within this masterpiece. This art work is called the “Home Altar” and is placed on the second floor of the Philadelphia Museum of Art in room 225.

Don't use plagiarized sources. Get your custom essay on
“ Discovering A Spiritual Path ”
Get custom paper
NEW! smart matching with writer

According to Exploring Art: A Global, Thematic Approach, “A cultural style consists of recurring and distinctive features that we see in many works of art emanating from a particular place and era,” (Lazzari and Schlesier, p. 9, 2018).

Essentially, this quote establishes that a cultural style has recognizable features in certain pieces of art from a distinct area because it is reflective of the culture in which the artist lived. In the Philadelphia Museum of Art, this piece is considered a Buddhist Altar. They stated on a placard in the room that many Tibetan cultures of this era followed a regional form of Buddhism known as Vajrayana.

They also claimed that each piece of Tibetan art was created as a tool that helped and guided people to their spiritual paths. Moreover, after researching this piece I also discovered that this “Home Altar” can also be considered naturalistic and representational. In class, we discussed how naturalistic styles contain pieces of imagery that are typically seen in nature. I feel that this piece certainly displays that because it has several paintings of animals and flowers depicted. Likewise, I feel that this piece can also be viewed as representational because all of the images have a greater meaning. For example, many Tibetan people of this culture viewed cranes as symbols of immortality. Another example of a recognizable entity in this piece is the placement of lotuses, which are meant to represent purity and innocence.

Clearly, this intricate piece can be viewed in several different fashions, however, I feel that it predominantly has a cultural, naturalistic, and representational style. Next, at the museum, I read that this piece of art’s medium was wood with polychrome decoration and leather fittings. Polychrome decoration basically means decorating an architectural piece with an array of colors. This piece embellishes that standard through the use of distemper paint, which is pigments suspended in animal glue. This concept is similar to what we learned in Chapter 3, where people use liquid binders (an animal substance) to create a more uniform consistency of the paint. On a similar note, this brilliant altar also applied tin and brass to its surface through gilding to imitate the appearance of gold.

Clearly, the presence of gold gives off the idea that the owners are wealthy enough to afford good quality pieces and are in a strong financial standing to contract artists to create these expensive works for them. In addition, the website explains that the creator of this piece also used khyung bur, which is another term for a raised decoration in Tibetan. Most importantly, this piece of art is primarily red, which is considered to have religious significance in Tibet. The website shared that many temples and clothing of monks and nuns shared this favorable color. By the same token, the Philadelphia Museum of Art’s website explains that this piece would have been commissioned by a wealthy family. Wealthy Tibetan families would have large altars installed into their homes to be used during daily worship. During worship, altars like this would hold images of deities while they prayed and offered them things like incense, beverages, food, etc. The label at the museum explained, “(The Home Altar)’s niches and shelves would have displayed sculptures of deities, ritual tools, and photographs of other mementos of great teachers and monks,” (Philadelphia Museum of Art, 2018).

Clearly, the meaning and intention of this work of art was meant to be a place of worship. In chapter 7, we talked about how most cultures throughout history have believed in a supernatural realm which lies beyond our senses. In regard to this Tibetan Altar, these individuals would have used this piece of art as a sanctioned area to worship and focus on their Buddhist goal of one day attaining enlightenment. Building off of that note, this “Home Altar” is certainly a reflection of the culture in which it was produced. Like I stated prior, this piece of art was estimated to have been created between the Late 19th – early 20th century in Tibet. In this area, they practiced a form of Buddhism known as Vajrayana. In class, we discussed how Buddhism originally formed from Hinduism. Both religions follow the teachings of Siddhartha Gautama, who was a prince who fled his riches and became a humbled man who eventually achieved enlightenment. Buddhists follow in his footsteps in the hopes of one day breaking the cycle of reincarnation and attaining ultimate peace, or nirvana.

Likewise, this piece completely embodies Buddhism because it has several depictions of Buddhist deities displaying their wishes for prosperity and happiness for the family. In addition, this altar also has various images of symbolism. It depicts several images of lotus flowers, and as the website claims, is one of the most important motifs of Buddhist art. Moreover, The Philadelphia Museum of Art also shares that the painted panels on this altar are also full of imagery. There are depictions of two white cranes which symbolize longevity, and a man with a female deer representing domestic harmony, and lastly, an elderly bearded man who indicates a wish for the family’s souls to attain immortality.

Evidently, this “Home Altar” is a record of the culture that produced it because many individuals of this era practiced religion frequently in their home and hoped to follow in the footsteps of Siddhartha Gautama. Prior to researching this art work, I had already viewed the “Home Altar” as a magnificent piece. My parents own an antique furniture business, so I have developed an eye for beauty in certain furnishings from an early age.

However, after study the importance of what this altar meant for a Buddhist Tibetan family, I feel more well versed about their culture. These individuals worshipped deities and strived to one day reach nirvana. I have always found Buddhism interesting, and I am glad that I chose to study this piece because I feel that it has opened my eyes to the history of how these individuals discovered their spiritual path. 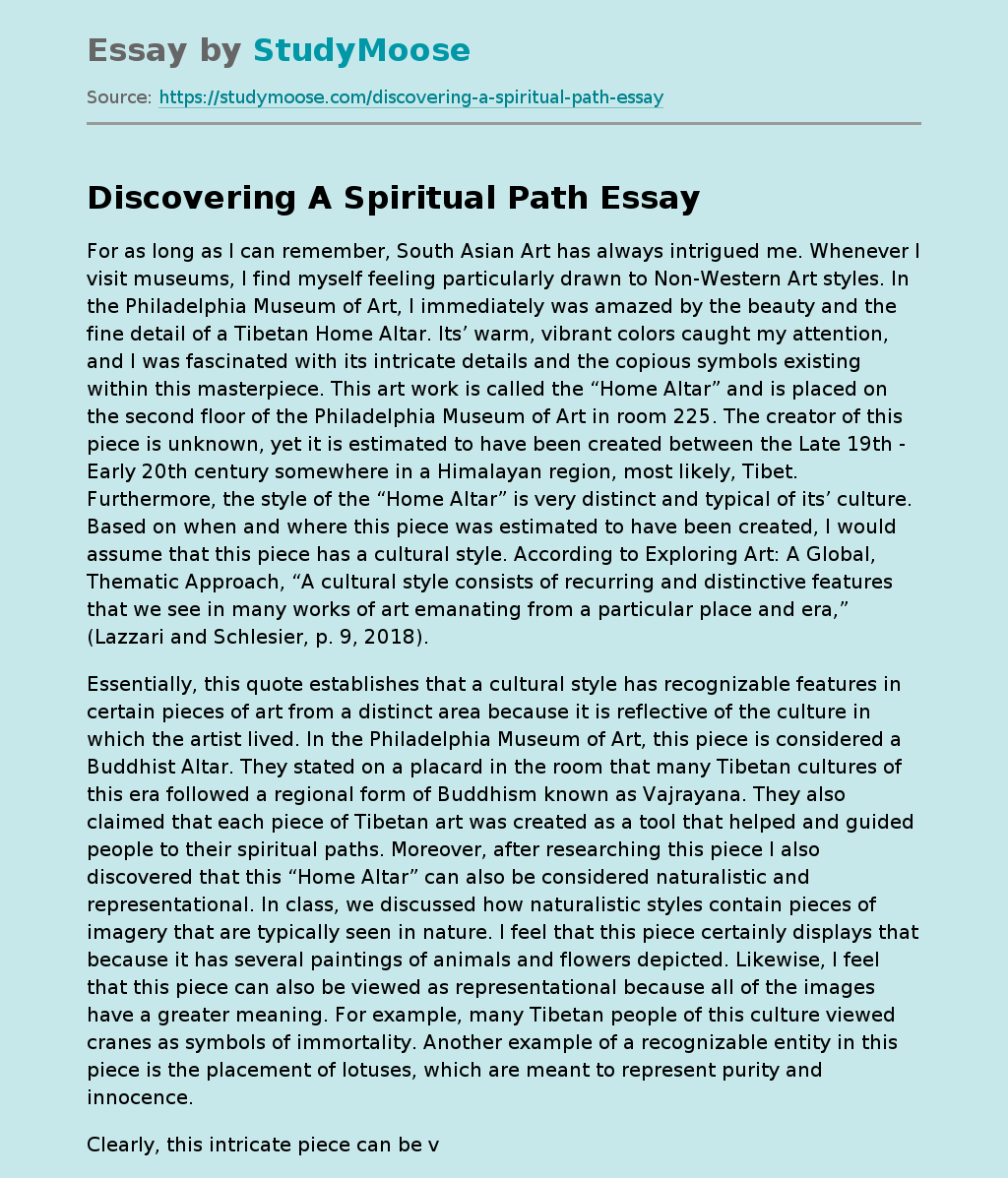