Nowadays, it is hardly surprising to cross at least five different nationalities on one’s way out of the house to the supermarket. America has done well over the centuries after it has achieved its own independence in 1776; it has managed to take up the world by storm. People from many countries, developing or not, wants to share the American way of life, which they refer to as the American Dream. Many migrants were able to get this, and as such, America has been a mix of ethnicities, cultures and nationalities.

Don't use plagiarized sources.
Get Your Custom Essay on Different nationalities Just from $13,9/Page

Living in such a diverse country is an exercise of respect which has been the foundation of the current world civilization.

Given today’s globalization, Americans are used to seeing immigrants working in all sorts of professions, from the white collar worker, easily earning up to $250,000 in annual salary to a janitor. These people came from all sorts of location, from the developing countries in Asia and South America, from first world countries in Europe and even in Australia.

Being an immigrant in America entitles them to bring their family in the country, after all paperwork has been completed. With more time and even more paperwork, they become legal American citizens, if they choose to and their children will start a whole new generation of Americans.

Such is the reason why the country is so diverse and rich in culture. People from different races who settle in America have the right and duties as all Americans. They pay their share of government levies and taxes and as such, they get the same benefits the government extends to citizens. Their children have the right to get education for free in the nation’s public school system. In the classroom, it is imperative that children learn equality amongst themselves. Race, speech, religion or color of skin is not a determinant of superiority.

America is all about independence and equality and it is best that children understand this as early as possible. Dealing with children is always a noble and exciting experience. They are sweet and funny and honest to a fault. Sometimes this honesty can lead them to trouble. They do not yet have the restraint of adults and their words can hurt the feelings of others in their group. Kids can be helplessly taunting at times, just because they find another child to be different. The thing with kids from different races is that, they can be extremely self conscious about their appearance or their speech.

Taunts from another child are the last thing they need, as it can destroy the little self confidence that they mustered in the usually short time they have spent in the country. It is important to help them adjust to their situation in the classroom. School is essentially their second home, now that they have left their country of original domicile. To help them cope, the classroom should have an atmosphere of acceptance. Those who show intolerance of them must be singled out and spoken to, the nicest way possible so as to prevent any future biting remarks to others.

But of course, these incidences are not easy to find. Children can be angelic with the teacher inside the classroom but once outside, there is no telling what they can do or say to those they find different. The last thing a teacher would want is bullying among his/her students. The best way to reach out to children to be nice to one another despite of skin color is still through academics. There are a lot of stories to tell, parodies that can be made interesting by good story telling and moral lessons cannot really hurt anyone.

In addition to storytelling, children learn acceptance by the watching movies or little videos, still rich in moral lessons about acceptance, understanding and respect. All students are practically considered Americans now. They have equal rights and responsibilities and are subject to the same of Law of the Land. To emphasize this point, planning an excursion to understand America better can only help increase the children’s awareness of their nationality. They can understand better the land where they will grow up and become adults and accept each other for the benefit of the local community: Southwestern Pennsylvania.

The students in class who came from different nationalities and religion are mostly brought to America because of their parents’ circumstances. Likely, their families have settled in America for good because of the parents’ American Dream that is being fulfilled. It is all a testament to Labor. To celebrate the classroom’s diversity, Labor Day should be the focal point of the bulletin board. The children must understand the importance of work. A job is necessary to get by in one’s life and a lot of people have sacrificed a great many things for employment.

This includes leaving their families, traveling thousands of miles and not being to communicate with their loved-ones for long periods of time. Children must understand that before the kids from other nationalities have reached America, their parents have suffered tremendously to reach that American Dream. It is an admirable trait and only deserves respect from others. As such, the Labor Day shall be celebrated by the class through an excursion. History is always important to one’s sense of culture. Perhaps the most popular city in Southwestern Pennsylvania is Pittsburgh, which is known to many for its steel industry.

Among the city’s range of entertainment is the festival held for seven weekends, including Labor Day: The Pittsburgh Renaissance Festival. Such excursion is going to be a focal point in the bulletin board. The children will be asked to submit a two-page paper on what they learned about labor, history and becoming a native of Southwestern Pennsylvania after the trip. The Pittsburgh Renaissance Festival is going to be an adventure to the past. During the Labor Day weekend is when the excursion is going to take place. The theme of the park during such an adventure is Prince, Princess and Pirate Party.

Everyone in class can be in costumes, if they would like. For this day, they can be anyone they want, a costume is not going to be mandatory, but they will be encouraged to wear one. The park promises to dedicate the weekend to the enjoyment of children. There will a king and queen who will knight the kids. A teacher can only hope that the King or the Queen is from another racial descent so it can become a discussion in class on how the kids felt that their queen or king is from another race. It would be interesting to hear their points of view. At the end of the day, the moral lesson should be easy to spot.

America is a place where dreams come true. Anyone can become anything because of the support of the Mother Land, its assistance to help its citizens become honorable human beings, capable of achieving their dreams. Race and nationality are disregarded, religion is negligible, the important thing is one’s free will to become better in whatever path he chooses. References: Pittsburgh Renaissance Festival & Artisans Marketplace. (n. d. ). Pittsburgh Renaissance Festival. Retrieved, 31 July 2010 from http://www. pgh-renfest. com/Themed%20Weekends. html 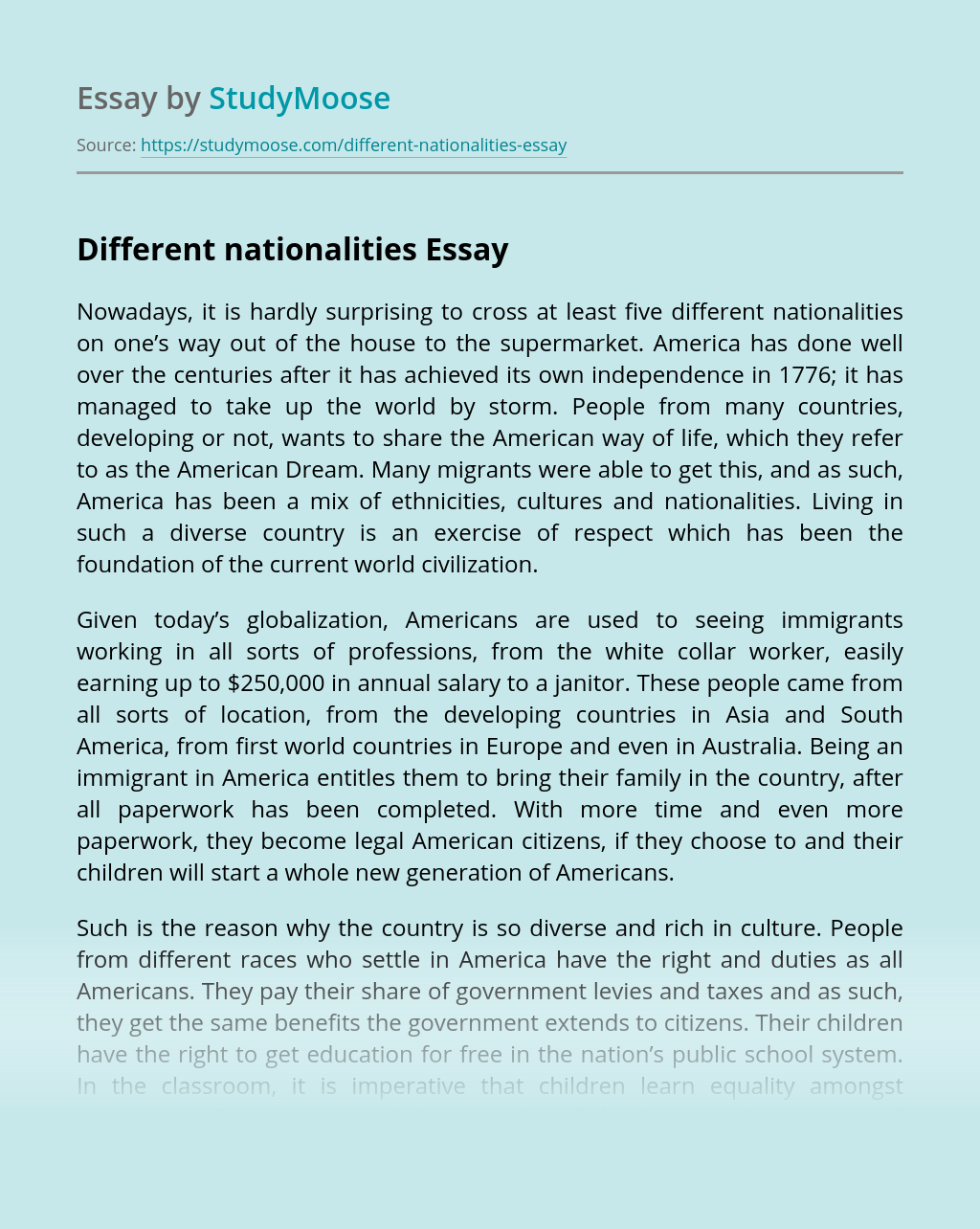 Rate this post Nowadays, it is hardly surprising to cross at least five different nationalities on one’s way out of the house to the supermarket. America has done well over the centuries after it has achieved its own independence in 1776; it has managed to take up the world by storm. People from many countries,...