Did Charles I Succeed in Implementing Royal Absolutism

I succeed in implementing royal absolutism during the period of Personal Rule? Royal absolutism is a state of government whereby the monarch rules supreme, with virtually no legislative power placed in other organisations such as Parliament. For the people of England in the 1630s, it was a very real threat. After the dissolving of Parliament in 1629, Charles I embarked on his Personal Rule. Without analysing whose fault the breakdown in relations was, it was probably the only thing Charles could do in the circumstances.

Don't use plagiarized sources. Get your custom essay on
“ Did Charles I Succeed in Implementing Royal Absolutism ”
Get custom paper
NEW! smart matching with writer

Certainly, no dialogue with Parliament was possible.

After 1629, the country became particularly distrustful of the King. Charles’ problem was he was an inept ruler whose belief in such ideas as the Divine Right of Kings and Royal Prerogative meant that he did not moderate his beliefs publicly. England needed stability, the Continent was a very real threat at the time, and England needed a monarch to represent England and its people’s principles. Unfortunately, Charles was not the right person.

There is much debate over the legitimacy of the image Charles attempted to portray during Personal Rule.

Evidence suggests Charles was simply a ‘collector of fine arts’, and simply wished to add lustre to his monarchy. The counter-argument is that paintings of Charles, the most famous of which were created by European artist Van Dyke, were presenting Charles as a ‘divine king’, implementing absolutism with images of the King atop large horses, looking out over his kingdom. Did Charles use these artworks to transform his public images, lend majesty to his physical attributes and glorify Monarchy? His clothes were often flamboyant, portraying wealth and royalty.

His face, calm and relaxed, implying that the King is laid back and in control.

This lack of emotion can also portray Charles a s a cool, calm and collected person, who has no trouble maintaining his vast Kingdom. The Court was the central point for Charles’ rule, a model for a reformed government and state. It was a microcosm of the Kingdom Charles intended to create and maintain. An example of uniformity and conformity at its finest. In his Court, Charles had made significant changes; the Court was now a completely different place to that of his father’s, James. James allowed his court to be free, letting people goes wherever and whenever they wanted. Charles kept a suppressive rule over his using strict discipline.

The court was disorganised under James. Charles replaced it with a formal regime, a model for moral restraint. Following a predominantly Revisionist view, Charles’ Court was simply a reflection of his strongly developed aesthetic sense. It portrayed an insistence on virtues of peace, despite the war. Possibly more than anything else, Charles’ government during the Personal Rule revealed his absolutist intentions more than anything else, starting with the privy Council, a group of the Kings selected advisors, who’s key job was to shape the Monarch’s wishes into policy. Despite Revisionists (such as D.

L Smith) believing that Charles “wished to use the council to implement a far reaching reformation of government”, it was used for a much greater purpose. It was used to remove the need for Parliament, leaving him in full control. He ruled this council with an authoritarian temperament, implying that he even strived for complete control in his own Council. The more powerful courts (also known as the Prerogative courts) were made up of the Star Chamber and the Chamber of High Commission were more powerful than the local or royal courts that would deal with the day to day matters of the Kingdom.

These courts would allow Charles to bypass regular laws and decisions made by lower down courts, in order for him to get his own way. Charles had complete control over the Government during his personal rule, and was blatantly portraying the characteristics of an Absolutist monarch. Charles’ financial innovations during his personal rule were an attempt to gain independence, No longer needing money from Parliament would be one step closer to becoming absolute.

People may argue that Charles simply needed the money to pay off large debts, also an attempt to neutralise the on-going feud with Parliament. His policies during this time were extremely absolutist. A good example of this is ship money, making it mandatory for all citizens to pay a tax that goes towards funding ships to protect the coasts. The problem was that as well as the people living on the coasts paying this tax, people living in central England were also forced to pay it. This was surely an unfair venture, and caused mass resentment throughout the country.

Religion was a key issue during the personal rule, with some believing Charles’ decisions regarding Catholicism and the newly discovered ‘Armenianism’ to be somewhat controversial. Right from the start of his reign, Charles had displayed Catholic sympathies as expressed in Arminianism, which some people called “Catholicism under another name”. But now with Parliament gone, there was seemingly no-one to keep the King’s beliefs in check and to remind him that England was a Protestant country. The King’s religious beliefs were of special concern thanks to the rapid promotion of William Laud, eventually to Archbishop of Canterbury.

Laud was an unpopular figure even by the King’s own supporters. Those opposing the King detested Laud for his Arminian reforms in the Church of England. Unfortunately for Charles, this did tend to unite people against him. The problem was that Puritans and Calvinists who opposed the Arminian innovations had good reason to be concerned. Laud’s changes were very Catholic in nature, including repositioning the altar so that staunch Puritans would say that the minister is blocking the route to God.

Laud tried to raise the status of the clergy so that they were “equal to any gentleman in England. ” He ordered that the private pews of the gentry that set them apart from the rest of the congregation be removed. This humiliated them. Arminianism was such an ambiguous idea that, while it was clear that it had many similarities with Catholicism, it was not clear whether it could be compatible with the Church of England. This question was raised directly in 1634 when the Pope offered Laud the position of Cardinal.

Of course Laud refused (if he had accepted, there is no doubt that England would have been thrown into turmoil), but his refusal was not strongly enough worded; he said that he could not accept “Rome as it is”. This seemed to suggest too many Puritans that Laud was intent on moving towards Catholicism, or at least Catholicism independent of Rome. It is important to realise that Laud was a key supporter of Charles and that any criticism levelled at Laud was also at Charles. Laud was the King’s instigator of his religious beliefs.

If the King did not believe completely in the principles of the Church of England, this was not a problem that would threaten to bring down the King’s rule. The trouble was the nature of Charles’ religious eccentricity. As already mentioned, it was very Catholic. And Catholicism was widely feared and hated in England. Charles’ rule was not confined to England. It could be argued that Charles’ rule of Ireland and Scotland were even more problematic than the tensions created in his other kingdoms would, ultimately have dramatic damaging consequences on his rule in England.

Through Wentworth, Charles intended to rule in the manner in which he hoped to eventually govern England, absolutely, efficiently and without regard to any interest but that of the crown; in how own word ‘thoroughly’ (Clarke. A). Charles also attempted to extend religious reform to Scotland, which was, in conclusion, rather unsuccessful. After implementing his changes, it was clear to see that Charles was a threat to Scotland’s power, and Scotland knew this too.

In an extremely absolutist manner, Charles had attempted to revoke many titles to Scottish crown and church lands that Scottish nobles had acquired since 1540. To conclude, Charles was most definitely an Absolutist leader. He strived for financial independence during his rule, following countless feuds with the English Parliament. His councils and chambers were able to bypass common law, therefore rendering him all powerful in that aspect. A second aspect was his court, which was a direct microcosm of what he believed his kingdom should be, a place of conformity and uniformity.

Had Charles been successful in his reforms in Ireland and Scotland, he may have pursued to become more powerful, though the revolution soon ended his reign of mediocrity. Most monarchs labelled as absolutist had no greater power to those who were non absolutist. Was absolutism simple a label used to emphasise difference between the rhetoric of monarchs and the realities of the effective use of power by these monarchs? Perhaps. The on-going question of Charles’ absolutist intentions will be never have a definitive answer.

Did Charles I Succeed in Implementing Royal Absolutism. (2018, Sep 25). Retrieved from http://studymoose.com/did-charles-i-succeed-in-implementing-royal-absolutism-essay 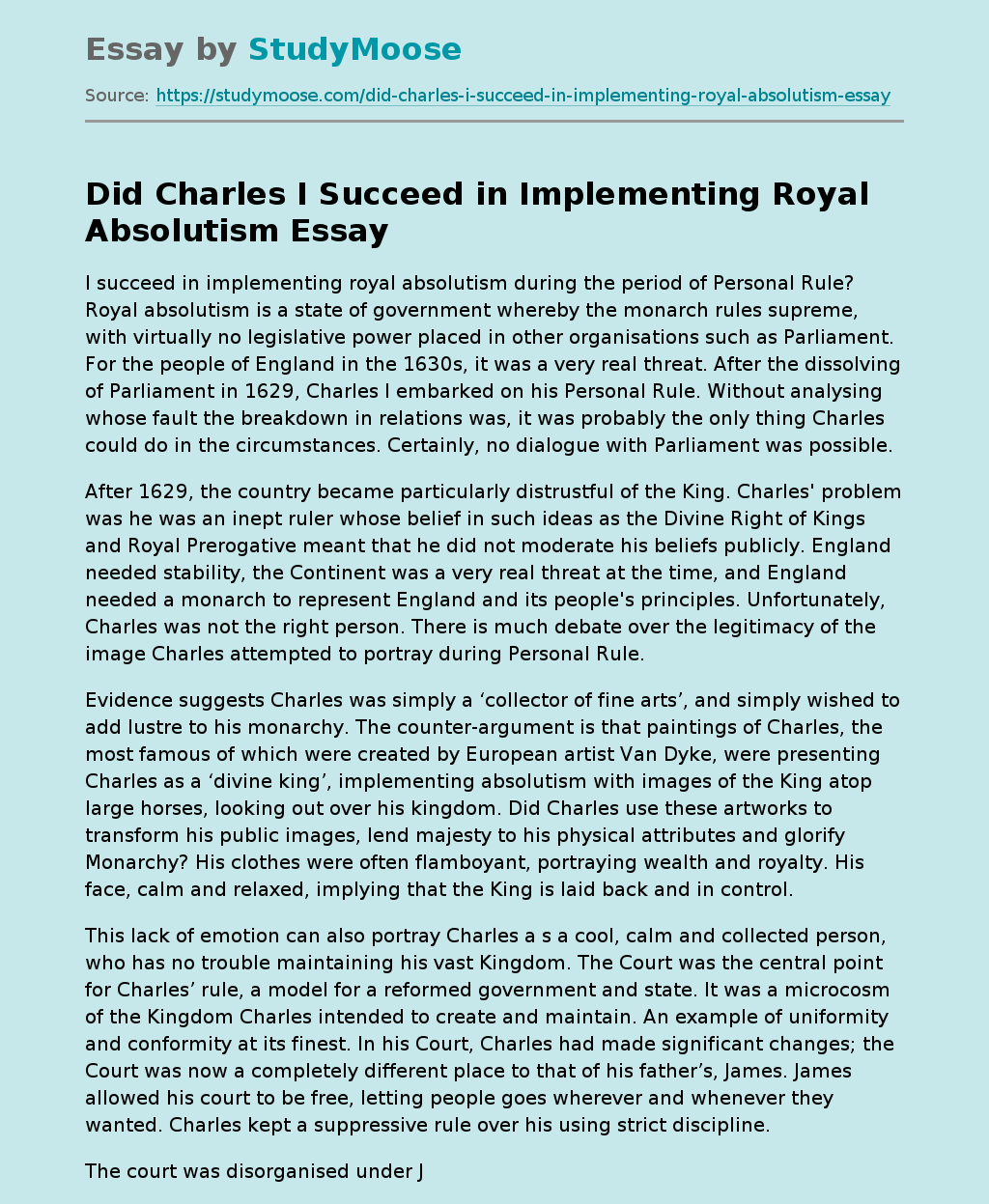