In this essay I’m going to talk about this question. Since this is a very wide subject I could talk about only a single country or a single issue, but I will try to discuss about the whole aggregate. Some of the main points are starvation, education, child labor, safety and human rights. These issues are very different in developed and developing countries. I’m also going to tell why these things are happening and how they could be improved.

Don't use plagiarized sources. Get your custom essay on
“ Developing countries ”
Get custom paper
NEW! smart matching with writer

Probably the most important issue is starvation; the result of a serious, or total, lack of nutrients needed for the maintenance of life. First of all it is one of the few words in the English language with no synonyms.

It is a word that stands alone. It should be fixed first. “Why?” You might think. “Why starvation, not for example education.” This is because, what is the point of building schools if the kids die because of hunger? There is no point.

Starvation is the most important issue of all the developing countries. Of course if a country does not have this problem, it will try to fix the next problem.

Some children are not strong enough to eat by themselves.

The facts about starvation in today’s world are shocking; today, there are some 800 million people who do not have access to sufficient food to meet their needs. Nearly 12 million children under five years old die each year because of malnutrition in developing countries of the world.

The two main questions about starvation are: why is it happening and how could it be stopped. Well, there are lots of answers because all the developing countries are different. Some have wars and some bad climate but the common thing is: they all have problems. This causes starvation. One source that I found even said that governments have the money and the abilities to get food for all the people, but they will get a great control by not giving the people food. “Many diseases, foods and medicines are deliberately made to weaken and control people. Starvation, death and poverty, deliberately caused to billions of people will also give the powerful, greater control” I don’t believe this, but you never know.

The solutions to the starvation are actually pretty simple. Developed countries could send food and other products. But this is not so easy since nothing is actually free. Of course developing countries could loan money but then they have debts to pay. How are they going to do that? In 1997 the foreign debts of developing countries were more than two trillion (million million) US dollars and still growing. The result is a debt of $400 for every man, woman and child in the developing world – where average income in the very poorest countries is less than a dollar a day.

Another way is that the food among the people in the country could be shared equally to all the people. Rich people could give money to poor people. Good example of this is Bill Gates. He is the richest person in the world and is giving constantly food to charity. All these factors are solutions to the problem called, starvation.

Education is another very important issue in developing countries. The more people getting educated, the more people solving problems. The wise man that said that was not Mark Twain, but me. Education is very difficult to get because books cost, schools have to be build, no one knows how to teach and families need kids to work and to get food for the family. If they go to school their parents might die of starvation. So these two problems are linked. Another reason for so many girls not going to school is that they are pregnant and no longer allowed there.

Education needs money but by only money it cannot be solved. There needs to be teachers who are willing to leave their homes and risk their health by moving to a developing country to teach. This is why there is so little education in developing countries. Education is very important to human future. People should get more educated.

Education is really needed; there are about 132 million people today in developing countries that are not in school. But the fact is that you cannot just give the people computers and other technology. You need to help people to help themselves. This has been proved at several studies. For example one study was made when certain group of people in a University realized that people in developing countries don’t cook their food well enough. So they started importing high tech sun panel cookers to the country. This caused that people did not gather around the fire like usually. More people got killed by wild animals because the fire was not there to keep them away. All these things happened and it was because of too high technology. So the group was trying the quick way which does not work.

Almost all the developing countries have a huge problem in human rights. This includes child labor and position of the women. Child labor is unfortunately very common in developing countries. Kids work all day and get really tired. If there would be good schools they would go to them instead of working. But what if the family will die because of hunger if the kid does not work? This links to starvation. All the problems are linked. The solution is that there should be help from better countries so that they won’t die of starvation, kids should go to school and when they grow up they would be educated and could get a job. So until every human in the country is educated and can earn the money to live for their family, the country needs help from rich people, wealthy countries, their own government etc.

Public safety as a problem is not as big as starvation or education but, this is the problem that anyone can have. Even in developed country public safety can be very low. It is difficult to get because you can’t get it neither with money nor political power. There needs to be more police and laws, but
that does not solve the whole problem. If a person wants to start killing people on the street and does not tell anyone, who can stop him? No matter how fast a police officer shoots him, the safety is bad.

As a conclusion to “the big question” I could say that the definition of a “developed country” is in everyone’s own mind. The differences between developed and developing countries are for example starvation, human rights, public safety and education. All these except education are the basic needs of a person to survive. If person’s main needs are not satisfied that person is living in developed country. What comes to education, it is in between of a basic need and a luxury. A person can live without it, but with education he/she can go further and help their own country to develop. 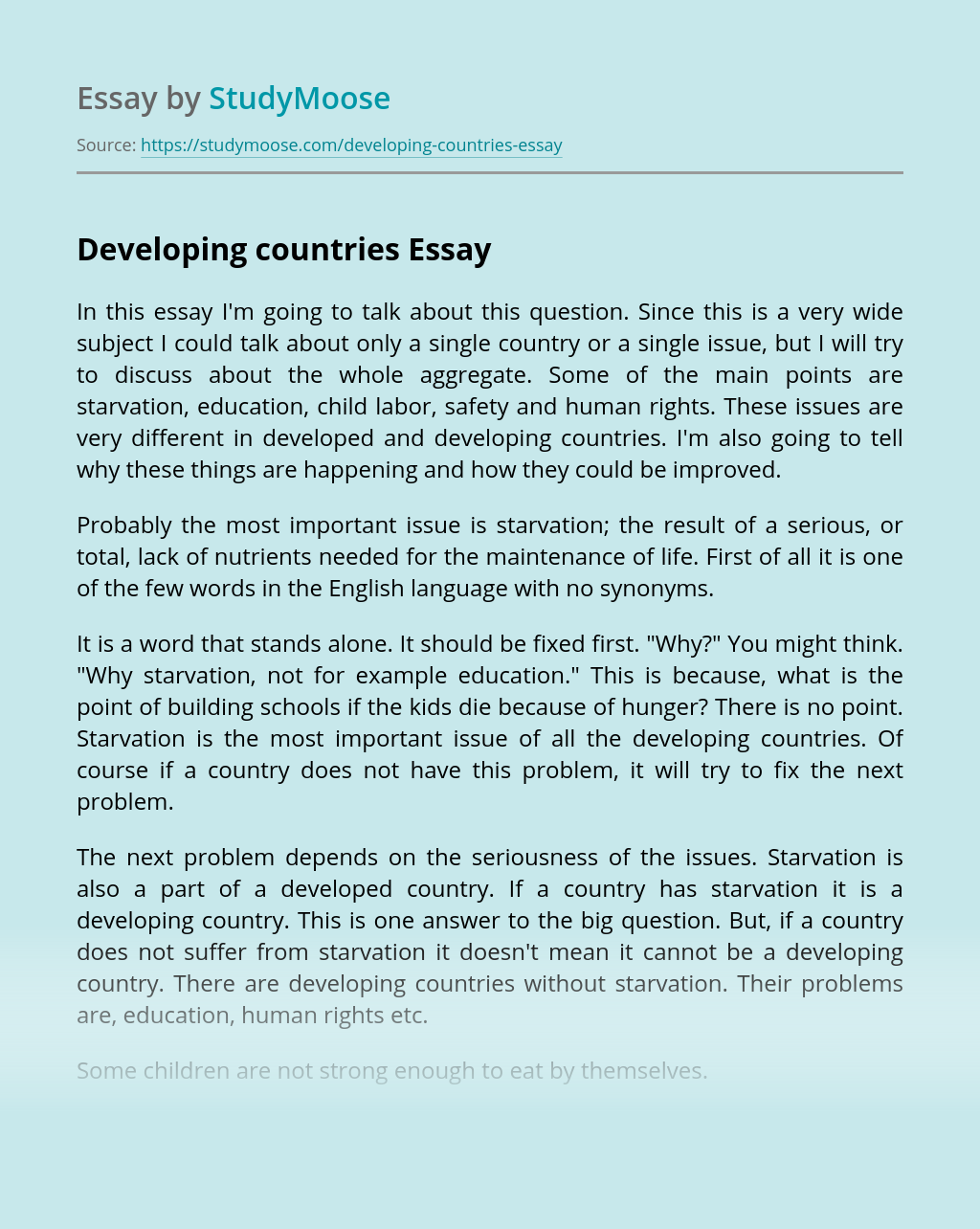