Deposit Mobilization of Commercial Banks in the Context of Nepal

Introduction Background Capital formation is one of the important factors leads to increase in the size of national output income and employment, solving the problem of inflation and balance of payment and foreign debts. Domestic capital formation helps in making a country self sustainable. According to classical economist, one of the main factors which helped capital formation was the accumulation of capital. Profit made by the business community constituted the major part of savings the community and the saved has assumed to be invested.

Don't use plagiarized sources. Get your custom essay on
“ Deposit Mobilization of Commercial Banks in the Context of Nepal ”
Get custom paper
NEW! smart matching with writer

They thought capital formation indeed plays a deceive role in determining the level and growth of national income and economic development. In the view of many economists, capital occupies the central and strategies position in the process of economic development in an underdeveloped economy lies in a rapid expansion of the rate of its capital investment so that it attains a rte of growth of output which exceeds the rate of growth of population by the significant margin.

Only with such rate of capital investment will the living standard begin to improve in developing country.

In developing countries, the rate of saving is quite low and existing institutions are half successful in mobilizing such savings as most people have incomes so low that vertically all current income must be spent in maintain a subsistence level of consumption. Investment is an essence of the national economy. Banking system is the integral part of investment system in productive sector. It involves the sacrifice of current rupees for future rupees.

It is concerned with the allocation of present fund for later reward, which is uncertain.

When people deposit money in a saving account in bank for example; the bank must invest the money in new factories and equipments to increase their production. In addition borrowing from the banks most issues stocks and bonks that they sell to investors to raise capital needed for business expansion. Government also issues bonds to obtain funds to invest in such project such as the construction of dams, roads and schools. All such investments by individuals business and government involves a presto sacrifice of income to get an expected future benefits. As a result, investment raises a nation’s standard of living.

For the development of any country, the financial sector of that country in responsible and must be strong. The financial sector is vast field, which comprises of banks cooperatives, insurance companies, financial companies, stock exchange, foreign exchange markets, mutual funds etc. These institutions collect idle and scattered money from the general public and finally invest in different enterprises of national economy that consequently help in reducing poverty, increase in life style of people, increase employment opportunities and thereby developing the society and country as a whole.

Thus, today’s concept, the financial institutions and commercial banks has become one of the bases for the measuring level of economic development of nation. Commercial banks are the main source which motivates people to save their earnings. Bank deals in accepting the saving of people in the form of deposit collection and invest it in the productive area. They give the loan to the people against real and financial assets. They transfer monetary sources from savers to users.

In other words, they are intermediate between lender and receiver of fund they mobilize the depositor fund. After the liberalization of the financial sector, financial sector has made a hall mark progress both in terms of the number of financial institutions and beneficiaries of financial services. At present, Nepal Rastra Bank licensed bank and non bank financial institutions totals 186. Out of them, 17 are commercial banks, 29 development banks, 63 finance companies, 11 micro credit development banks, 19 saving and cooperatives and 47 NGO’s. Focus of the Study

Major focus of the study is about commercial banks and their deposit mobilization. This study concentrates about the meaning of commercial banks and their functions, mainly consists the study of deposits, the characteristics of bank loan reflects on the position of bank deposits and aggregate allocation of credit on different sectors of the economy. Commercial banks are those institutions, which deals in accepting deposit of individual and giving loans. These banks provide working capital needs of trade, industry and even to agricultural sector.

Moreover commercial banks also provide technical and administrative assistance to industries, trade and business enterprises. They transfer monetary sources form savers to users. Commercial bank is a corporation which accepts demand deposits subject to check and makes short terms loans to business enterprises, regardless of the scope of its other services. The commercial banks play an important role in the modern economy. Commercial banks are the heart of financial system. They make fund available through their lending and investing activities to borrowers, individuals, business firms and services.

Development by its means is not possible within a short period and it takes a long time for the proper development of a country, it has to build up infrastructure. In Nepal, the process of development started only after 1956 A. D. when the first five year plan came into practice. Capital in fact, plays the leading role for the economic development of a country. But in Nepal, there is shortage of capital. There are various sources of accumulating capital internal and external sources. Under external sources: aid, grants and loans are the main sources.

In internal sources: accumulating capital, taxes, public enterprises, public debt are the popular in our country. But due to underdevelopment, poverty, lack of banking knowledge the desired capital for the development of the country cannot be accumulated from those internal sources. So, it can be said that in Nepal’s present situation bank deposit is dependable and permanent sources of capital accumulation. The need of deposit mobilization for economic development of a country is no more to question. But we are facing an acute problem of resources mobilization.

Banks and other financial institutions play important role to increase economic standard for the development of the country. Economic development becomes slow if there are incomplete and unfair banking facilities. Especially commercial banks provide different economic and technical facilities to the people who involve in business activities. Commercial banks plays major role in collection of scared small savings form depositors and transfer these funds into productive sectors for the economic development. As the research done in any field there are several key factors that cannot be avoided, in which significance of study also occurs.

Mainly this study covers the deposit and credit position of commercial banks, so it helps to reveal the financial position of banks and study occupies an important role in the series of the studies on commercial banks. The significances of the study are: • Important to know how well the bank is utilizing its deposits. • Important to policy formulator and also be useful for academic professionals, students particularly those involves in commerce, CA and financial institutions to formulate policies and plans on the basis of the performance of the bank. Important to the management party of selected banks for the evaluation of the performance of their bank and comparison with other banks. • Important for the investors, customers (depositors, loan takers) and personnel of bank to take various decisions regarding deposits and loan advances. • This study will be equally important to the others who are interested to know about the area. It may encourage to researcher to research further. Limitation of Study This study is conducted for the partial fulfillment of Master Degree in M. B. S. nd prepared within time constraints which will weaken adequacy of the study. Whereas, researcher will try to keep the report more feasible, accurate and fulfill even there are some limitations. These limitations can be point out in the following points: • The accuracy of the finding depends on the reliability of available information. • This study covers only limited year’s period i. e. only 5-6 years. • The qualitative factors such as growth, expansion, policies, quality of services, effectiveness of management etc have been ignored. The non availability of various resources also acts as constraints. • This study concentrates on deposit collection and utilization by commercial banks. Organization of Study This study is done as a partial fulfillment of the requirement of M. B. S degree. According to this requirement, the whole study has been divided into five chapters. Chapter I: Introduction Chapter II: Review of Literature Chapter III: Research Methodology Chapter IV: Presentation and Analysis of Data Chapter V:Summary and Conclusions The intension behind this kind of organization is to follow a simple research methodology.

Deposit Mobilization of Commercial Banks in the Context of Nepal. (2020, Jun 01). Retrieved from https://studymoose.com/deposit-mobilization-of-commercial-banks-in-the-context-of-nepal-new-essay 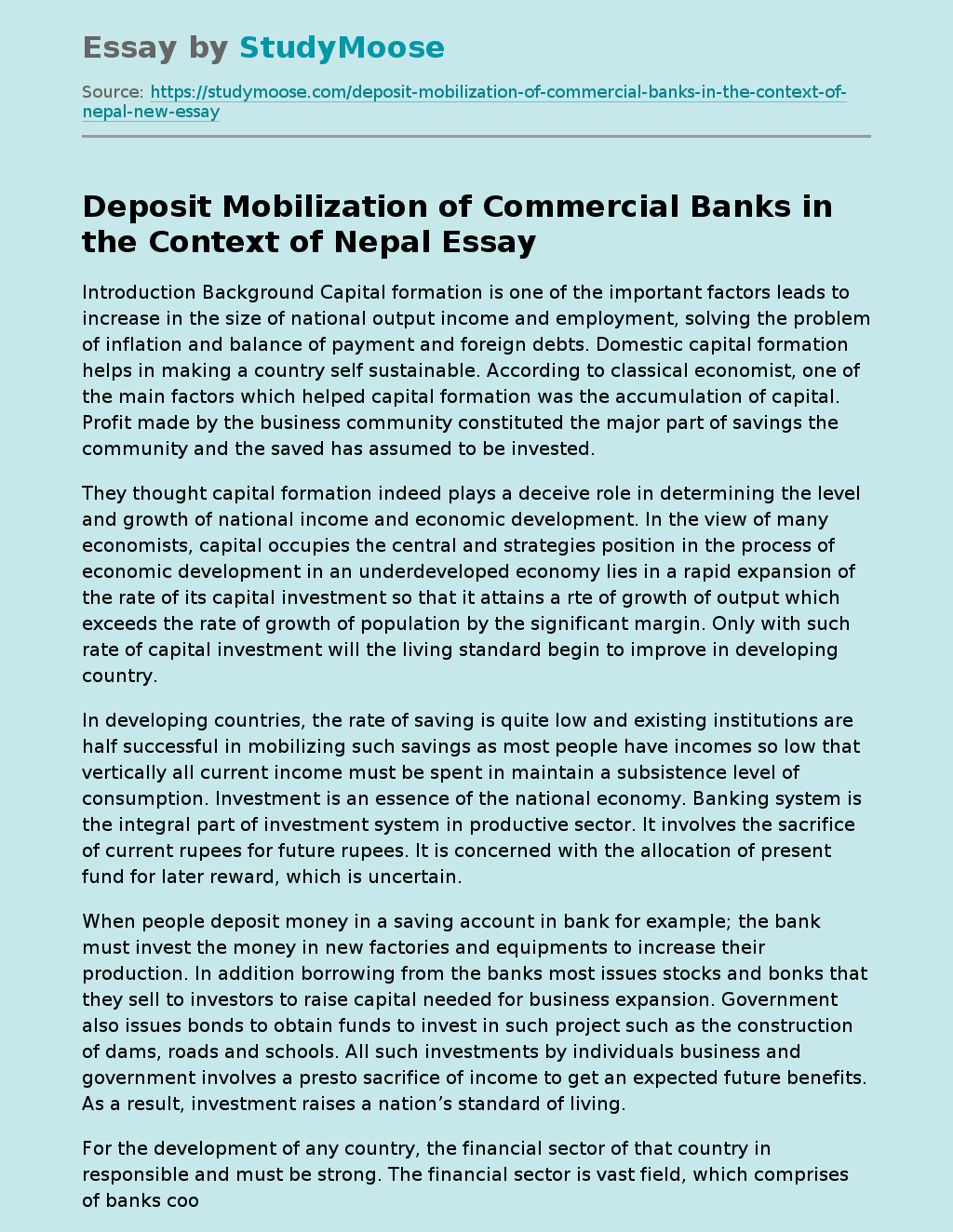