Italy before 1914 had already faced domestic problems resulting from her conquest of Libya in 1911. The conquest of Libya drained her economy and exhausted her army. At home, she was deeply troubled by the resentments of the socialists and anarchists that weakened her industry and population boom exacerbated her domestic problem where development was not equal and Italians were not united under the rule of the house of Savoy.42 Hence it is strongly argued that Italy’s participation in the World War to was a suicide.

Don't use plagiarized sources. Get your custom essay on
“ Mass Mobilization in Italy ”
Get custom paper
NEW! smart matching with writer

Italy’s problem at home was quite similar to that of Germany. Class struggle, strikes and riots, overwhelmingly elitist parliamentary system not only challenged the political integrity of the ruling elite and her political stability, but had also affected her international affairs when France, due to Italy’s own problem at home, had his hands in Tunisia in North Africa Italy considered to be her zone of influence.43 A transformist government was created to suppress unrest at home and asserted Italy’s interests abroad.

44 This scenario not only marked an aggressive politicization of the masses but on the other hand, also provoked collective action among the Italian people and provided a seedbed for future Italian fascism.

Describing scenario before the World War I, Alexander De Grand argues, Italian socio-political and economic landscape should be looked upon from two angles, the ruling class and the general Italian mass and the relationship between the two. The gap was extremely wide, the general mass of Italian society were poor, illiterate and had no participation nor say in the national politics contrary to the ruling elite.

Four groups made up Italian socio-political structure, namely, the political class, dominant interest groups, the intermediate elite, and the mass base.46 Strained relationship between and within each of these levels of Italian society had caused unrest and later provided seedbed for the Italian Fascism.47 Mass mobilization in Italy started with passive Sicilian peasants revolt in 1893-4 and in 1898 an organized workers’ riot in Milan and other cities.48 Massive shortage of food especially staple food like bread, overtaxing by the state, other oppression on farmers was the major cause for violent protest took place as early as 1891, however efforts were made by Pope Leo XIII who pleaded for workers’ wages to be increased and improvement in child and female labor welfare.49

Dissatisfaction among Italian workers and peasants also stemmed from burdening tax imposed on them by the ruling class, or the provincial governments. Workers and peasants suffered the most burden from over taxation imposed by the provincial governments, where dazio or a local tax of ten percent to fifteen percent were imposed on flour, bread, pasta and other staple foods and even a Tuscan landlord considered it to be ‘a genuine regime of oppression’.

The absence of central government supervision and any public expenditures to benefit the propertyless further intensified dissatisfaction among the lower class of the Italian society.51 On the other hand there was misuse and corruption among the ruling classes, in the words of Italy’s Prime Minister himself, ‘the ruling class spend enormous sums of public money on their own exclusive interests, while using their over-reprsentation in parliament to reduce their share of taxation’ and the poor was imposed to pay tax on salt, on gambling, the dazio on grain.52

At political level, brutality was also practiced by the officials in the electoral process under the premiership of Giolitti. Government opponents were ‘threatened, bludgeoned, besieged in their homes, leaders of the opposition were thrown into prison, voters were refused polling cards and favorable voters received double cards…Giolitti sold prefects in order to buy deputies’.53 Under Giolitti regime, the practices of latifundists provided him majority, when many Italian political institutions, courts and universities were staffed by the sons of his close cronies who later became propagators of Liberal ideology.54 Giolittie’s regime is described as ‘coalition based on patronage and the enjoyment of power’.55 Furthermore, ‘the exclusive access of the propertied class to political power thus guaranteed that the Liberal government’s policies were consistent with their interests’.56 These were the social, economic and political scenarios in Italy before World War I under the premiership of Giolitti’s regime.

Strong wave of protests and strikes are said to have started before the development of large factories, this is one peculiar aspect of Italian workers’ protest.57 Historian of Italian labour protests, Stefeno Merli argues that working class consciousness in Italy was formed by the experience of factory production and labour in the late nineteenth century.58 However, this idea was opposed by D. H. Bell who argues that ‘the advent of the factory and new technologies prized open the surviving hierarchical and corporate divisions within a skilled labour force with strong artisanal traditions and brought weaknesses and division rather than solidarity.’59

Towards the end of the 19th century working class began to form workers’ movement and Italian Worker’s Party was founded at Genoa in 1892 and three years later changed its name to Italian Socialist Party (PSI).60 Two decades before the World War I broke out, the Italian Socialist Party had broken the narrowness of the parliamentary system by bringing in the mass into Italian politics.61 Attempts were made to suppress the broader incursion of the mass into politics but were not successful and as a matter of fact backfired.62 It took another turn when politics of repression ‘gave way to a new search for the accommodation with the masses and with organized labor’.63 This also marked a new era for political socialism and popular socialism for the Italian working classes.64

Like Germany, workers’ movement in Italy and in this respect Italian Socialist Party, were also affected by socialist idea of Marxism.65 Italian Socialist Party however were caught up between ideological inconsistency held by the previous Italian leaders such as Mazzini and others such as Giuseppe Ferrari, Carlo Pisacane and Garibaldi who were convinced democrats. Louis A. Tilly argues that Italian working class organization has never been largely influenced by Marxist model and was rather inconsistent in terms of having sense of organized direction.66 Yet, they were all united by a single ideas and aim to eradicate ‘social evils and inequalities of the new Italy.

However, within the Italian working class there were rivals between clerical and anti clerical factions.67 The Catholics were also rivals to the Socialists and caught up at very speedy pace.68 ‘With a more varied constituency made up of workers, peasants, clerks, shopkeepers, and professional types, and with some support from government officials and the Liberals’.69 Thus it is argued that mass politic emerged in Sesto before the World War I.70 In terms of social reforms, the period 1900 to 1914 saw insignificant legislative progress and fragmentary.71 However, some reforms to upgrade standard of living became more significant and effective in 1915 and before that but only certain sector of workers – skilled ones, benefited from them.72

There was a turn of events especially during the war period when Italy witnessed remobilization of its mass whereby the closing of factories for the war purpose were closed which resulted in thousands of employees went into the streets demonstrating against an explosion of wartime inflation.73 Strikes, violence and bloodshed and the petty bourgeoisie who came to term with the nationalist complaints about the Allies’s treatment of their country.

On top of this international crisis affecting Italy, she also had to deal with factions and conflict within workers’ parties in which Socialist leadership was discredited for accepting the war and their support for the Communist International drew them closer to Communist positions.75 At grassroots level, peasants were taking over great estates, riots and strikes caused chaos for industry and cities into confusion.76 In September 1919, Cabriele d’Annunzio a famous Italian poet, called for Italian people to march on Rome and vocally and poetically called for a new corporatist constitution and around him storm troops, the arditi, gathered; slogans were hammered out – “A chi e Italia?” “A noi!”; the mood developed which Mussolini would eventually exploit.

However Donald Sasson argues that Mussolini advances was over shadowed by Annunzio and the massive strikes that took place in many Italian cities and concurrently, the Socialist party was advancing and a new party, Catholic Partito popolare was also growing rapidly and its membership swelled from 100,000 in 1919 to 255,000 in 1920.78 Although not leading any party, Mussolini had a “movement”.

Fasci di combattimento with which he demanded for the extension of the suffrage to women, lowering the voting age to eighteen, the abolition of the upper chamber (the Senate), vague corporatist demands for ‘national councils’ of representatives of the main sectors of industry, a minimum wage, an eight-hour day, workers’ representation in the workplace, the nationalization of the armaments industry, a tax on the rich people, the confiscation of Church property, and special tax on war profits.79 Impressed by Mussolini’s new but vocal anti-parliamentarism movement and irked by Giolitti’s corruption, a group of largely middle class veterans approximately two hundred of them met in Milan on 23rd March 1919 to launch a new movement later moved towards fascist orientation.

Industrial Revolution had changed the demographic feature in Europe and this demographic feature determines the enormity and effectiveness of mass mobilization in Europe, especially in the case of Germany and Italy. Germany belongs to the western part of Europe had better advantage in term of getting earlier development in its industrial cities as a result of Industrial Revolution whereas Italy belongs to the southern part of Europe was lagged behind.

This efficiently made politicization and mobilization of the mass on the part of the German rulers successful. This is well demonstrated by the willingness of the German mass to support the Great War waged and initiated by their rulers and the bourgeoisie despite the clash between them before the war. These factors were not possessed by Italy that made her involvement in the Great War can be said as suicidal.

Germany and Italy share the same pattern of mass mobilization after the war. The war drained their economies and at the cost of the German and Italian workers led to massive workers unrests and this effectively united the workers and also those bourgeoisies who resented the corruption and oppression committed by the ruling class thus, gave way and legitimacy for the workers movements to gain more influence, followers and power. 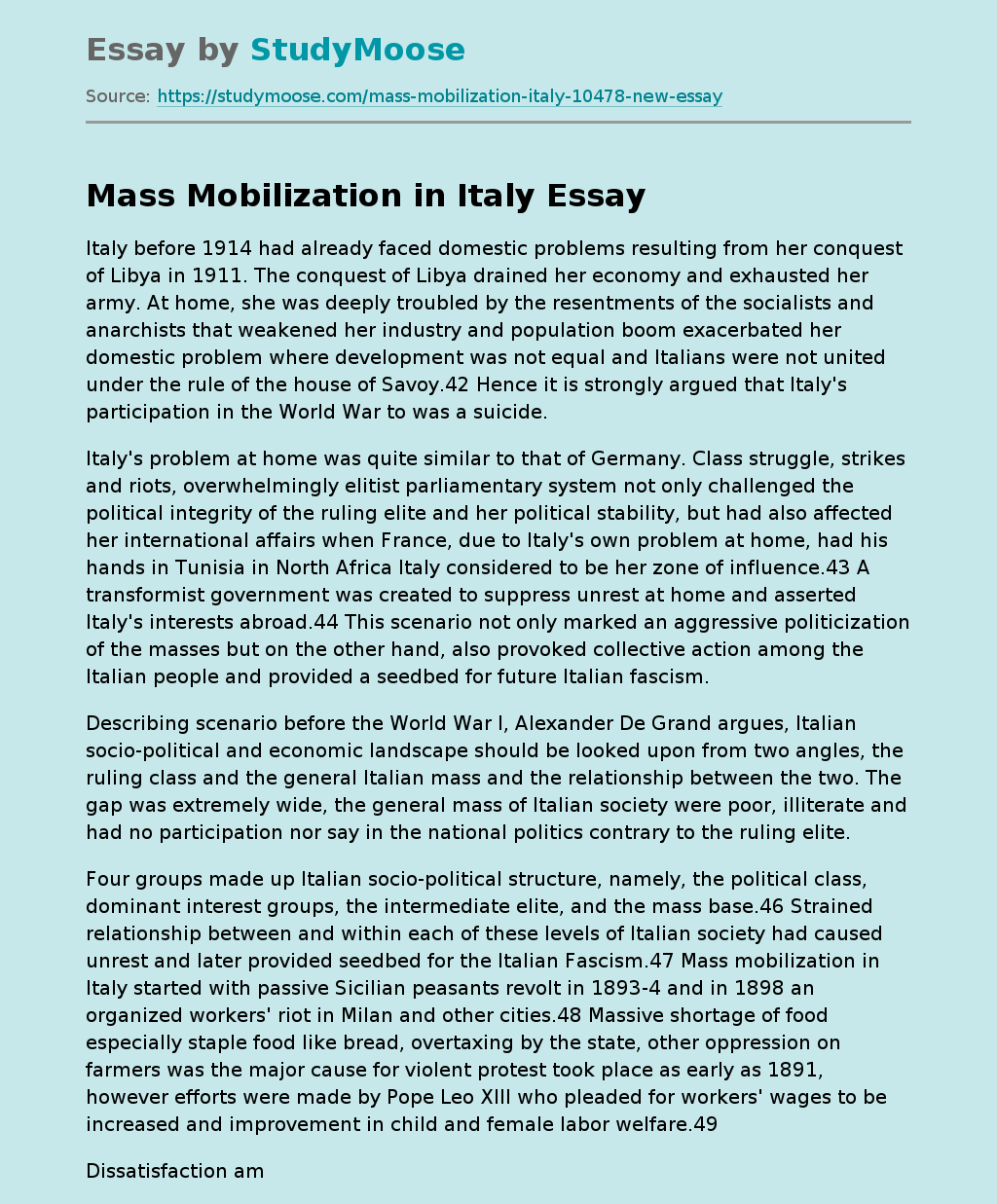