The purpose of this experiment was to identify whether density is an extensive or intensive physical property. By using water displacement, the volumes of the paper clip samples were measured and the masses were obtained by using an electronic balance. Each mass and volume was unique to their sample so by using their values, density was used to identify substances in the lab. After conducting the experiment, the results showed that there was a positive slope between the different paper clip samples’ masses and their volumes.

Don't use plagiarized sources. Get your custom essay on
“ Density Lab Write Up ”
Get custom paper
NEW! smart matching with writer

It was concluded from this pattern that density is an extensive property.

Intensive physical properties are properties that are independent of the amount of mass. (“Thermodynamic Properties” 2012) Therefore, they do not depend on the sample’s mass. One physical property that was investigated during an experiment was density.

Density is a physical property of matter that can be measured by dividing the matter’s mass by its volume. The purpose of the experiment was to answer the following question: Is density an extensive or intensive physical property? To answer this question, the densities of paper clip samples were calculated using their masses and measured volumes obtained from a water displacement technique. If the experiment showed that the sizes of the samples affected the calculated densities, then density would be an extensive property since it would be relying on the samples’ masses.

If density is an extensive property, then the masses of the different number of paper clips will affect the calculated densities because density depends on the mass of the paper clip samples.

After the experiment was conducted, the results showed that density is an extensive physical property. The differences between the masses of the samples affected the calculated densities because although the ending volumes were different, each sample started out with the same volume of water. This was because each sample had a different mass. This was what led to the conclusion that density is an extensive physical property.

The conclusion does support the hypothesis however one source of error that may have affected the experiment’s results was the durability of the paper clips. The material they were made out of may have eroded away when water displacement was used to measure the volume of the paper clip samples. This would have affected the size of the samples. An improvement that could be made to this experiment based on this error is using a different sample. Instead of paper clips, pennies could have been used because pennies are made out of copper, which is a heavier metal than the mild steel paper clips are made out of. This would’ve eliminated the problem of mass loss during the experiment. 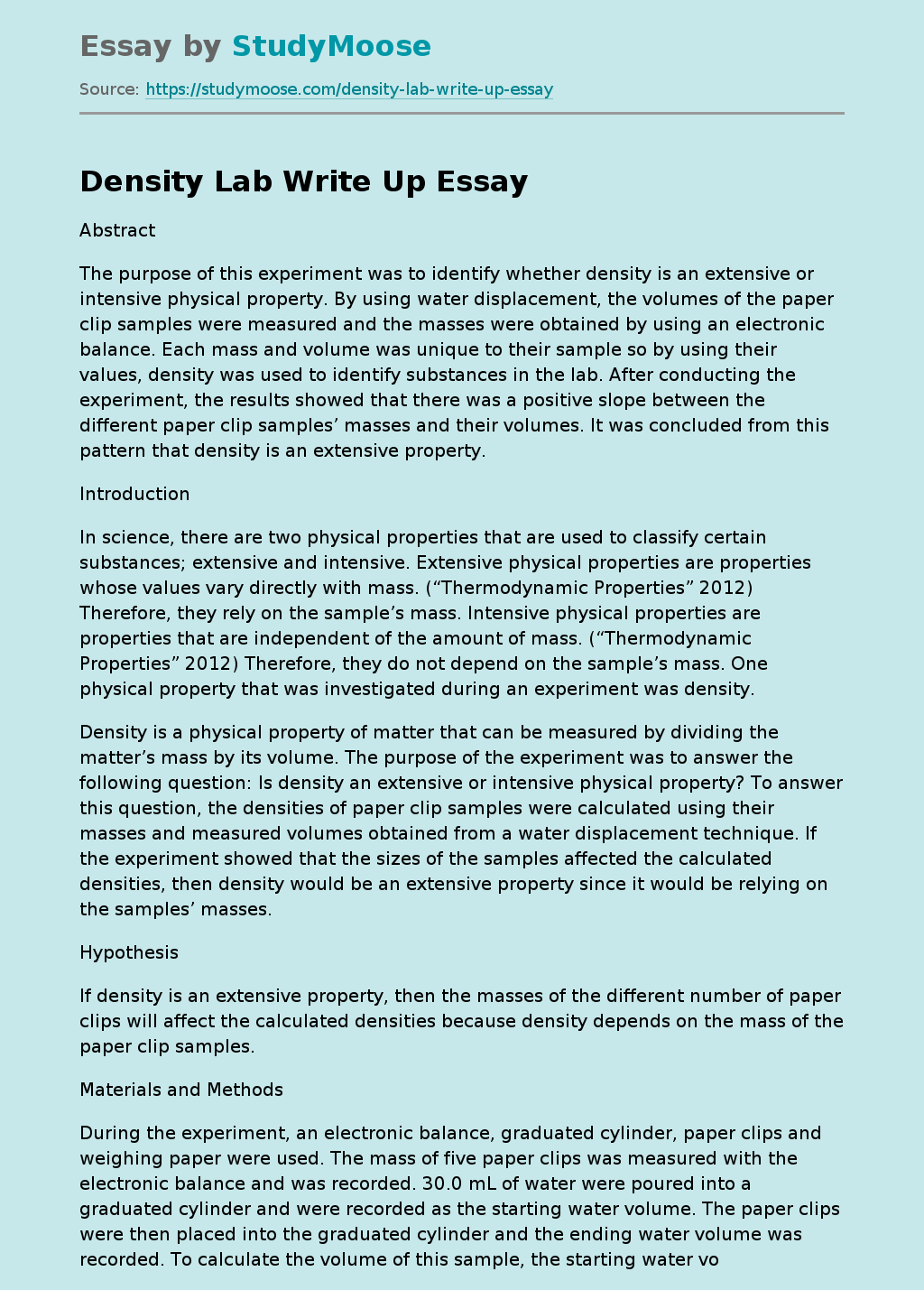