Dehydration of an Alcohol lab report

Don't use plagiarized sources.
Get Your Custom Essay on Dehydration of an Alcohol lab report Just from $13,9/Page

This is an elimination reaction. Water is eliminated from the reaction and the products formed are alkenes. The reaction follows Zaitsev’s rule because it is an elimination reaction. Zaitsev’s rule says that the double bond that is more highly substituted or more stable will be dominant in the products. In the experiment the dehydration of 2-methylcyclohexanol takes place. 2 methyl-cyclohexanol has a very poor leaving group which is the hydroxyl group (OH-).

When a strong acid such as H+ protonates the oxygen in the hydroxyl group, it becomes a good leaving group in the form of water.

The leaving group leaves as water, and a carbocation intermediate is formed because of experiment conditions. Since there is no other nucleophile present besides water, the intermediate must undergo elimination to reach stability. Each alpha carbon loses a proton and produces the alkenes 3-methylcyclohexene, and 1-methylcyclohexene. According to Zaitsev’s rule, 1-methylcyclohexane is more substituted and will therefore be the major product. In the first half of the experiment, the alkenes produced were distilled to prevent the reverse reaction from taking place, and to obtain the greatest possible yield.

In part two, Gas Chromatography was used to show the amount of major products formed. Gas Chromatography was also used to determine how much of each alkene was present in the final product, and to determine if those results correlated with the results predicted by Zaitsev’s rule. Reaction Scheme 2-methyl-cyclohexanol 3-Methylcyclohexene 1-Methylcyclohexene C7H14OC7H12C7H12 114. 1996. 1796. 17 Curly Arrow Mechanism Table of Physical Constants*. Experimental Procedure Part 1 A simple distillation apparatus was set up using a 25 mL round bottom flask.

5 mL of 2-methylcyclohexanol and 1mL of 4:1 phosphoric acid: sulfuric acid solution was added to the round bottom flask. The flask was briefly swirled to mix reagents. The flask was heated and a temperature was maintained below 100 oC. The distillation continued until approximately 3 mL of distillate was collected. Sodium sulfate was then added to a beaker and weighed. The distillate was then added to the beaker. The beaker was covered and left for a week. Part 2 A vial was obtained and weighed. The distillate was taken out of the beaker with the sodium sulfate with a pipette and placed in the new vial.

39% Results and Discussion The objective of the experiment was to carry out the dehydration of the alcohol 2-methylcyclohexanol with an acid as a catalyst. Particularly, a 4:1 mixture of sulfuric acid and phosphoric acid were used in the experiment. The products formed were to be compared to Zaitsev’s rule and analyzed using Gas Chromatography. The graph produced from the Gas Chromatography showed that a reaction occurred because there are peaks on the graph. Each peak represents a major product formed. Since there are two peaks on the graph 2 major products formed. The theoretical yield of the alkene mixture was 3.

Where would starting material, 2-methyl cyclohexanol, come out on a gas chromatogram if it was present in our product mixture relative to the methyl cyclohexene peaks? Explain. (10). 2-Methylcyclohexanol boils at 1630C. 3. Propose a curly arrow mechanism for the dehydration of cyclohexanol, catalyzed by H2SO4. How many products will form? (10) 4. A student dehydrated 4-methylcyclohexanol with sulfuric acid as outlined in the above experiment. He found that the product mixture included three alkenes, below. Explain his results. Provide a curly arrow mechanism for the formation of all three products. (20)Hint: carbocation’s can rearrange!

Dehydration of an Alcohol lab report. (2017, Feb 25). Retrieved from https://studymoose.com/dehydration-of-an-alcohol-lab-report-essay 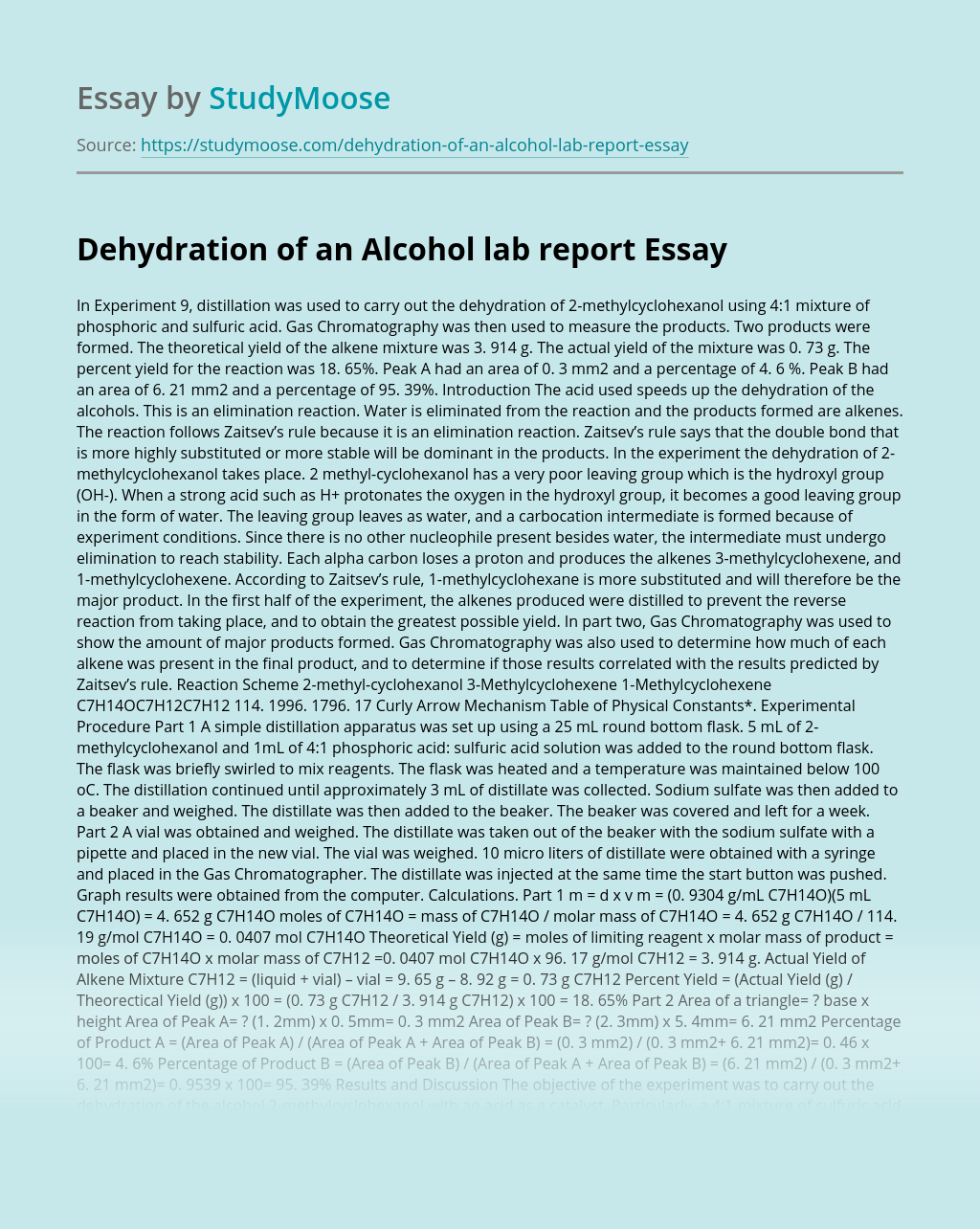 Phineas Gage is one of the earliest documented cases of severe brain injury. He is the index case of an individual who suffered major personality changes after brain trauma, which makes him a legend in the annals of neurology. Gage worked as a foreman on a crew that did railroad construction and was excavating rocks...

The African Slave Trade has affected a very large part of the world. This phenomenon has been described in many different ways, such as slave trade, forced migration and genocide. The problem with these descriptions is that none of them accurately describe the African Slave Trade or its consequences because they are all biased points...

This is a case of Blake, a young, inexperienced professional, taking on an internship with a consulting company, who assigns him to manage the Royal Hotel in New York City, a luxury hotel which catered to businesses and had a large number of repeat guests. This case emphasizes the difficulties Blake faces in helping the...

View sample
Gdp Is Not a Perfect Measure of Economic

By definition the GDP (Gross Domestic Product) is a measure of the income and expenditures of an economy. Also, it can be defined as the total market value of all final goods and services produced within a country in a given period of time. Base on GDP definition and base on many economist points of...