Childhoods suppose to be the best moment of one’s life. Usually when we recall our childhood, we see naughtiness, eagerness to learn something new, filled with questions and most of all being happy. Children love dancing whereas the writer, Gwen Raverat author of ‘A Cambridge Childhood’ used to hate them. She did not enjoy at all and she dint jus have problems with dancing, she mentions “dancing class was the worst of the social events which I dreaded as a child”.

Don't use plagiarized sources. Get your custom essay on
“ Dancing Classes in Raverat’s Book A Cambridge Childhood ”
Get custom paper
NEW! smart matching with writer

She never liked to do anything.

The passage is to simple, descriptive and narrative paragraphs. This passage is in first person narration. The first paragraph is about all that she was made to do and the other one was how she took revenge on them. The first impression that the reader gets about this passage is very obvious that according to her she’s not had a good childhood. Shows that she remembers each and every detail, like the name of the teacher she disliked.

Generally when something we don’t like happens to us it’s hard to forget. According to me the same has happened to the writer.

In line five, the writer feels embarrassed about wearing her “white frock and pink sash” which according to her was beautiful but “not one me” she said. We can see the embarrassment when she says “I felt like a fool”. She goes on about what she was forced to do. Maybe it all looked good on her like “hop”, “wave my arms about” and “stick out my legs”.

She could be blinded by her hatred about these things. The shortest sentence used in the extract is “degrading antics” which means humiliating herself on purpose. Then she goes on and uses a simile, she says “felt like a lion at a circus”. A lion is forced to do a masters bidding just for everyone’s entertainment, she felt like that too. She dint enjoy is, everyone else enjoyed watching her. The writer uses visual imagery for us to understand better how she felt.

The writer clearly hates all that happens and she’s open about it. She says “resented exceedingly”. For a child emotions are always extreme. She feel really angry and the writer has used kinesthetic imagery (it’s an imagery which corresponding to one of our senses but this can be divided into sense of touch, temp, movement and feelings) to bring that out in her. The writer wanted to gain sympathy by telling all that happened. She did not have a choice; she had to attend all the social events which she “dreaded”. This tells us about her nature, that she’s reserved and that she likes to be different from everybody.

It was really strange for her when other children, even her cousin sister liked them. She felt shameful not only for herself but also for her classmates. In second paragraph we get another close look about her nature, she’s ill-tempered. Usually people wait and let their anger build inside them but the writer acted immediately being very rude, she “kicked the heel of the child” in front of “her”. For a child words like “death and torture” onto a “poor woman” are really harsh words but she uses them also as an oxymoron. She wants the teacher to suffer like she did or even worse and still feels sorry for her.

On my first impression as a reader I felt that she’s been exaggerating about everything it’s not as bad as she portraits, especially to be using words like death and torture or being a bully. The whole extract is negative like after a long day of rehearsals, costume fitting, competition and with the suspense of the result it ends on a happy note, going “home”. 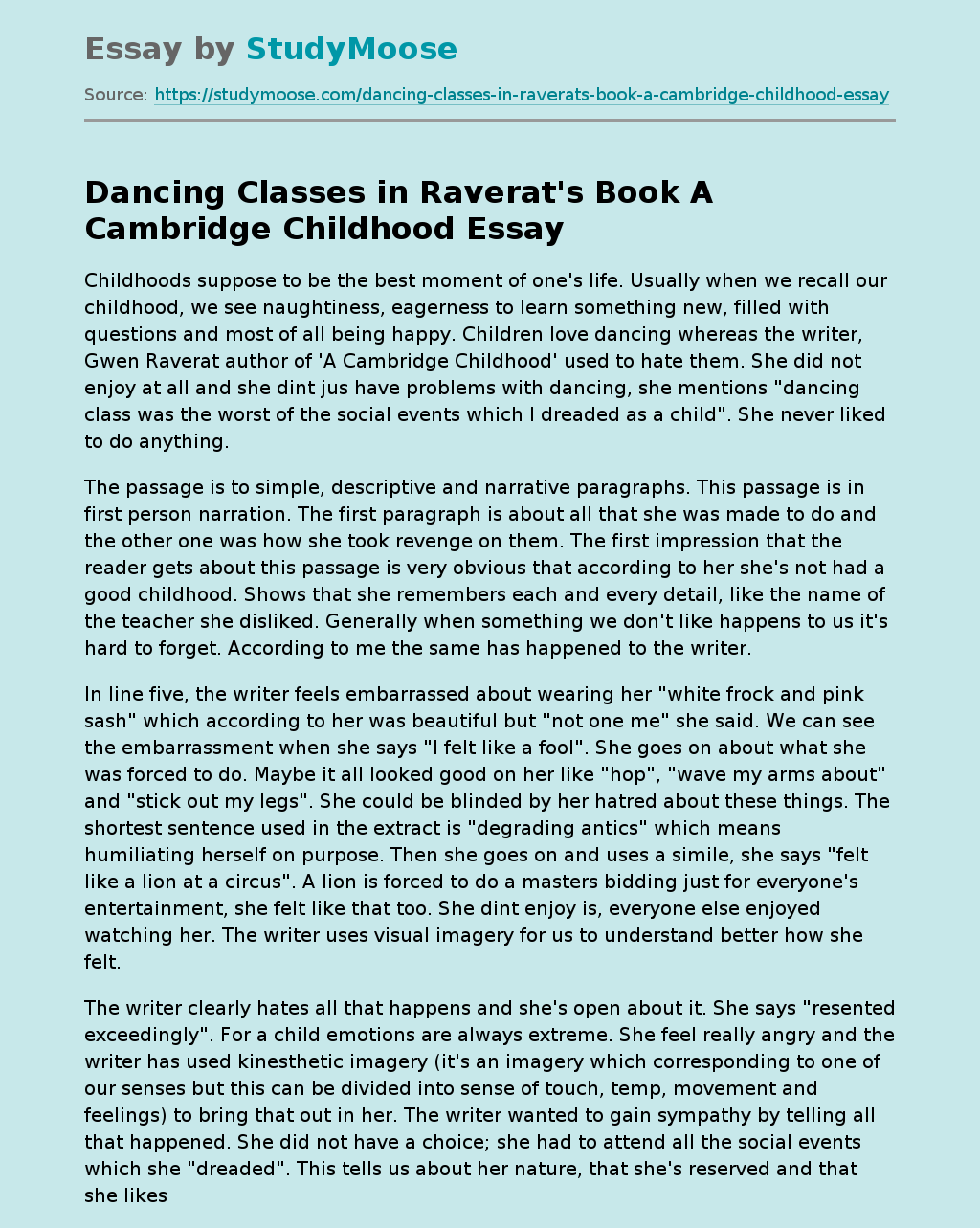