The concepts related to cultural distance and local linkages are of paramount importance to the strategies adopted by multinational companies, Tjosvold and Leung (2003) noted. These authors note that it is through placing utmost significance on the said concepts that companies would be able to ensure the success of both their international operations (those in situated in the host country) and their domestic operations (based on the home country). Luo (1999) further expounds on the topic at hand.

According to this author, it is of paramount importance that a certain company, in the hopes of expanding its global reach, to be able to look into factors that would that would affect their stability in a certain region.

Don't use plagiarized sources. Get your custom essay on
“ Cultural Distance ”
Get custom paper
NEW! smart matching with writer

Luo (1999) then discussed the need for multinational enterprises that have subsidiaries outside of their home country to scan and interpret the environment in order to make appropriate decisions regarding internal arrangements and external alignment.

They must be able to look into the similarities between the culture of the home and host countries which has been considered important in terms of ensuring the development of a tightly knit network between the two (Luo, 1999).

Aside from this, it was also maintained that it is through the careful analysis of cultural distance that multinational companies would be able to determine their competitive advantages and reduce their disadvantages that may stem out from the following: (1) their dependence on local settings, (2) their vulnerability to government interference, and (3) their bargaining power with the host government (Luo, 2002).

Hence, Luo (1999; 2002), without a doubt, attributed the importance of taking cultural distance and local linkages into consideration in order to ensure the success of multinational corporations that are conducting businesses within an international context.

Background of the Study Cultural distance and local linkages, without a doubt then, becomes of paramount importance to expanding businesses that seek to tap markets outside of their own domestic sphere.

Understanding the cultural distance existing between the multinational enterprises’ home and host countries are of paramount importance in order to ensure the success of the former and its business initiatives. In this paper, cultural distance is measured based on the model developed by Geert Hofstede which noted that the difference between two countries are more or less affected by the following factors: (1) power distance, (2) uncertainty avoidance, (3) individualism vs. collectivism, and (4) masculinity vs. femininity (Hofstede, 1991).

The difference between the countries in relation to the four factors affects the manner by which multinational companies enter into businesses outside of their home country. Brouthers and Brouthers (2001), in fact, look into how cultural distance influences the instances by which affect their modes of entry. Apparently, this is due to the fact that the survival of the business venture may depend on the management of the relationships existing between the home and host countries, thereby making it of paramount importance to the business to take the said factor into consideration (Barkema & Vermeulen, 2009; Hennart & Zeng, 2002).

Manev and Stevenson (2001), in line with this, also stated looking into cultural distance may eventually affect the relationships amongst the employees and the management situated in the home countries. The importance of Linkages, on the other hand, lies on its ability to provide business ventures with the competitive advantages needed in order to ensure the success of their businesses, Blomstrom and Kokko (2003) discussed. In general, local linkages refer to the relationships established by multinational relationships with the host country that serve as an anchor to their activities, Chen, Chen and Kyu (2004).

The essentiality of the said linkages can also be attributed to the sharing of resources and activities in order to ensure the success of the business enterprise. Hence, local linkages once again reiterate the need for business ventures to look closely into cultural distance. Previous researchers stated the fact that a culturally distant company or corporation may significantly affect the linkages it develops with the host country, thereby threatening the formation of competitive advantage necessary to the success of their businesses.

It is in line with the abovementioned discussions that this research shall focus on the manner by which cultural distance affects local linkages which could more or less pose significant implications to the formation of competitive advantages, thereby affecting the expansion of businesses. More specifically, however, this study is directed towards Dutch multinational enterprises. Statement of the Problem

Cultural distance, as previously mentioned, can be measured by looking into the four factors that are contained within the model of Hofstede; namely: (1) power distance, (2) uncertainty avoidance, (3) individualism vs. collectivism, and (4) individualism vs. collectivism. In general, the difference between the home and host countries of a certain multinational enterprise tend to affect several aspects of their businesses, including their modes of entry, the manner by which human resources are managed, the development of networks, and most importantly, the relationship existing between the two.

Aside from this, the discussions made in the foregoing paragraphs also noted of cultural distance as an important factor that affects the development of local linkages between the multinational enterprise and the host country, which is then important in terms of ensuring their competitive advantage and success in their expansion to a location outside of their traditional place of origin.

It is for this reason that this research is devoted to the provision of answers with regard to the main research question: how does cultural distance affect the formation of local linkages, taking into consideration the experiences of Dutch multinational enterprises? To support this, the following research questions are also deemed necessary:

1. How does cultural distance significantly affect the development of local linkages?

2. How does cultural distance significantly affect the favorability of factors relating to the local business environment, based on the experience of Dutch multinational enterprises?

3. In what way does cultural distance affect decisions with regard to modes of entry and autonomy of the subsidiaries of Dutch multinational enterprises?

4. To what extent does cultural distance affect the formation of competitive advantages of the Dutch business ventures in host countries?

5. What are the common benefits obtained by the Dutch multinational enterprises with regard to their ability to form successful local linkages?

6. What are the common disadvantages experienced by the business enterprises in relation to their inability to establish successful local linkages? Hypotheses

It is in line with the abovementioned research questions and problem statement that the researcher develops the following hypotheses that this study shall either accept or reject, based on the results obtained by the latter: Main Null Hypothesis: Cultural distance does not affect the Dutch multinational enterprises’ establishment of local linkages.

Null Hypothesis 1: Cultural distance and the establishment of local linkages are not significantly correlated with each other.

Alternative Hypothesis 1: Cultural distance and the establishment of local linkages are significantly correlated with each other 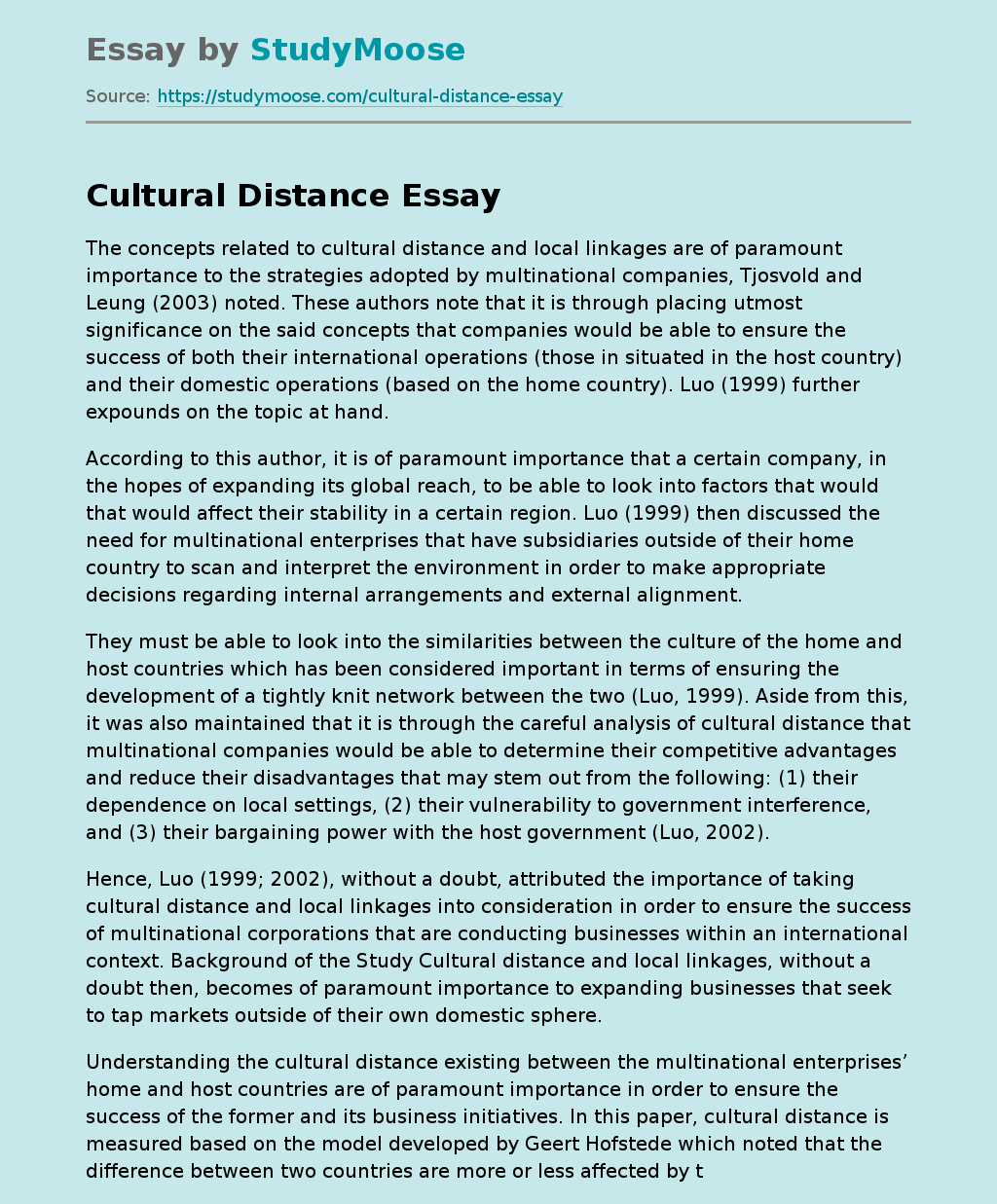