There are several health conditions that adults suffer from and one of those health issues is lung cancer. Lung cancer in adults is seen as one of the prevalent conditions that needs to be fully addressed so that the rate of deaths that occur as a result of the condition. There is lots of evidence which indicate that the numbers of adults that are suffering from lung cancer have increased. It is to be noted that the adults that suffer from lung cancer require a lot of attention so that they can be able to recover and get better (Wood, Molassiotis, & Payne, 2011).

Don't use plagiarized sources.
Get Your Custom Essay on Critique of Systematic Research Review SRR Just from $13,9/Page

This is based on the reason that lung cancer is a chronic illness that takes a long time before they can recover although if proper care is not given then there are chances that they may end up dead. The rate of death from lung cancer increases as a result of the lack of proper care for the patients.

From this systematic review of the research that was conducted, it is to be noted that there are several symptoms that can be used to identify an adult that suffers from lung cancer. Some of the major symptoms as observed through the systematic review include cough, whereby the adults often develop new coughs and to a great extent the cough often becomes chronic and does not end even with continued medication(Wood, Molassiotis, & Payne, 2011). The other symptom that has been identified is that the patients suffer from shortness in breath and find a lot of difficulty in breathing. The systematic review have also identified wheezing as well as whistling sound production when breathing as some of the other symptoms which are associated with lung cancer among the adults. Furthermore, it is the finding of the systematic review that lung cancer patients also suffer chest pains which often may range from those that are sharp pains, dull or even stabbing pains on the chest as an indication of lung cancer(Wood, Molassiotis, & Payne, 2011). Finally, hoarseness of the voice as well as the face swelling, neck, arms or even having lots of headaches have been identified as some of the symptoms through this particular systematic review.

From the various symptoms which have been identified above in this systematic review, it can be noted that there is great importance in the management of the symptoms among the patients that suffer from lung cancer. The systematic review indicates that it is important to understand the way the research on the symptoms of lung cancer have been conducted so that future research can be based on these findings as indicated in the systematic review(Wood, Molassiotis, & Payne, 2011). It is important to note that lung cancer is one of the major conditions that many nations are grappling with especially among the adults. The rate of deaths have driven researchers to find ways through which they can identified the suitable ways of managing and reducing the rate of deaths as a result of lung cancer.

The systematic review provided on the symptoms of lung cancer among adults is quite extensive in its approach and has provided enough detail in addition to allowing for further research to be conducted on the same topic. From the systematic review, it is noted that there have been a lot of strides which have been made towards understanding the various symptoms that relate to lung cancer in adults. The systematic review is quite detailed in its analysis of the symptoms which are related to lung cancer among the adults(Wood, Molassiotis, & Payne, 2011). The review can be said to be sufficient as it touches on various theoretical, methodological as well as conceptual issues which need to be addressed through future research on the topic. The review however limits its information in terms of the theoretical framework that has been used in the identification of the symptoms which are related to the lung cancer condition. This lack of theoretical framework in the study means that there is need for more research on the topic to be able to identify the various theoretical issues which are part of the research in identifying the symptoms(Wood, Molassiotis, & Payne, 2011). The strength of this particular systematic review is that the presentation of the information and data has been done in such a way that it is easy to follow from the beginning to the end. Each step of the review is clearly identified which makes it easy for a reader to read through the work. Furthermore, the presentation of data and information has also been accompanied with graphics in terms of tables and charts which helps in understanding the information on the symptoms of lung cancer among adults.

The systematic review also requires the use of tools and equipment in terms of data collections that are reliable and can provide valid data and information which can be used in the identification of the various symptoms that are also associated with lung cancer. It is to be noted that the systematic review however, despite not showing the use of theoretical frameworks that can be used to establish the symptoms of lung cancer, it identifies some of the ways through which patients that suffer from lung cancer can be assisted(Wood, Molassiotis, & Payne, 2011). One of the recommendations that has been suggested by the systematic review is that there is great need for the health care providers to ensure that they practice what is known as symptoms management It is also the recommendation of this systematic review that gender issues should be incorporated in to future research to find out if there is any significance of gender in terms of symptoms of lung cancer in males and females(Wood, Molassiotis, & Payne, 2011). 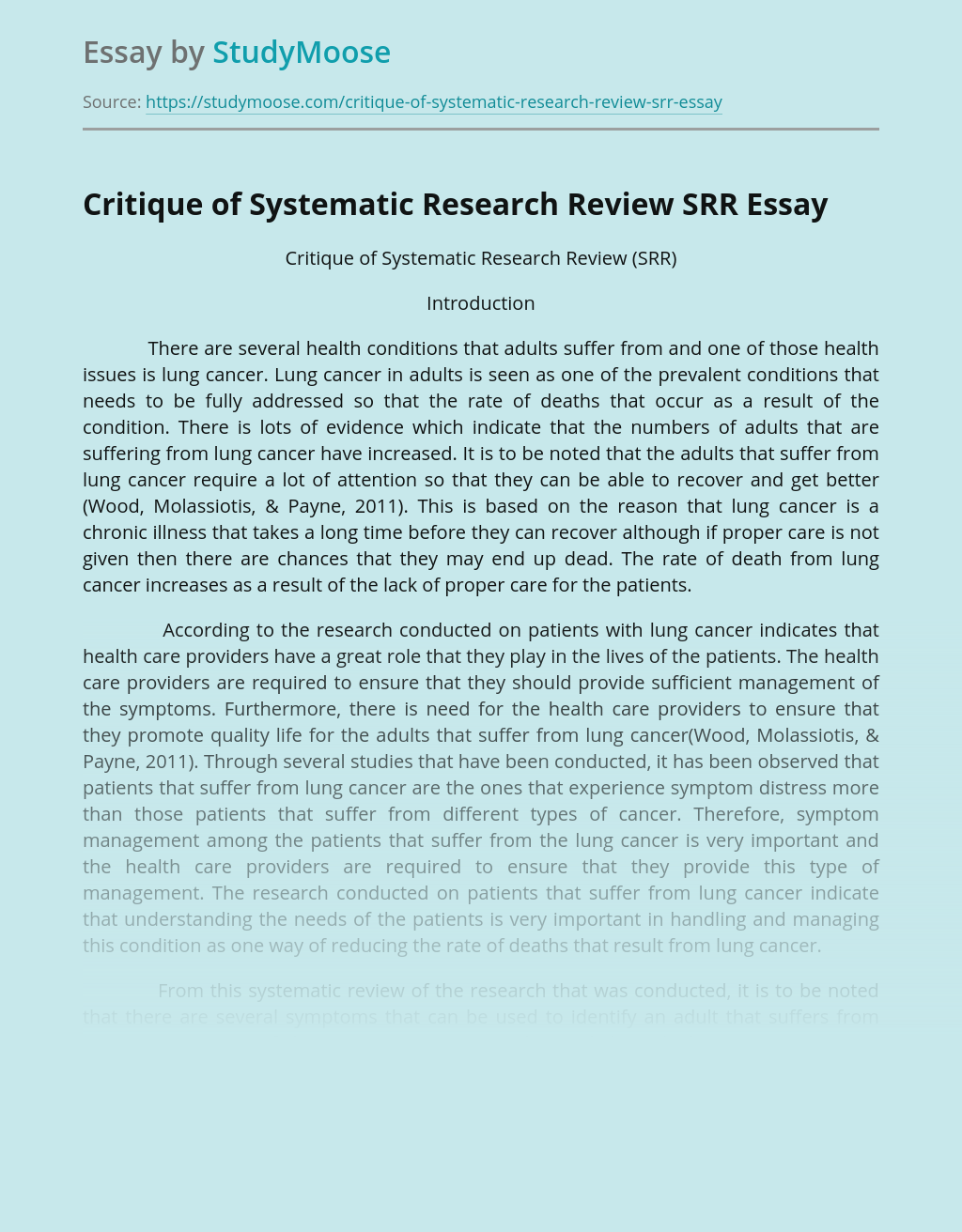 A Clean And Healthy Environment

A clean and healthy environment is part and parcel of the wealth and quality of life that we desire for ourselves now and for our children in the future. People demand that the air they breathe, the water they drink, and the food they eat is free of pollution and contaminants; they want to live...

1. How can you evaluate your own knowledge, performance and understanding against relevant standards? So, how do you ensure you are working within up to date standards for health and social care? How do you check this? This is where you improve your performance with training and supervisions and I can check with the CQC...

Weight problems amongst American youths has actually ended up being a national epidemic. Both developed and establishing nations face a crisis of rising trends of obesity and obese amongst adolescent youths (Centers for Disease Control and Avoidance, 2004). Around 10 % of school children are overweight with United States alone reporting 25 % of obese...