“Certainly Conrad appears to go to considerable pains to set up layers of insulation between himself and the moral universe of his history. He has, for example, a narrator behind a narrator. The primary narrator is Marlow but his account is given to us through the filter of a second, shadowy person. But if Conrad’s intention is to draw a cordon sanitaire between himself and the moral and psychological malaise of his narrator his care seems to me totally wasted because he neglects to hint however subtly or tentatively at an alternative frame of reference by which we may judge the actions and opinions of his characters.

Don't use plagiarized sources. Get your custom essay on
“ Critique of Joseph Conrad’s Book Heart Of Darkness ”
Get custom paper
NEW! smart matching with writer

” Although Achebe recognizes Conrad’s use of multiple narrators, he dismisses any intention on Conrad’s part of utilizing the narrators to introduce psychological depth in Heart of Darkness. I believe, however, that Conrad’s full objective was to establish a moral and existential tone in his novella; he accomplished this by incorporating a second narrator.

Conrad introduces the narrator and his surrounding characters as they navigate the Thames River. As the narrator describes Marlow and the other Seamen the reader begins to question where Marlow stands in this social hierarchy. Conrad thus establishes a tone of uncertainty in the credibility and morality of both Marlow and the narrator. The entire novella is a retelling of Marlow’s tales in Africa, years after they had occurred, which leaves the extent of Marlow’s exaggeration and embellishment of his story up for question.

“Joseph Conrad was a thoroughgoing racist. That this simple truth is glossed over in criticisms of his work is due to the fact that white racism against Africa is such a normal way of thinking that its manifestations go completely unremarked”

Achebe is not reading Conrad’s work on a symbolic level rather he superficially judges parts of the novella as racist. The novella Heart of Darkness is not a racial slur, nor is it an insulting depiction of the people of Africa in any way. It is an examination of the false pretenses the Europeans held over their assumed benevolent work in Africa. The purpose of Marlow’s story was to show the adverse effects of imperialism on white European tradesmen. Conrad is thus in no way a racist, as he set out to depict the malice of Europeans during this time period. He uses his experiences in the Congo during King Leopold of Belgium’s tyranny to show the malevolence greed instills in mankind.

“Africa as a metaphysical battlefield devoid of all recognizable humanity, into which the wandering European enters at his peril. . . . . Can nobody see the preposterous and perverse arrogance in thus reducing Africa to the role of props for the break-up of one petty European mind? But that is not even the point. The real question is the dehumanization of Africa and Africans which this age-long attitude has fostered and continues to foster in the world. And the question is whether a novel which celebrates this dehumanization, which depersonalizes a portion of the human race, can be called a great work of art.”

Conrad’s Heart of Darkness is a great work of art; is it a symbolic delineation of Western covetousness and the effects materialism has on mankind. Africa is not meant to be “devoid of all recognizable humanity.” Africa is a setting which could be moved anywhere white Europeans use phony moral objectives to carry out their greed. The novella is not specific to Africa but, is a representation of the degradation of man when he works on fake moral grounds. It is for that very reason that Conrad begins his novella with Marlow’s recount of man’s historical occupations -including Roman and British sieges- and the darkness that follows all acts of greed.

Unfortunately his heart of darkness plagues us still. Which is why an offensive and deplorable book can be described by a serious scholar as “among the half dozen greatest short novels in the English language.” Although Achebe’s defensive view is reasonable as he is of African descent and feels affronted by the opinion he believes Conrad holds, he misses the overall meaning of the novella. Conrad’s Heart of Darkness is not a plague, nor should it be regretted. This novella gave insight into the shameful acts committed by Europeans in search of fame and fortune. Heart of Darkness is not a slander on the African people; it is the exposure of European cruelty and man’s madness derived from greed and feeling empowered over another.

“As a sensible man I will not accept just any traveler’s tales solely on the grounds that I have not made the journey myself. I will not trust the evidence even off man’s very eyes when I suspect them to be as jaundiced as Conrad’s. And we also happen to know that Conrad was, in the words of his biographer, Bernard C. Meyer, “notoriously inaccurate in the rendering of his own history.” In fiction it is often the author’s idiosyncratic perspective that makes a story intriguing. Factual recounting does not arrive in a fictional book. Whether Conrad’s portrayal of imperialism in Africa was entirely accurate or an embellished version of his own existential struggles, Heart of Darkness was a landmark piece for his time period. The atrocities committed during European imperialism were not a subject of conversation but, Conrad helped to bring the issues to the surface. Conrad did not aim to offend the people of Africa; he intended to expose the Europeans of their veiled immorality. 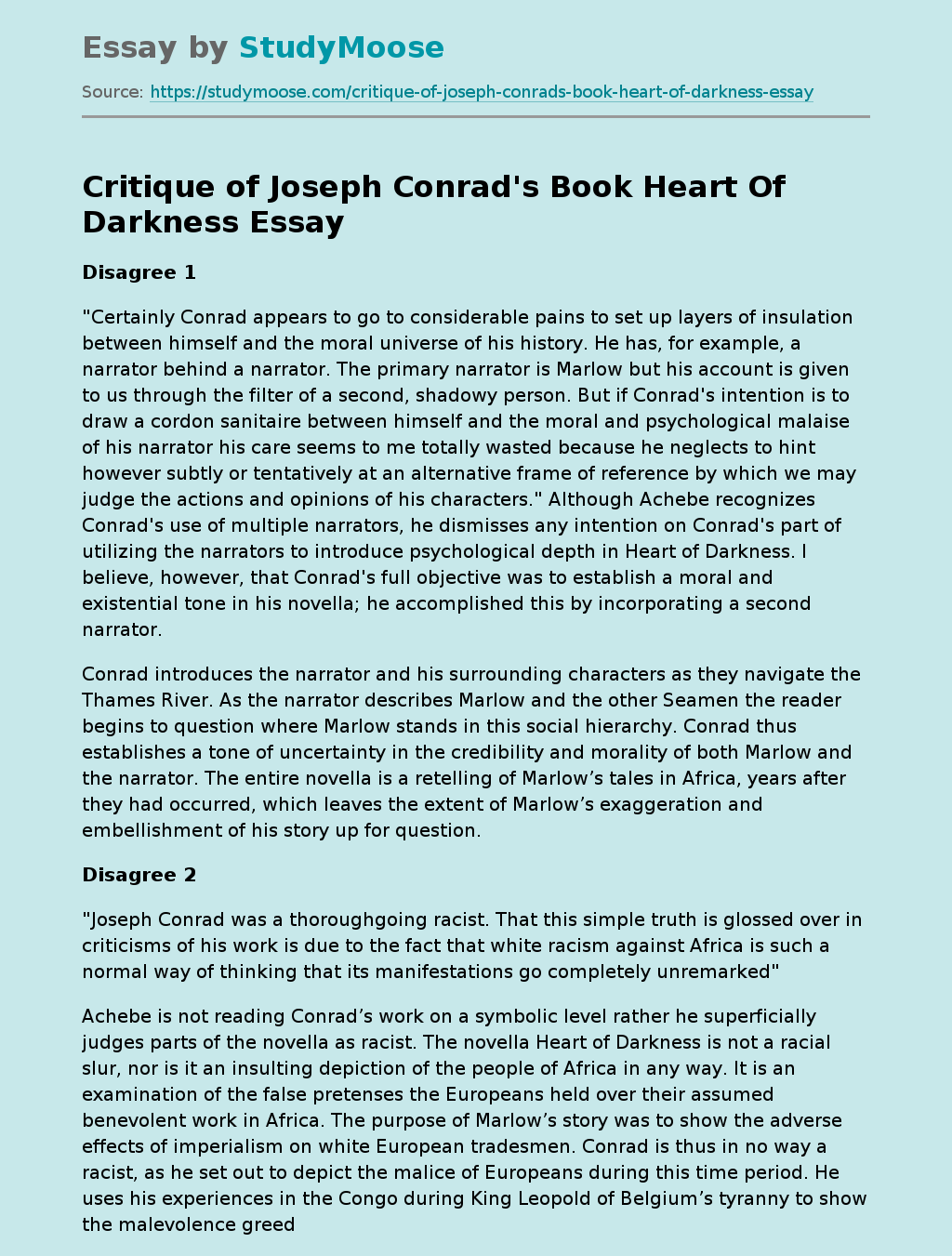