Critical Response to "The Crucible" by Arthur Miller

From its ominous opening, to its dad ending, “The Crucible” by Arthur Miller is a play driven by fear and desire, mirroring the McCarthy trials of the Communist hating 1950s. Though its set in 1692, the tone of the play and the themes of intolerance, hysteria, and ruined reputation were very prominently felt during 1953, when the play was published. The title, and the actual item of a crucible, suggests something seemingly solid melting away under immense stress. The hard structure of society in puritanical America and the spotless reputations of many good folk melt away to nothing in the fire of fear and trials caused by accusations of witchcraft.

Don't use plagiarized sources. Get your custom essay on
“ Critical Response to “The Crucible” by Arthur Miller ”
Get custom paper
NEW! smart matching with writer

Miller uses the imagery of the crucible in the play also, in a quote from Mr. Danforth, We burn a hot fire here, it melts down all concealment, though what ends up being revealed is the fear and intolerance that control their society.

The protagonist, John Proctor, has before the opening if the play had and ended an affair with the Antagonist, Abigail Williams.

In this telling of the beginning of the witch trials, it is Abigails desire for revenge that leads the girls into the woods to perform a magic spell against Johns wife Elizabeth. It is dialogue between Abigail and John, and later dialogue of the confession of some of the girls, which reveals the affair between them and Abigails deep desire to have John back at any cost. John is attempting to right his wrong in the affair between himself and Abigail, but spurning her only causes more tension.

When Abigail cannot easily win john back, and faces punishment for her actions in the woods, she turns the towns fear of witchcraft and the girls hysteria into her own device for revenge, at any cost. The playwright reveals the depth of his characters; Abigails ruthlessness, Johns remorse, and Elizabeths faith, through dialogue. Parentheticals within the text reveal tone and motivation behind simple words said, from emotion words such as enraged to the simple act of a character folding their hands or sitting. Miller has worked in these small gestures and nuances in his lines, giving each character a subtext.

The characters change as the plot progresses, Abigail goes from dismissing the girls hysteria to using it for her own ends to nearly buying into it herself, beating and hurting herself convinced that what she is doing will win John back and save them both. We see Abigails maniacal conviction in her own motivations in the scene between her and John alone in the forest. Abigail is convinced John still wants her and will do anything, even accuse him of witchcraft in the end, to have John for herself and no one else. The conflict between Abigail and John mirrors the larger conflict of the play between the real truth and the truth society in its fear wants to believe. Abigail greed and covetousness is that of their society, and Johns struggle to do the right thing is the plight of the honest man within that society, caught by the tide of accusation.

Each new action within the play such as the initial accusation, the meetings of Abigail and John, and the confession of Mary Warren drive the characters in different ways, and their reactions to those actions create a domino effect that further drives the plot and action of the play. THE CRUCIBLE does not have a happy conclusion, Abigail run away from the horror she has caused and John, along with many other honest people, dies at the hands of the supposed saviors of their society. But a play such as this, and the lesson it teaches, does not need a happy ending. In his play, Arthur Miller has held up a dark mirror to the society of that time and his own, showing how fear and intolerance can kill innocent people, and people who tout right and just motivations can be the real vehicles of destruction that they seek to stamp out.

Critical Response to "The Crucible" by Arthur Miller. (2016, Jul 05). Retrieved from http://studymoose.com/critical-response-to-the-crucible-by-arthur-miller-essay 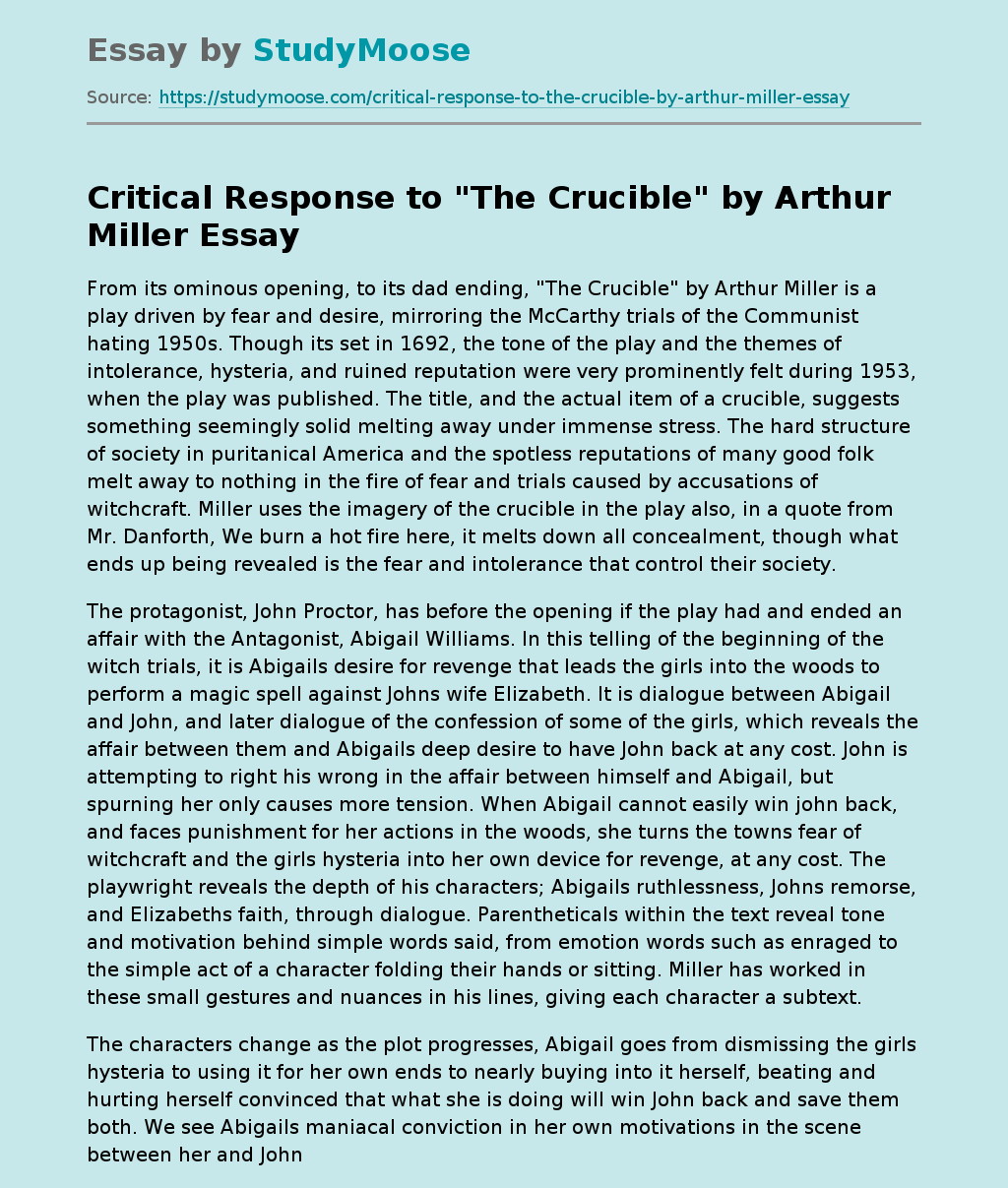