At approximately 1300 on January 31, 2012, there was a call and officers were dispatched to 125 Redbird Lane to investigate a home invasion. Upon arriving on the scene I was met by SGT Johansson to describe the scene as he saw it and the homeowners’ statements. He explained the homeowner, Cindy Pinsk told him she looked out her living room window and saw a gray sedan pull up. She heard the doorbell ring. Since she was not expecting anyone, she did not answer the door.

Don't use plagiarized sources.
Get Your Custom Essay on Crime Scene Scenario Just from $13,9/Page

She heard glass breaking and ran out the back door to a neighbor’s house, where she called 9-1-1.

She saw broken glass on the carpet in the entry hallway and saw where the door had been pried open with some sort of tool. Pinsk told Johansson her Apple computer, a pair of diamond earrings, a sapphire ring, and three credit cards are missing. He talked to a neighbor, Steve Moyer, who told him he saw a steel gray Dodge Charger in front of Pinsk’s house.

A handicap tag was hanging from the rear-view mirror. The driver was a black man with a green knit cap. The passenger was a large white man about 20 – 25 years old.

He has a chinstrap beard and was wearing dark clothes. After listening to the first on call officers’ report, I looked around the front yard to see if any evidence was dropped during or after the home invasion. At first inspection of the front yard, you could see what appeared to be footprints in the mud due to the rain the previous night. Pictures with measuring markers were taken to show the position of the questioned impression, and castings (using Class I dental stone) were taken of the shoe impression to later compare to the suspects.

Next I went into the house to look around and upon first entering the domain you could see where it appears that a tool of some kind had been used to pry open the door. Pictures with measuring markers were taken to show the position of the tool mark and for comparison. Liquid silicone was utilized to make an impression of the tools used on the door. During taking the impressions, I could see the smallest bit of blue fiber hanging from a piece of wood on the door frame.

I removed the fiber tapping the sticky side of a post-it to the fiber. I then folded the post-it, labeled it and placed in an manila envelop for evidence. Walking a little further into the domain, you could see what caused the sound of glass breaking, a vase that appeared to be knocked over during the home invasion. The living room was in disarray with couch cushions taken out of the couch, papers on the floor and drawers pulled out of desk. On the desk was a smudge of a latent partial print that I retrieved sing black powder and sticky tape. As the victim stated in her report to the officers, I went up to the bedroom to discover the missing jewelry from the jewelry box. Once again latent fingerprints were found on the desk where the Apple computer and jewelry were taken, so again prints were taken off the desk with black powder and placed on sticky tape for evidence. After thorough investigation of the house, I exited the domain to head back to the lab.

The first test that was done upon reporting back to the lab was an AFIS search for whose fingerprints were at the scene. When ran through AFIS, there was a match to a white male subject matching the description from the neighbors’ statement, John Kratz. John Kratz was brought in wearing a blue hooded sweat shirt, matching the color of the fiber found at the scene, and muddy jeans. Fibers were taken from his sweat shirt for later comparison to the fiber from the Pinsk’s’ house.

When questioned on his whereabouts that afternoon. He exclaimed that he was at McDonald’s on his lunch break. Due to his inability to produce a witness to corroborate his story, he was held for further questioning. Next, tool marking were carefully examined and based on the initial examination of the pictures (the size and shape of the impressions) molds and striation marks compared with a comparison microscope determined that the tool that was used in the home invasion was that of a screwdriver.

Fibers were then removed from the post-it using rubber tweezers and placed on a comparison microscope for a microscopic comparison for color and diameter to the fiber from the scene and that of John Kratz. Examination found the fiber to be cotton, a natural fiber and matching the fiber to John Kratz. When questioned again on his whereabouts that afternoon, with the help of the evidence that was already found, he finally broke and explained what happened and who was involved.

Rick “Rukus” Thompson was allegedly with John Kratz was brought in for questioning. During the questioning Rick denied ever being at the Pinsk’s house saying he was at home sick. Along with John, Rick also had no one to corroborate his story. Shoe impressions were taken from both suspects and compared to those found at the scene. The shoe impression was that of Rick. With all evidence putting both at the Pinsk’s house, John Kratz and Rick “Rukus” Thompson both were charged. 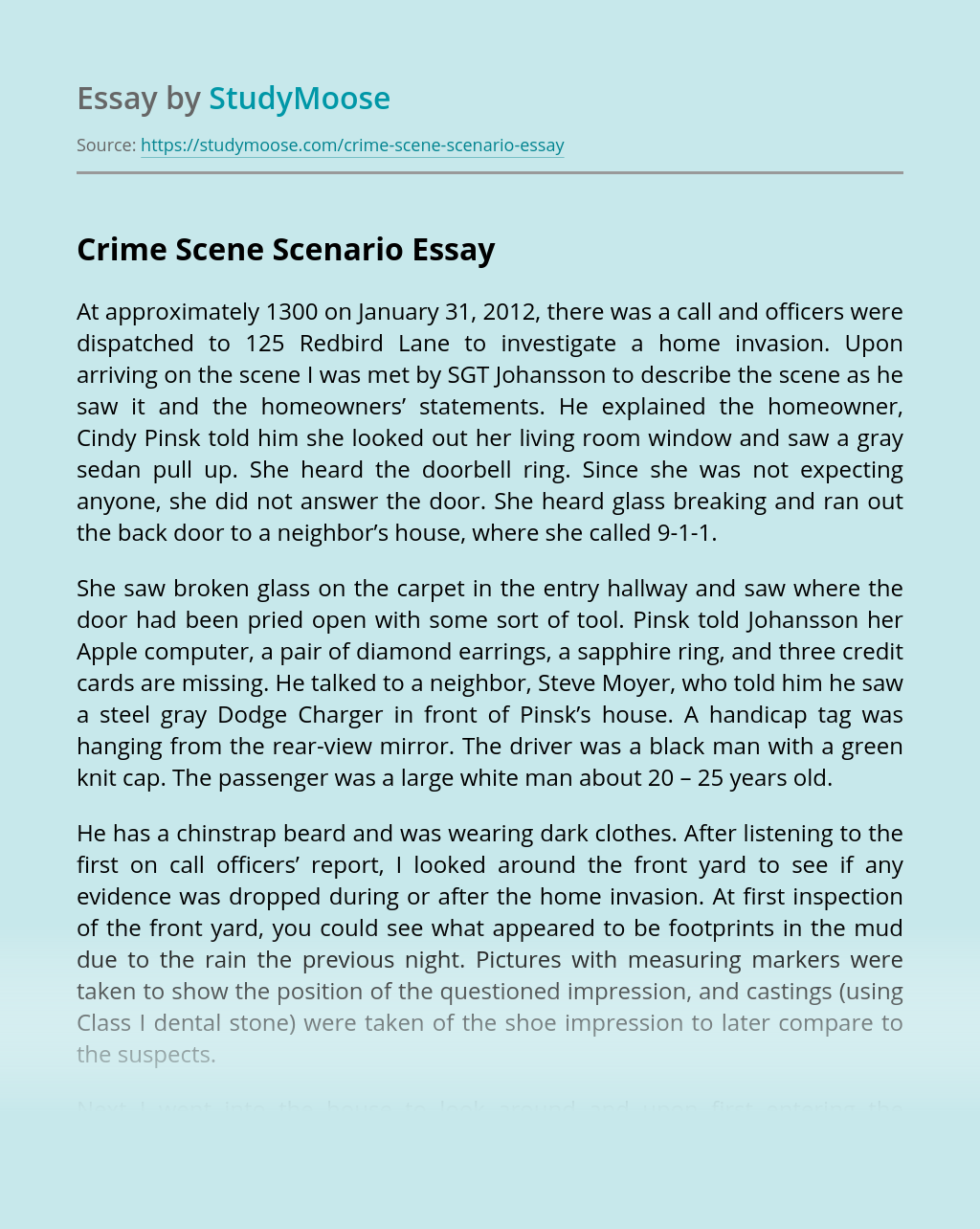