This lab demonstrates the effect of creep on lead. Three similar lead specimens were subjected to different applied loads and the effects of the load where measured by data logging software on a computer. The purpose of the lab was to explore the topic of creep, as creep is an important design factor in engineering.

Creep is the changes in shape weather gradual or constant that occurs when a specimen is under a constant applied load or applied stress, combined with temperatures that normally are or exceed one third of the melting point of the material.

Don't use plagiarized sources. Get your custom essay on
“ Creep Lab Report ”
Get custom paper
NEW! smart matching with writer

The stresses involved in creep are stresses below the yield strength and normally applied for long periods of time before a high level of creep occurs.

e. the closer to the melting point the faster creep takes place. It is diffusion within the material that causes dislocations and the movement of atoms, causing the length of a specimen to increase in gauge length while under a constant applied load.

In this lab lead will be used as not many other materials have Tm/3 (melting point temperature) at room temperature, which will remove the need to heat the specimen to the necessary temperature.

The tests will consist of taking lead specimens and applying a constant load by means of hanging weights. The total weight applied to each specimen will be less than the failure strength of the material. The specimen will then gradually increase in length until its cross sectional area will not be sufficient to support the applied load and fracture will occur.

There are three stages that a material will go through under stress. The primary Stage is where an instant strain is observed when a stress is applied, though a decrease in rate of creep takes place due to work hardening.

Secondary Stage is the most important stage as creep is at a constant rate now. There is a balance between work hardening and softening due to annealing.

In the Tertiary Stage there is the appearance of damage. Voids and cracks begin to form and eventually lead to failure.

The actual strain of the lead specimen can be calculated using the below formula:

Where ? is the strain

The steady state creep of the specimen is the strain rate during the secondary stage and can be linked to the applied stress (?).

And since the equation of a line is

1. Place test specimen 1 in a fixed position on the machine.

3. The weight is slowly applied until reaching desired weight stated above to avoid an initial impulse causing accelerated damage.

4. Ideally the specimen fractures but after a set time if fracture does not occur test is stopped

5. The data is measured by the data logger and saved to a file

6. Above process is repeated for specimens 2 & 3

In these test tecquipment machine was used picture in figure 1 below. A tecquipment machine uses a lever with an 8:1 mechanical advantage. The strain on the specimen is measured continuously with an LVDT transducer in contact with the lever. The LVDT signal is passed via an A/D card to the computer, where a data logging programme displays the data by plotting it on screen as displacement versus time.

The above graph shows how the strain increases in the primary stage it then slows in the secondary stage and was linear from roughly 200 seconds until the specimen was unloaded. The specimen did not fail however it was estimated that failure would have occurred after 4-5 hours.

A U shape graph was what one would expect from a creep test, though as failure did not occur the specimen did not reach the tertiary stage so the final slope is not on the graph.

A U shape graph was what one would expect from a creep test, though as failure did not occur the specimen did not reach the tertiary stage so the final slope is not on the graph.

This graph is more like what one would expect to see. It shows all three slopes for each of the three stages. The first as it’s subjected to the applied force. Whilst in the secondary remains linear with low strain rate before the cross sectional area finally reaches a level where it cannot cope with the applied stress and the specimen begins to fail.

In order to find these values we plot a graph of log ss against the log?. Where ? is the applied load (Mass x gravity x 8)/cross sectional area.

Using the method and formula described in the theory section we solve for A and n.

Less than 1% per year

A total time to failure of more than 10 years

From graph 3 failure occurs at a strain of 6.2

1. There are a large number of errors that can occur in this experiment

2. Measuring the dimensions of the sample particularly the gauge length, would be very easy to measure incorrectly therefore careful care is needed to ensure taking and recording of accurate measurements

3. Handling of the specimens even the heat from the human body can have an effect on the temperature of the lead which affects creep also the room temperature conditions while tests are underway i.e. someone opening a window.

5. The specimen stretching in a different plane

6. Electrical noise from humans or other machinery could alter the graph on the computer while it is recording data

In real testing tests are performed for shorter periods with higher stresses than a specimen will be subjected to in its lifespan. I.e. 10 weeks at higher stress to test a 10 year lifespan.

In concrete creep prevents cracks, which shows there are also benefits to creep as well.

Dislocation Creep was the only type that occurred in this lab as the temperature was not high enough to allow for the other types of creep.

The specimen may have had imperfections that tampered with results

This lab demonstrates the effects of creep. Creep must be accounted and compensated for in the design process. An incorrect design regarding creep can be catastrophic. Eg jet turbine blades eventually creeping and damaging the housing and entire engine. 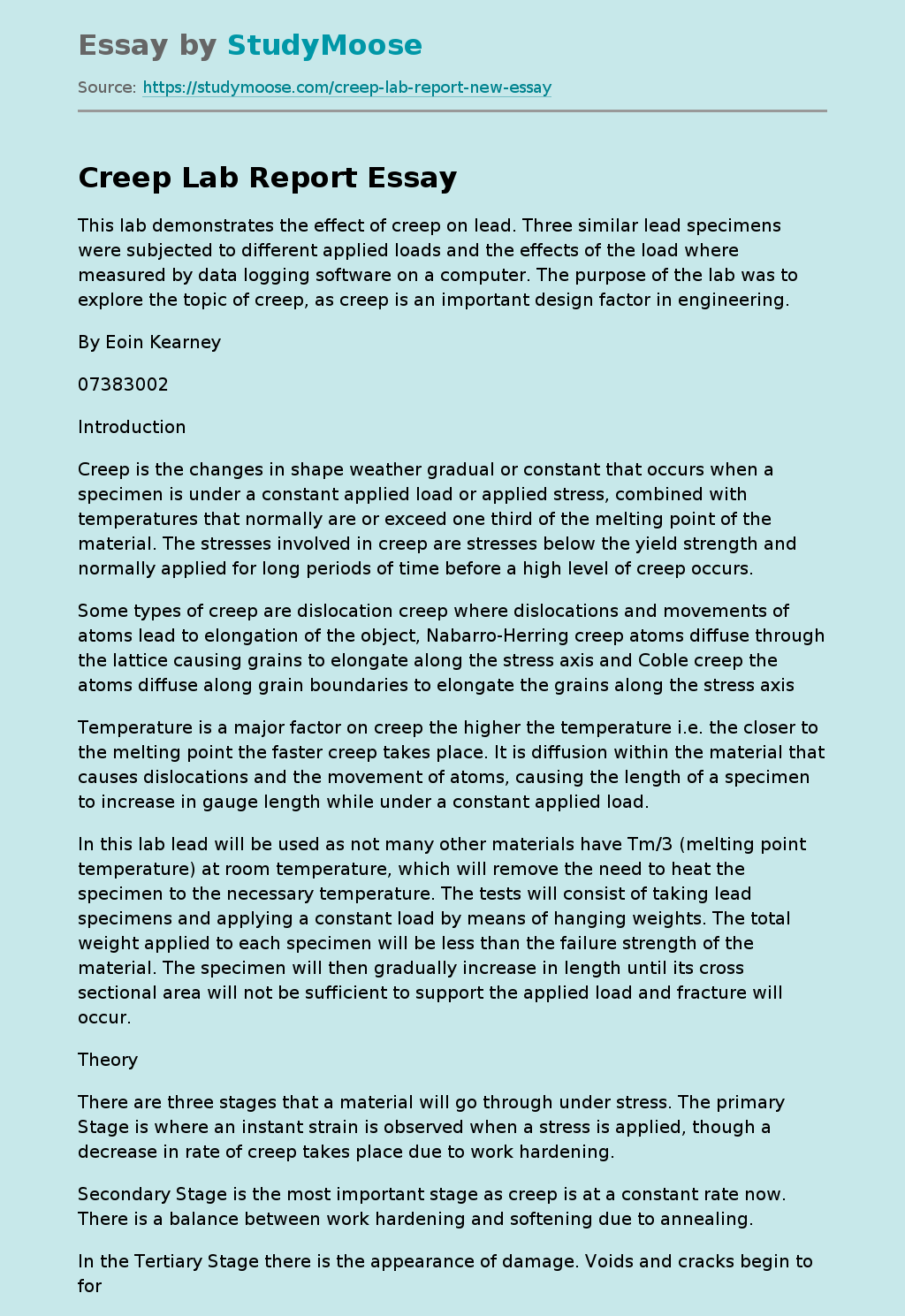