Officer Tommy Hansen, a Los Angeles police officer who, after observing his partner Officer John Ryan pull over Cameron Thayer and Christine Thayer and sexually molests Christine, requests a change of partner. He ultimately reveals his own insecurities with other races through his treatment of Peter Waters. We later see Tommy walking away from his burning car wearing a pair of latex gloves, thus concealing his involvement in the shooting.

Officer John Ryan, a prejudiced white police officer who molests Cameron’s wife, Christine, under the pretense of searching for a weapon.

Get a verified writer to help you with Crash Character Analysis

Ryan is trying to get help for his father, who has been misdiagnosed with a bladder infection. His anger manifests in prejudice, which stems from the destructive impact that local affirmative action policies had on his father’s business. He later saves Christine from a burning car when he had the perfect opportunity to ensure that he left the burning car alive, which leaves Christine stunned.

He witnesses Officer Ryan molesting his wife and later realizes that the producers of his television show propagate racist stereotypes about black people. At the scene of Hansen’s burning car (to eliminate evidence of a murder), he is able to find contentment and reconnects with his wife.

Christine Thayer, Cameron’s wife. She is molested by Ryan and becomes furious with her husband because he didn’t defend her. The two insult each other over their upbringings–as both Cameron and Christine have grown up in more privileged environments than many other African Americans.

The next day she is trapped in an overturned car due to a car accident and, by a twist of fate, Officer Ryan is the man who willingly endangers himself to save her life.

Get a verified writer to help you with Crash Character Analysis 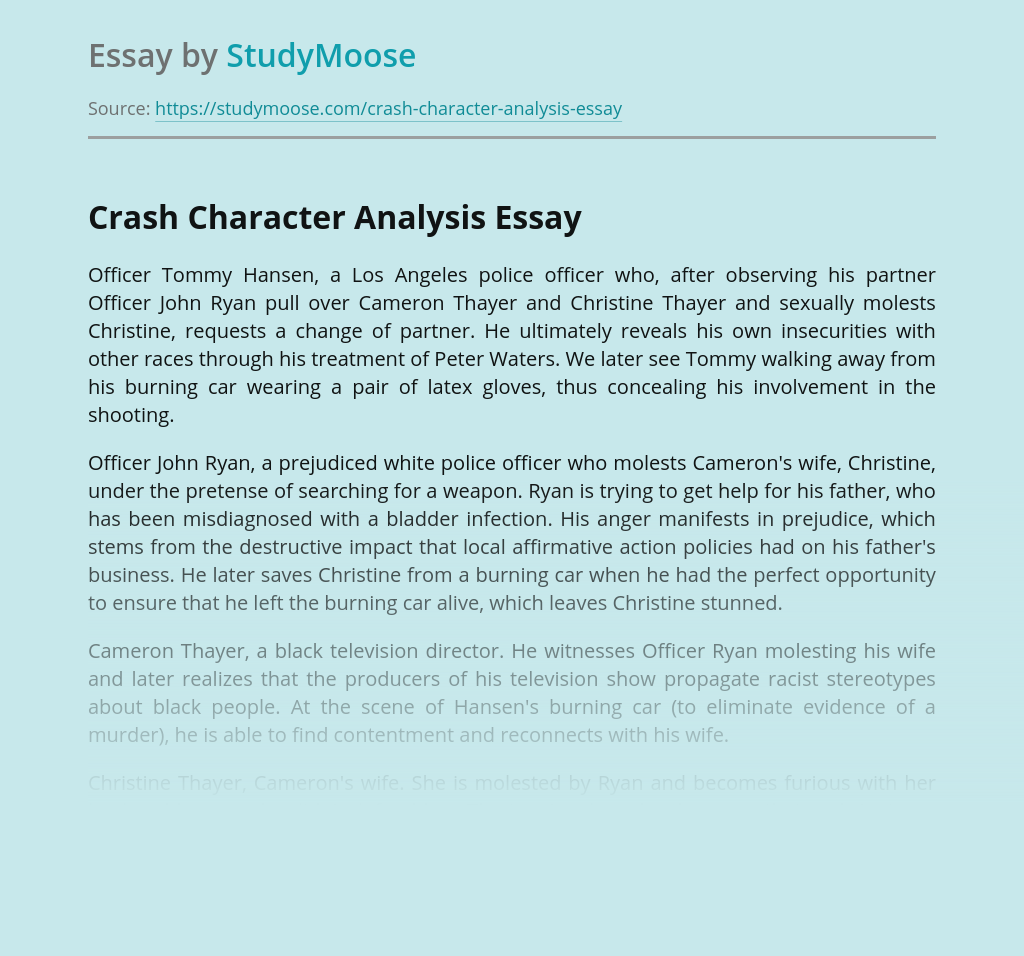 The Removalists raised three fundamental questions: One socio-cultural (Is Australian society violent of its essence?) Political (do the forces of law and order rest on violence?) Psychological (do all of us have the kinds of aggressive instincts or behaviour patterns which Williamson depicts?) Characterisation: The ocker character used an exaggerated language that existed in the...

The Whipping by Robert Hayden

Robert Hayden is one of the best-known American poets of his time. However, he is also one of the most underrated poets of all time, arguably not as much accolades as other poets of the same era. His poems exude admirable sincerity and tremendous grasp of poetic devices. His beautiful poem “The Whipping” is regarded...

Introduction Abusive Relationships are created mentally and physically. In my opinion, the definition for abuse describes a person with harmful intents; lacking concern, compassion, or affection for another human being. The following annotated bibliographies will express different stages of abuse in set climates. The purpose is to evaluate opinions of the authors selected with the...

Playwrights have various conventions at their disposal to position the audience to respond to the themes and issues that are presented. Nick Enright’s play Blackrock depicts the lives of teenagers in a community. Enright uses various techniques such as characterisation, dialogue, the plot and the setting to elicit a response to the issues. This includes...

Distortions Through Deception In Macbeth

In William Shakespeare’s play Macbeth, Macbeth, Lady Macbeth and the three witches destroy lives by their acts of deceit to create corruption, violence and an upset in the balance of good and evil. To be deceived implies a deliberate misrepresentation of facts through the words or actions, which is used by one to increase power....

The article on _Controversies Surrounding Mandatory Arrest Policies and the Police Response to Intimate Partner Violence_ by Amy Leisenring brings up a very interesting point on domestic violence among couples. Whether they are married or dating or if they are black or white. She makes a strong argument based on other research that has been...

Youth violence in the United States is a major social problem that will inevitably get worse. Criminologists and state authorities are more concerned on the issue of youth violence than adult violence because the crimes involving the youth are becoming more violent and are continuously increasing the number of juvenile offenders (Zimring, 1998, xi). During...

In the movie Boyz N the Hood there is a constant conflict that follows many of the characters. The movie takes place in South Central Los Angeles, which is a very dangerous neighborhood. There are lots of shootings, drugs, and other crimes which take place there on a daily basis. This is a predominantly African...