There is a famous Hawaiian saying, “You know if the Hawaiian harmonies are good if they give you chicken skin” (Alternative Hawaii, 2002) and, I must say, listening to the online radio streaming of KCCN FM100 gave me goosebumps. Being more attuned to “Western pop” culture, it was a pleasantly refreshing experience for me to sit for an hour and listen to contemporary reggae, urban music and ragga with an island beat that’s truly Hawaiian.

Fourteen original Hawaiian songs, including the Top 5 hits in KCCN charts, were played during a late afternoon program that also aired a couple of brief “Hele On” traffic news, a commercial each from Earth Share and Hawaii.

Don't use plagiarized sources. Get your custom essay on
“ Contemporary Hawaiian Music ”
Get custom paper
NEW! smart matching with writer

gov, and 8 radio ads encouraging the people to participate at the ongoing 2010 Census. The DJ on deck did not talk much except to give quick, in-between plugs for a party event and to introduce songs.

A distinctly noticeable feature in the contemporary Hawaiian music is its fondness to love and desire.

The soulful songs I listened to speak of the excitement of love, romancing the heart of another or accepting a love’s rejection. But even though the lyrics contain sad words, the melody is always upbeat and sensual. The island reggae beat and the smooth ballad is very easy on the ears especially when instruments, like the ukulele, saxophone and native drums blend together to produce the perfect harmony.

The result is one relaxed listener mentally transported in an island paradise in Hawaii, and its effect to music lovers is no less than rejuvinating the soul.

I think KCCN FM100, being a radio station that plays modern hip-hop and soul Hawaiian music, carries the familiar radio spunk of other American hiphop stations. The DJ was very energetic and in a party mood, and even the traffic reporter was such a chipper in delivering traffic updates as a local RnB song played in the background.

The advertisements aired between the 4:30-to-5:30pm radio show were mostly the varying versions of promoting the 2010 Census Count – explaining what the census results would mean to businesses, the improvement of social services and what it means to the future generation. I think delivering the message using both in English and the local dialect reveals a lot about the listeners’ profile of KCCN, which is a mixture of both modern and traditional Hawaiian folks.

I also believe that although all local songs aired were sang in English, they always make it a point to bring out the traditional Hawaiian flavor. This much is obvious in both the songs and commercials played. Listening to KCCN and the music aired there makes me realize how global Hawaiian music can be in terms of its appeal to both young and old, locals and foreigners. Everybody can appreciate an island style music inspired by the world-loved Bob Marley and urban rhythm of the modern RnB. 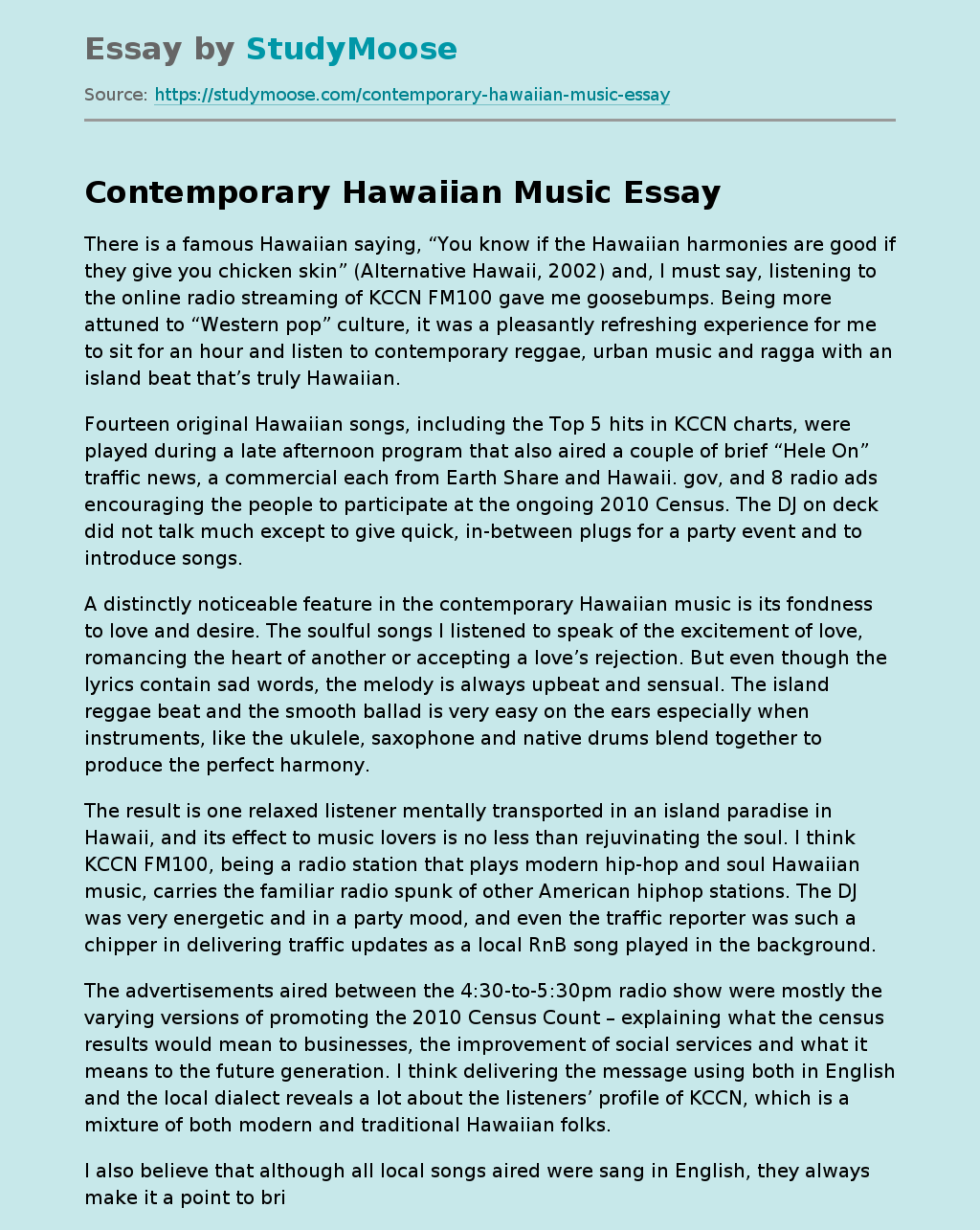