Were Australians against the introduction of conscription during WW1?As the war was happening people back home in Australia were starting to realise that the war was not as much about bravery and pride as they originally thought because very few men were returning, but the government needed young healthy men because of the amount of men on the front line dying and they needed to be replaced.

Australian men werent volunteering so in November 1917 prime minister, Billy Hughes wanted to introduce conscription to Australia and ask the people are you in favour of the proposal of the commonwealth government for reinstating the Australian imperial forces overseas? Conscription was like the lottery, you would be randomly chosen to go to war because of the day that you were born.

Don't use plagiarized sources.
Get Your Custom Essay on Conscription in WW1 Just from $13,9/Page

Australians were given the opportunity to vote for or against conscription and campaigns were made to support each point of view. Two referendums were held, the first on the 28th of October 1916 and the second on the 10th of December 1917, both referendums were lost, the second showed 1181747 votes against and 1015159 votes for conscription.

Two referendums were held because men kept dying on the front line and the government were getting desperate. Both referendums ended with majority no votes, the first with 72446 votes against and the second with 1181747 votes against. Women were the main target for pro and anti conscription campaigns because they were seen as weak fragile and sensitive. Propaganda was largely aimed at women to intimidate women and target their emotions, either to make them feel like they were sending their husbands and sons to die or that it was their duty to send them to fight for their country.

It was a hard decision deciding whether or not to vote for conscription. Some people thought they should vote yes because of pride and defending and protecting their country and coming back as a war hero and also because of loyalty to Britain because they were still part of their empire, voting yes or no also targeted Christian women because killing is a serious sin. Songs and posters were made to persuade Australia to vote yes or no. People were told that if you vote yes it is your fault they die but also that if you vote yes the country wont be taken over and that you could save Australia from the enemy. A white feather was sent to the people who voted no to represent and parade that they are cowards and to embarrass them publicly.

Conscription divided Australia and turned their worlds upside down. People didnt want to be forced to go to war or force someone to go to war because they realised how bad it was. Australians voted no because they wanted freedom of choice and not to be conscripted as if it was just a game. 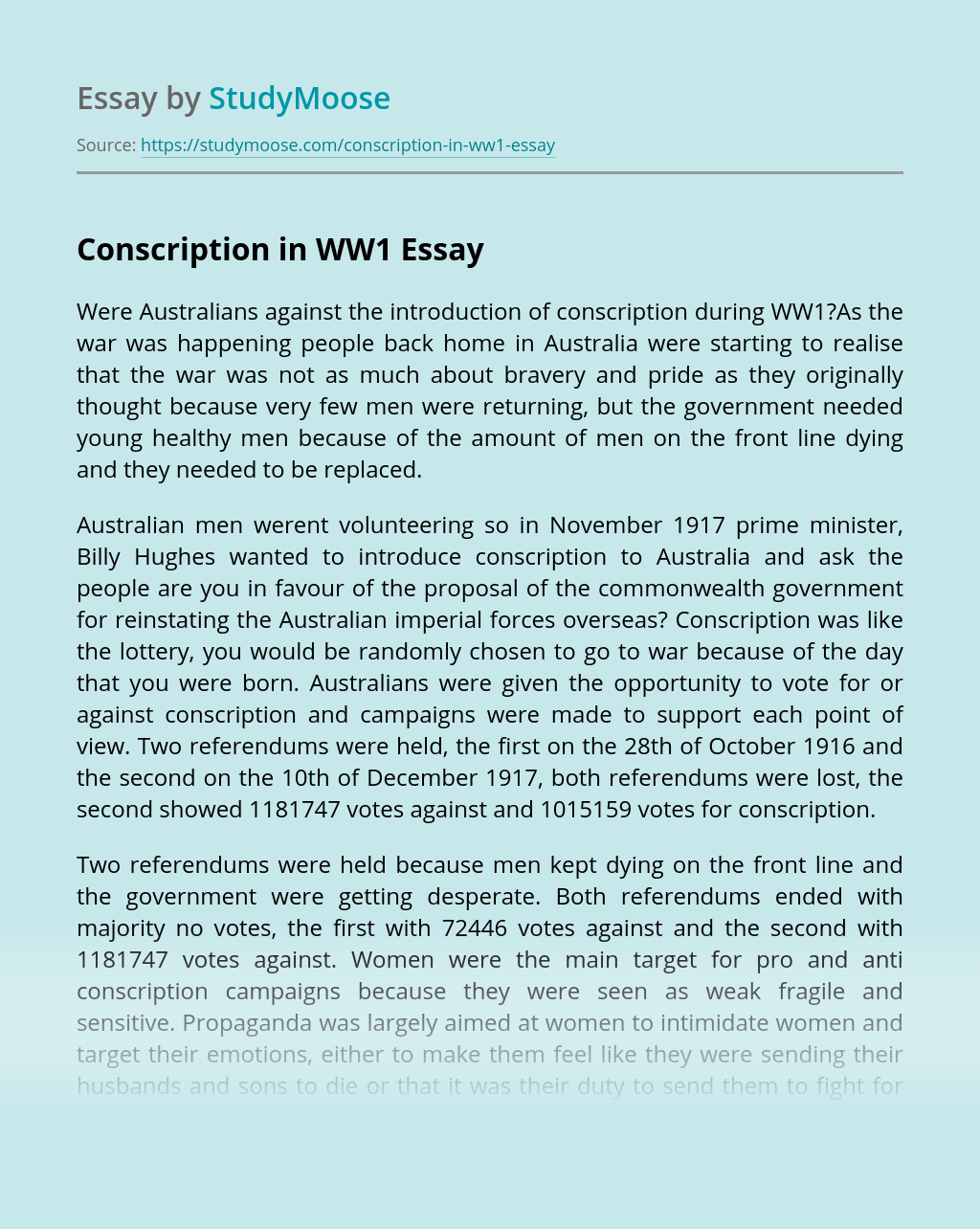 The Separation of Powers

Introduction Davenport S. & Parker D.’s statement (as above) explores the concept of the ‘separation of powers’ doctrine and how this is embedded within the ‘Commonwealth Constitution’. It also states that Australia is a ‘constitutional democracy’. To address the meaning of this statement it is important to separate the statement into individual questions. What is...

Eddie Mabo is one of the most famous and significant Australian Aboriginals. He is famous for campaigning for Indigenous land rights. He was born on the 29th of June, 1946, on Murray Island, in the Torres Strait. Eddie Mabo married Bonita Newhow and together they had ten children. In 1982 Eddie Mabo and four other...

View sample
Get Essay
"Dawn is at Hand" by Kath Walker

In the poem ‘Dawn is at Hand’ by Kath Walker, the author attempts to change people’s thinking about aboriginal people. The poem talks about a better future for all aboriginal people and letting go of their past. The author uses many poetic devices such as theme, repetitions and metaphor to enhance her message and inspire...

Arthur Schopenhauer once said “every men take the limit of his own field of vision for the limits of world “a vision is the best path way to understand culture. And today I will be talking about Australian vision through Douglas Stewart’s “eyes” .Australian vision are a reflection is Australian beliefs, value, and perceptions. In...

Ellie goes out camping in the bush for a week with her friends Homer, Lee, Kevin, Corrie, Robyn, and Fiona. Later on, they find Chris, one of their school friends. They find a way into a large, vegetated sinkhole in a remote area of bush the locals have dubbed “Hell”, and camp there for the...