Concept of Life in Tuesdays with Morrie

Imagine being an elderly man; you had started to notice yourself falling frequently, which to most people, would be because of old age. You start to agonize about your overall health, which leads you to multiple doctor appointments; eventually, you find out you have a rare disease called ALS. Then, you’d be living the life of Morrie Schwartz. The book about a true story; Tuesday’s with Morrie explains how Morrie had learned to deal with this fatal disease. The book is about an old professor, Morrie , and a young male, Mitch, meeting up on Tuesdays where they converse about life.

Don't use plagiarized sources. Get your custom essay on
“ Concept of Life in Tuesdays with Morrie ”
Get custom paper
NEW! smart matching with writer

Multiple aphorisms are expressed through out the book. Three of which I will be relating to my own life as well as explaining how they were taught. “Accept what you’re able to do and what you’re not able to do.” As well as, “Don’t cling to things, because everything is impermanent” and, “Don’t let go too soon, but don’t hang on too long.

Proficient in: Tuesdays With Morrie

Although these lessons were taught through Morrie, this aphorism had been expressed through Mitch. “Accept what you’re able to do and what you’re not able to do.” Mitch’s career was music; he had chosen his career to consist of him being a pianist. As the years went on, he had realized he wasn’t going to get as far as he hoped, which is when he switched his career. My first couple years of softball I was determined that I would play a specific position, first base.

As the years went on, I started to get more and more use to the fact that first base wasn’t meant for me, that is when I had to accept that I was unable to play that position, but I was able to play many others.

“Don’t cling to things because everything is impermanent.” The main example given for this aphorism would be Morrie’s ALS, Amyotrophic Lateral Sclerosis, which is also known as Lou Gehrig’s disease. ALS is a nervous system disease that weakens muscles and impacts physical function. His ability to walk, talk, and even breath became impermanent gradually with this disease. I relate to this through a childhood pet, a cat, named whiskers. i had clung to this cat for everything, including my happiness. He ended up being impermanent; which means I had to get rid of him.

Many times its easier to let go sooner then later, other times it’s the complete opposite. Morrie could’ve given up and had no hope for anything with his life when he found out he had ALS. Instead he decided to live each and everyday as if tomorrow he wasn’t going to wake up. He could’ve also been kept alive with multiple machines that would help him communicate as well as breath. He decided to live as long as his body could without overly excessive care. As any other kid I had a favorite toy, as I started to get older i had began to realize I had been holding onto this doll longer then I should’ve. “Don’t let go too soon, but don’t hang on too long.”

Tuesdays with Morrie is a relatable book to, not only myself, but to others as well. Not only can you relate to the characters, you also can learn valuable lessons that you will eventually need throughout your life. Many emotions were being thrown around in the book, which sent myself on an emotional rollercoaster. It still amazes me how this was a true story and how one professor could change so many people’s lives, without even knowing them.

Concept of Life in Tuesdays with Morrie. (2021, Dec 02). Retrieved from http://studymoose.com/concept-of-life-in-tuesday-s-with-morrie-essay 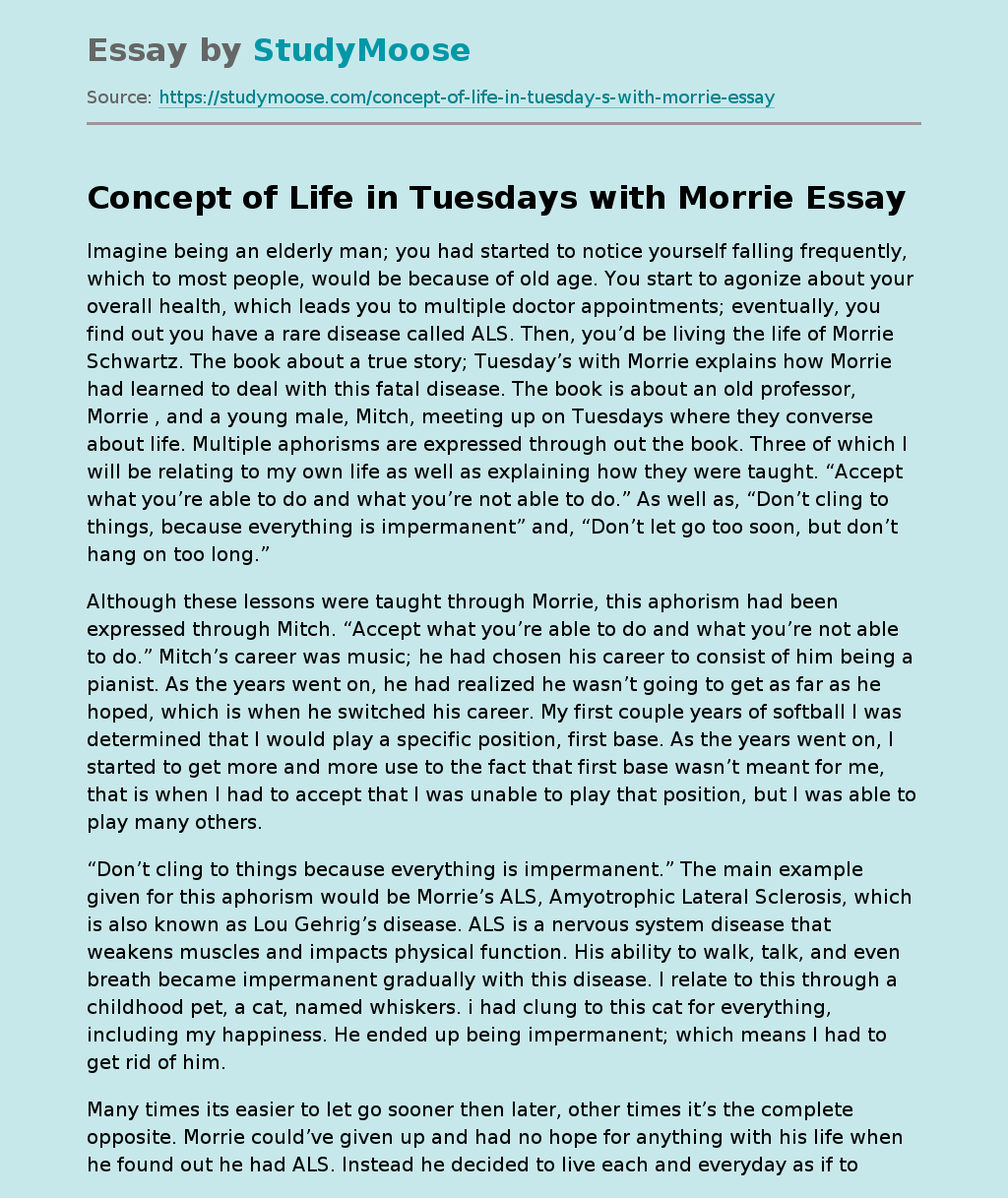