1. Yes, my opinion about Mitch did change as the book went on. As a young man in college, Mitch found a friend away from home. This friend happened to be Morrie, his professor. However, after Mitch graduated he was confronted by a world full of a “false” culture, foreign to a healthy one you can personally create. Mitch’s dreams of becoming a musician quickly drifted away, and became hidden behind the pursuit of money and a powerful career. As a sports columnist, Mitch was flipping through the television, looking for topics.

Don't use plagiarized sources. Get your custom essay on
“ “Tuesdays With Morrie” by Mitch Albom: Critical Thinking ”
Get custom paper
NEW! smart matching with writer

Coincidently, he ran into a show broadcasting Morrie and his heroic fight against death with a forgiving outlook on life.

Mitch, plagued by his promise of staying in touch after college, was disturbed even more at how time and sickness had changed the old man. He visited the old professor, and after having his last fourteen “classes” with Morrie on consecutive Tuesdays, Morrie finally passed away. Previous to Morrie death, it finally came clear of Mitch’s change when Mitch must accept that Morrie is dying and will not be with him on earth for much longer.

Mitch’s urge to yank the oxygen tube from Morrie’s nose is an action of fear; he is afraid of what will become of him without Morrie to guide him (a repeat of what happened after college).

2. I think that it is not fair to say who got more out of their Tuesday meetings. The reason for this is because although Mitch needed the guidance and lessons, Morrie also needed Mitch to know that Mitch fulfilled his promise of coming back to see him.

3. I do not think Mitch would have come back to Morrie’s house the second time if he hadn’t been semi-idled by the newspaper strike. I say this because when the “worlds culture” has you in a mindset of false priorities, it is hypnotizing. Although Mitch would have flashbacks of his times with Morrie, he was preoccupied with his job and Morrie was an afterthought of what he had become. Consequently, Mitch was becoming afraid of confronting Morrie because of his of not keeping his promise.

4. Morrie shouldn’t have been tougher or easier on Mitch. What Morrie was able to do with Mitch was transform him from being motivated by material wealth into a man who is motivated by love. Morrie also reveals that despite his old age, he is still changing, as every person does until his or her dying day. Just like the Pink Eucalyptus tree.

5. I think Mitch would have listened to Morrie before dying. During college, Morrie was Mitch’s biggest influence, and I don’t think that would change. Morrie seemed to have this astronomical knowledge in his words, that no one could resist inheriting and applying in their life.

6. Yes, this book makes Morrie’s death a public event because Morrie’s sickness was broadcasted on television and Morrie became an idle to many people.

7. Morrie referred to himself as a bridge between life and death. Billy Graham has had such a great influence on people because of his strength of words that describe his life before, in between, and after he became a Christian.

8. No, I know that Morrie would’ve not rather died suddenly. I say this because he explained how he felt lucky to tell his loved ones how much he cared for them, and to address the issues that he had trouble facing throughout his life. Although, it was a slow and painful process, Morrie got enjoyment out of it knowing that he was also helping other people through the cause, just like Mitch.

9. The most emotion I have ever expressed when losing someone was when my grandpa and dog died. I still have pain about my dog because I still feel its something that I could’ve prevented. However, when thinking about my grandpa this book relieves some pain that surfaced when I was reading this book.

10. I have no idea how Morrie would have reacted if he were diagnosed with ALS at Mitch’s age. I would think he would be more rational, and not accepting. I say this because as you go through life you learn things, which you apply to various things, and in return you gain more knowledge. So Morrie might not have been so easy going with the news.

11. Are we supposed to do this in class?

12. The role of meaningful coincidence, synchronicity, in the book was very relevant in Mitch and Morrie’s relationship. For one, if Morrie had diagnosed with (ALS) Mitch would’ve never seen the broadcast on television. Even if it was diagnosed, if Mitch would’ve not been involved in the strike he would’ve not seen that broadcast that night. So either way each one coincides with each other, making the reunion inevitable. Consequently, Mitch’s life was set back on track.

13. Morrie told Mitch about the tension of opposites. Everybody in life is pulled back and forth, wanting to do one thing, but is bound to do something else, something hurts you, but you know it shouldn’t. You take certain things for grated, even when you know you should never take anything for granted.

14. Death, Fear, Aging, Greed, Marriage, Family, Society, Forgiveness, and a meaningful life. All of these things we feel we need to do right or fulfill. My list would be similar if no the same because, I could use advice on all these topics, I am human and I make wrong decisions sometimes because of the tension of opposites but also because I don’t have the right guidance.

15. These choices that Mitch uses such as its structure, voice, tone, and flashbacks add to the meaning of the book. For the most part they are what make the book what it is, it is able to depict his feelings and add contrast to the changes that Morrie and him made.

16. College students today can miss out because they don’t apply to the college that will suit them the best. The apply to these high ranked colleges that may not be the best fit for them, therefore they aren’t going to get the most out of their potential. I think Morrie thought they were also

17. Personally I have gone through a brain tumor (AVM). After this experience I’ve had a different outlook on life. I feel my meaning is to use my god given talents to the fullest, and use everyday as if it’s my last. So yes, I say if you’ve found meaning you want to go forward.

18. People if taught right by their parents, or if strong enough mentally should be able to decipher whether following the world’s culture is what they want to follow. Most of the time this is not the case, and people aren’t able to set guidelines and morals. This book helps by showing you a perspective of life being very fragile.

19. As Mitch’s visits grew consistent he explored different cultures and how each views death. Christianity views death as beginning of a new life, when you are given a “new body” in heaven, and will live eternally with your God.

20. The importance of this ritual is that it shows that Mitch was not going to treat Morrie any differently because of his decaying state. He was going to be helpful, but non-encouraging.

21. I think that he wasn’t making a judgment on people who choose not to have kids, because it’s a personal choice, which you are entitled to. All he was doing was emphasizing the responsibility of what being a parent is like, and gaining the benefits and power of the most prevailing feeling in the world, which is love.

22. Like Mitch was during his college years at Brandeis, Peter acts tough. He has not asked for help from his family since his high school graduation, and has no intention of doing. When Mitch contacts him, he is very reluctant to establish a relationship with his brother, and leaves a message that he is doing just fine and does not need anyone else’s help. He also reminds Mitch that he does not want to talk about his illness. So in conclusion, Mitch and Peter’s relationship wasn’t too passionate, but Peter opened up to Mitch in the end.

23. This mentality of “only an open heart will allow you to float equally between everyone” will help the next time in a situation where I feel out of place or uncomfortable because it erases first impressions I have about people, but lets me know them through an open heart.

24. I agree with Morrie in this because values are what the premise of “your culture” is based around. If you marry a wonderful person that shares your values, then its going to be a smoother and healthier marriage than if you both have different morals.

25. In a way they would’ve carried a little less weight, but I is clear in the book that Mitch is a changed man after the lessons he had with Morrie on those special Tuesdays. 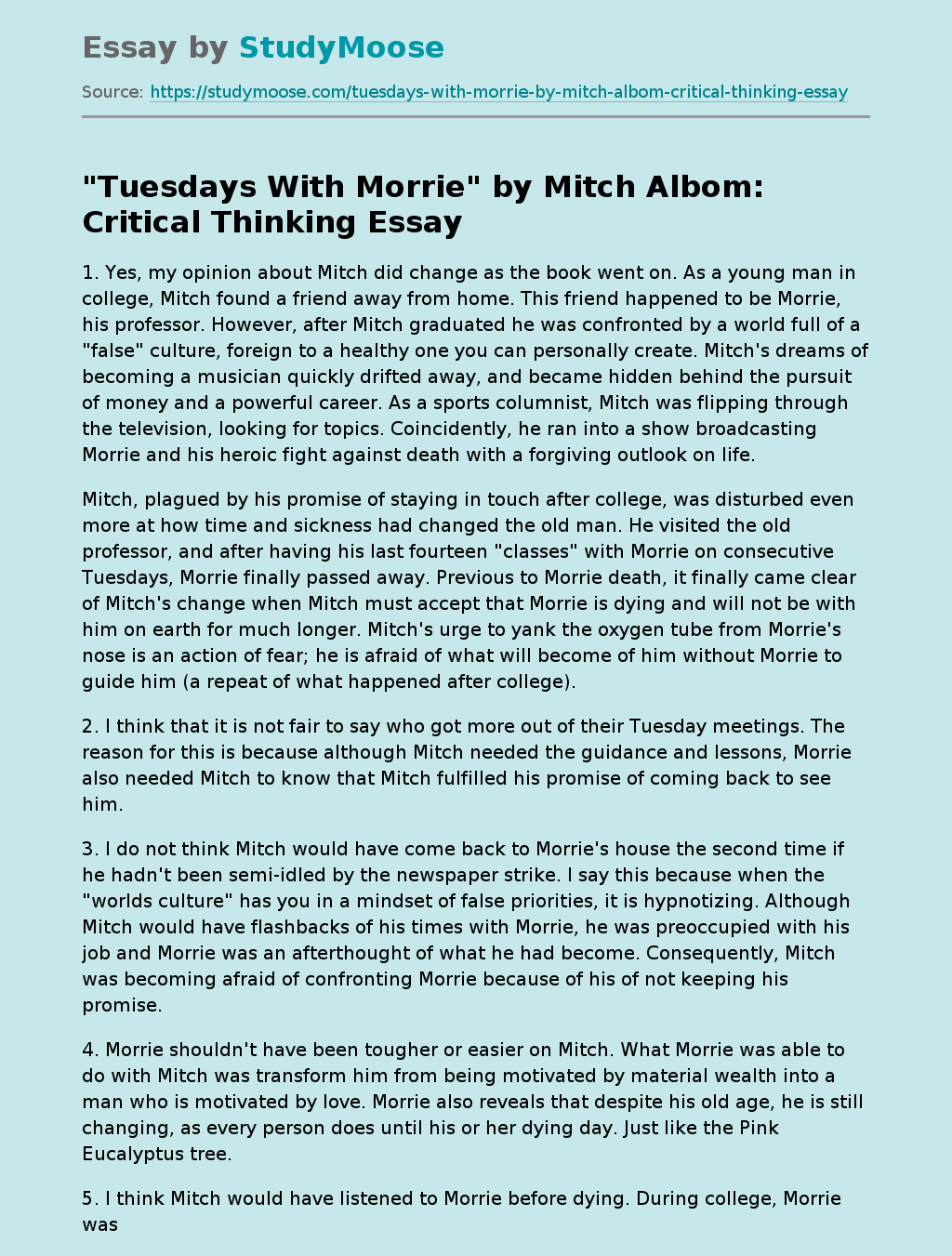