Sir Arthur Conan-Doyle’s story, The Speckled Band is based in nineteenth century Victorian England. This time period was one of confidence, as Britain became a major power in Europe and indeed the world. One of the numerous popular genres of literature that the Victorians warmed to during this time of confidence was Gothic tales (Mrs. Radcliffe’s Udolpho for instance) which tended to follow a fairly distinct pattern. Firstly they were based upon the use of the macabre, which included frightening screams and often murder (as seen in The Speckled Band).

Secondly, Arthur Conan-Doyle’s tale is set in a secluded mansion on a countryside estate in western Surrey owned by a rich English family, reflecting the wealth of Victorian England. These picturesque and to some extent romantic settings are another aspect familiar to Gothic tales, along with the use of exotic or foreign influences (such as the wild animals kept by Doctor Roylott). This leads us on to the final clic of these Gothic tales – the arch villain and female victim (Doctor Roylott and Ms Helen Stoner respectively).

The Victorians were rather fond of this somewhat rigid structure of story and The Speckled Band proved to be no exception, suitably reflecting the Victorian era.

Raymond Chandler’s, I’ll Be Waiting is set in 30’s America, which was during the Depression and Prohibition eras. It was a time of ambiguity and organised crime following The First World War and prior to the second. The specific genre of this story is American Street Crime.

Unlike The Speckled Band the settings throughout the story are claustrophobic and predominantly urban: The street was dark, silent. The rumble of traffic on Wilshire, two blocks away, had no body, no meaning. I’ll Be Waiting uses its locales effectively to reflect the sleazy American atmosphere of the 30’s.

The story proceeds to further develop this aura through use of character. The main character of I’ll Be Waiting, Detective Tony Reseck, echoes the emotions of the decade in numerous definite ways. Firstly he is a solitary and somewhat shy person, whose appearance is that of a man who lacks confidence (reflecting the era). The author describes him as: A short, pale, paunchy, middle-aged man with long, delicate fingers clasped on the elk’s tooth on his watch chain.

This author’s description of his main character in this story diminishes Tony Reseck. The reference to the elk’s tooth (a good luck charm) represents Reseck’s lack of self-belief and that he works on instinct (not as assured as Holmes’ technique) again reflecting the era. Additionally it shows the fallibility of the detective’s character and his love for a young lady named Eve Cressy reinforces this. By showing that his main character has human aspects the author is indicating that Tony Reseck is a normal person of the times such as the reader would have been. This relation between the story and the era helps the reader to associate and almost become a part of the tale.

However, Reseck may not be as average as the reader is led to believe. During the story Chandler includes several subtle pieces of information, hinting to his reader that there is perhaps a slight element of mystery/deceit to his hero: The movement seemed to be a thing imperfectly perceived, an error of vision. But this touch of mystery is masked by Reseck’s lack of self-belief and relatively un-dynamic approach when compared to Holmes. This lack of enthusiasm almost, is emphasised by the author’s use of belittling adverbs when referring to his hero: delicately, gently, sighed, gravely, softly, mockingly. Furthermore Raymond Chandler portrays Tony Reseck as a rather solitary person: He always knew if anybody was close to him. 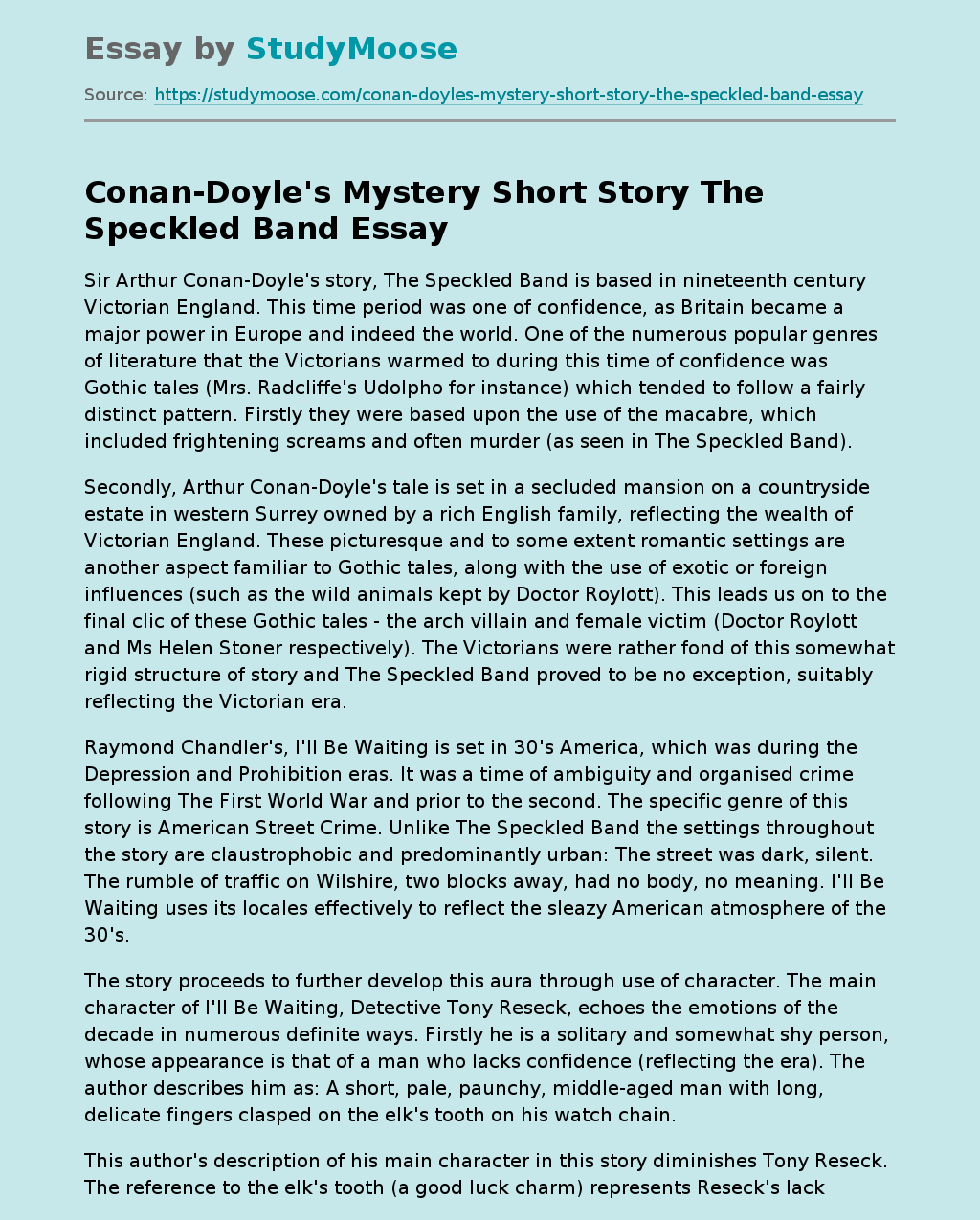