In the history of the United States, Politics was always complicated. It is to be expected. After all, this was when the government was just starting to come into its own. As it started to grow, the country got more complicated. There were different people debating on how this country should be run. Some of these people were Thomas Jefferson and Alexander Hamilton. These founding fathers had many different opinions on political and economic philosophies as well as domestic and foreign policies.

Don't use plagiarized sources. Get your custom essay on
“ Comparison of Thomas Jefferson and Alexander Hamilton ”
Get custom paper
NEW! smart matching with writer

Before we talk about Jefferson’s and Hamilton’s different views, we need to understand the underlining reason why these differences existed. While this reason doesn’t explain all their opposing views, it sure explains some of them. Hamilton viewed the nation’s future depends on the wealthy people in this country while Jefferson viewed its future in the hands of small, independent farmers. While Jefferson believed in democracy, he believed the people who owned land should be the ones participating in government.

(Farless, Hamilton’s Economic Plans and Opposition by Jefferson and Madison) Now that these facts were explained, let’s talk about their economic policies.

Alexander Hamilton believed that the country’s finances were very important. He wanted to solve the country’s debt. To do so, he wrote a report called: “Report on Public Credit’ in 1790. This report had two parts: the first part was about the national debt and the second part was about the remaining state revolutionary debts. In the second part, he basically talked about why Congress should establish the national bank.

The power to do so is in the “necessary and proper’ clause of the Constitution. He also said that the Constitution shouldn’t be followed word for word, but it had to be followed with the flexibility to meet the needs of the country. The Constitution shouldn’t be a limit instead it should be a beginning. (Farless, Hamilton’s Economic Plans and Opposition by Jefferson and Madison) Also of these points are important because Jefferson disagrees with most of them. Jefferson not only didn’t like the idea of a national bank, but he also disagreed with Hamilton about the Constitution. He believed that Constitution should be a limit. Jefferson didn’t like a national bank because it was similar to mercantilism. Mercantilism went against laissez-faire economics, which Jefferson supported. (Farless, Hamilton’s Economic Plans and Opposition by Jefferson and Madison) It makes sense that Hamilton cared so much about finance because he believes wealth (by extension wealthy people) were important for the country. Jefferson probably thought that Hamilton wanting to be more flexible with the Constitution gave too much power to the rich. However, Jefferson and Hamilton had different views on other subjects.

In 1793, war broke out again between the French and English. America wanted to stay neutral, but Jefferson and Hamilton had differing opinions on how best to approach our this neutrality. (Farless, Washington’s Administration and Differences Over Foreign Affairs) Jefferson was Washington’s Secretary of State and he believed that America should be on France’s side in this conflict. Hamilton was Washington’s Secretary of Treasury and he believed America should be on Britain’s side. Jefferson wanted this because he respected the French. He saw the French Revolution as a continuation of America’s revolution. In addition, he wanted us to keep the British guessing as to what the Americans might do. Also, Jefferson didn’t want the US in break off the treaty they had with France. (Farless, Washington’s Administration and Differences Over Foreign Affairs) In contrast, Hamilton wanted to be Britain’s side because he was afraid of the French Revolution and he thought America would have better trade relations with the British. (Farless, Washington’s Administration and Differences Over Foreign Affairs) There were other problems happening because of Jefferson’s and Hamilton’s views.

As the fight continued between Britain and France, America became more polarizing. It was dividing into groups which were pro-Hamiltonian, which meant pro-British, versus the pro-Jeffersonian, which meant pro-French. Washington stepped and said that American had to be completely neutral. As a result, it took away Jefferson’s bargaining power and the British took it as a sign of weakness. (Farless, Washington’s Administration and Differences Over Foreign Affairs) However, Washington did not cancel the treaty with the French that American had. This action Hamilton feel sad because was something Hamilton had wanted to break the revolutionary treaty with the French. (Farless, Washington’s Administration and Differences Over Foreign Affairs) Jefferson and Hamilton had many differences but there was one of them that had the greatest impact on America. This was Jefferson.

Thomas Jefferson was the Founder Father that had the greatest impact in shaping our nation’s history compared to Hamilton. This is true because of all the changes that Jefferson caused he became president. The cause of these changes was the fact that Jefferson did not agree with Hamilton’s policies and he wanted to help farmers. His opposition to a national bank is the reason why he allowed some of Hamilton’s plans to expire on their own, such as allowing the National Bank charter to expire in 1811. However, Jefferson also caused many problems. (Farless, Jefferson’s Policies and the War of 1812) Jefferson caused many problems with his beliefs.

Jefferson’s desire to have an economy depending on farmers over a manufacturing economy meant that the United States had to depend on the European nations of England and France for manufactured goods. This dependency caused problems for the US. These problems include leaving the United States vulnerable to attacks when war broke out between England and France again. (Farless, Jefferson’s Policies and the War of 1812) These attacks might have contributed to the polarizing views America was developing on if we should side with the French or the British. Jefferson also accomplished many things while aiding farmers.

As discussed above, Jefferson viewed America’s future as resting with farmers. As a result, he took several steps to facilitate westward expansion to help farmers. Jefferson’s policy of westward expansion continued to bring the desire for more land. However, this caused trouble for the American-Indians. (Farless, Jefferson’s Policies and the War of 1812). Some accomplishments that happened because of Jefferson’s views on farmers are the Louisiana Purchase and Compact of 1802. In the Compact of 1802, there was an agreement that Georgia give up its western lands if the Federal government would help remove the American Indians from their lands inside Georgia’s borders. The Louisiana Purchase in 1803 was the most important accomplishments of Jefferson’s presidency. (Farless, Jefferson’s Policies and the War of 1812) Despite his many faults, Jefferson’s views for the people were more morally good than Hamilton’s views for the rich. Jefferson’s align more with the modern positive views on America. Jefferson even accomplished more than Hamilton. Therefore, he had the greatest impact.

In conclusion, these two had many differences. However, they were also very important in American history. Jefferson’s and Hamilton’s views have shaped Congress to this day. For this reason, these amazing men should be celebrated. They will serve generations to come. 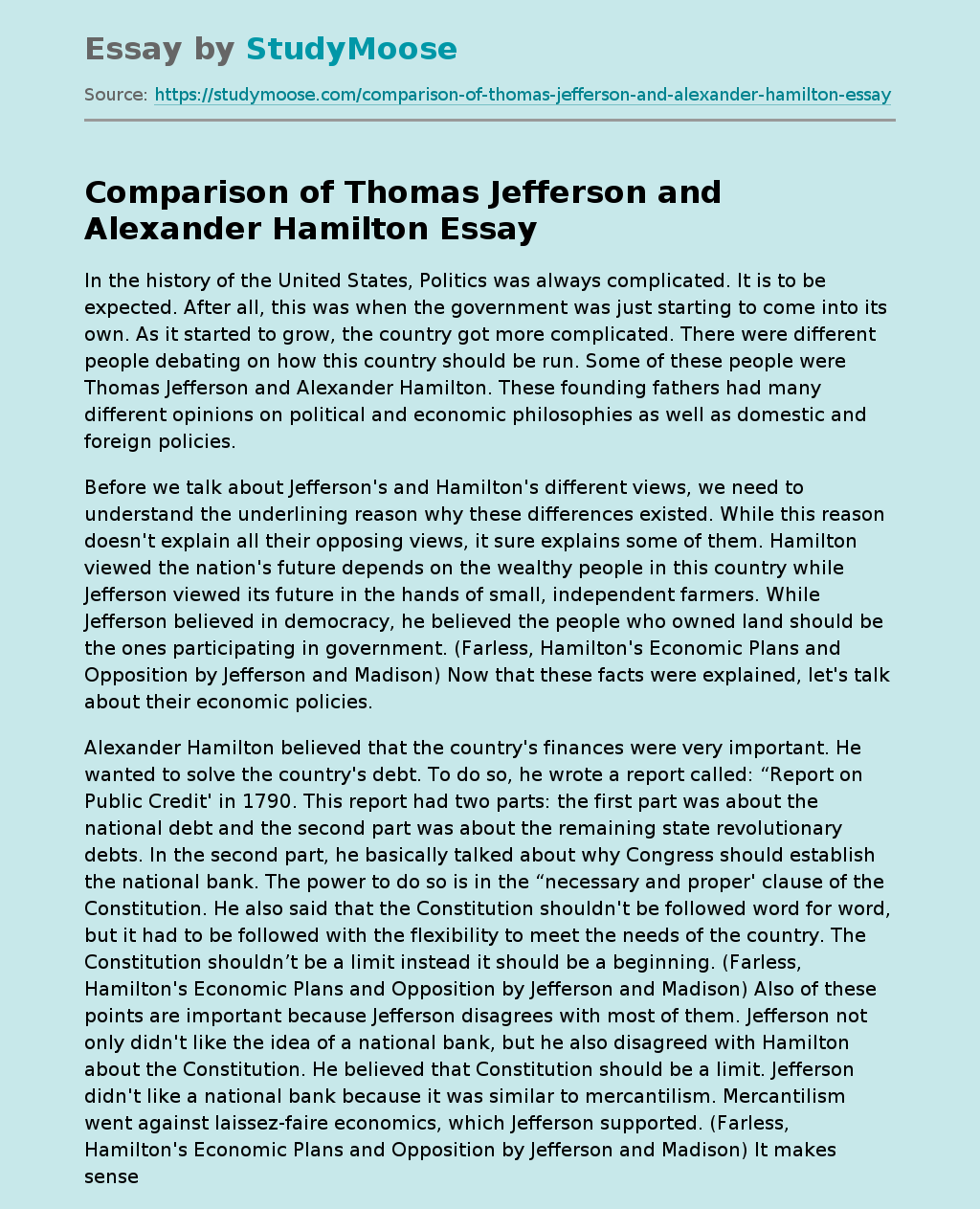