Symphony No5 vs Eine kleine Nachtmusik

Two names that were prevalent during the Classical era of music were Ludwig van Beethoven and Wolfgang Amadeus Mozart. These two composers have written many pieces of music, but two that stand out are Beethoven’s “Symphony No. 5” and Mozart’s “Eine kleine Nachtmusik”. Both of these pieces were composed within twenty years of each other, and parallels between the two pieces of work can be noticed. Even though the two pieces are similar in terms of structure, each has its own distinctions in terms of its mood, melody, and rhythm.

Don't use plagiarized sources. Get your custom essay on
“ Comparison of Beethoven’s and Mozart’s Classical Music Pieces ”
Get custom paper
NEW! smart matching with writer

Analyzing the structure of “Symphony No. 5” and “Eine kleine Nachtmusik” can reveal the similarities of the two pieces. As both pieces are composed in a sonata-allegro form, they are divided into three main sections: the exposition, the development, and the recapitulation. Both works begin with an exposition, a major theme that will be prevalent throughout the song. The exposition is followed by a second theme that contrasts with the first, but still retains the main theme of the song.

Both pieces have a second theme that incorporates a slower rhythm to give the listener a break from the more dramatic tones of the first.

The second theme then transitions into the closing theme, which wraps up the first two themes and prepares the audience for the next section of the piece. After playing the exposition for the first time, each piece then repeats the exposition a second time, allowing listeners to experience theme again before the development.

The development is a section of a piece that takes the main theme of the exposition and manipulates it. Following the development is the final section, the recapitulation. In the recapitulation, the three themes from the exposition are repeated, but with slight differences that give the audience a different feel for the piece. Both works also end with a coda, a section added to the end of a piece that repeats the main theme of the piece, and brings it to a close.

While the structures of the two pieces are similar, taking a closer look at the individual sections of each piece can reveal differences in the way each piece is composed. The exposition of “Symphony No. 5” begins with a strong four note motive, and the minor key establishes a dark and malevolent mood. The melody then changes in the second theme when the woodwind instruments come in with a major key. The rhythm picks up in the closing theme, lightening the mood before the first theme is repeated, bringing the rhythm and mood back to its previous state. The development is announced with French horns, and the four note motive is heard throughout this section with different instruments and different variations of the motive.

The melody becomes more complex as there are many different layers of instruments playing the same notes at different octaves. The development ends with a light melody of woodwinds leading into the recapitulation, with the motive being played along with percussion, resulting in a dramatic change of the mood. “Symphony No. 5” ends with a coda that gradually builds its rhythm with alternating instruments before slowing down and repeating the motive one last time for an intense ending.

The exposition of “Eine kliene Nachtmusik” establishes the theme with a quick rhythm in the major key that sets a bright, upbeat mood. The piece transitions into the second theme that stays in the major key with rapid notes and a crescendo before slowing down into a softer dynamic with a slower pace. The exposition ends with a closing theme that slowly builds up the rhythm and melody of the song and transitions back into the first theme. There is not a drastic change in mood as there was in “Symphony No. 5”, and the overall rhythm of “Eine kliene Nachtmusik” is faster.

The development takes the closing theme and plays around with it, manipulating the melody and building rhythm before going straight to the recapitulation. The second and closing theme of the recapitulation are both in a different key, giving the two sections a different feel. There is a coda in “Eine kliene Nachtmusik” as well, but it is not as lengthy as the one in “Symphony No. 5”. It also features a fast rhythm that repeats the main theme of the song before closing it off. 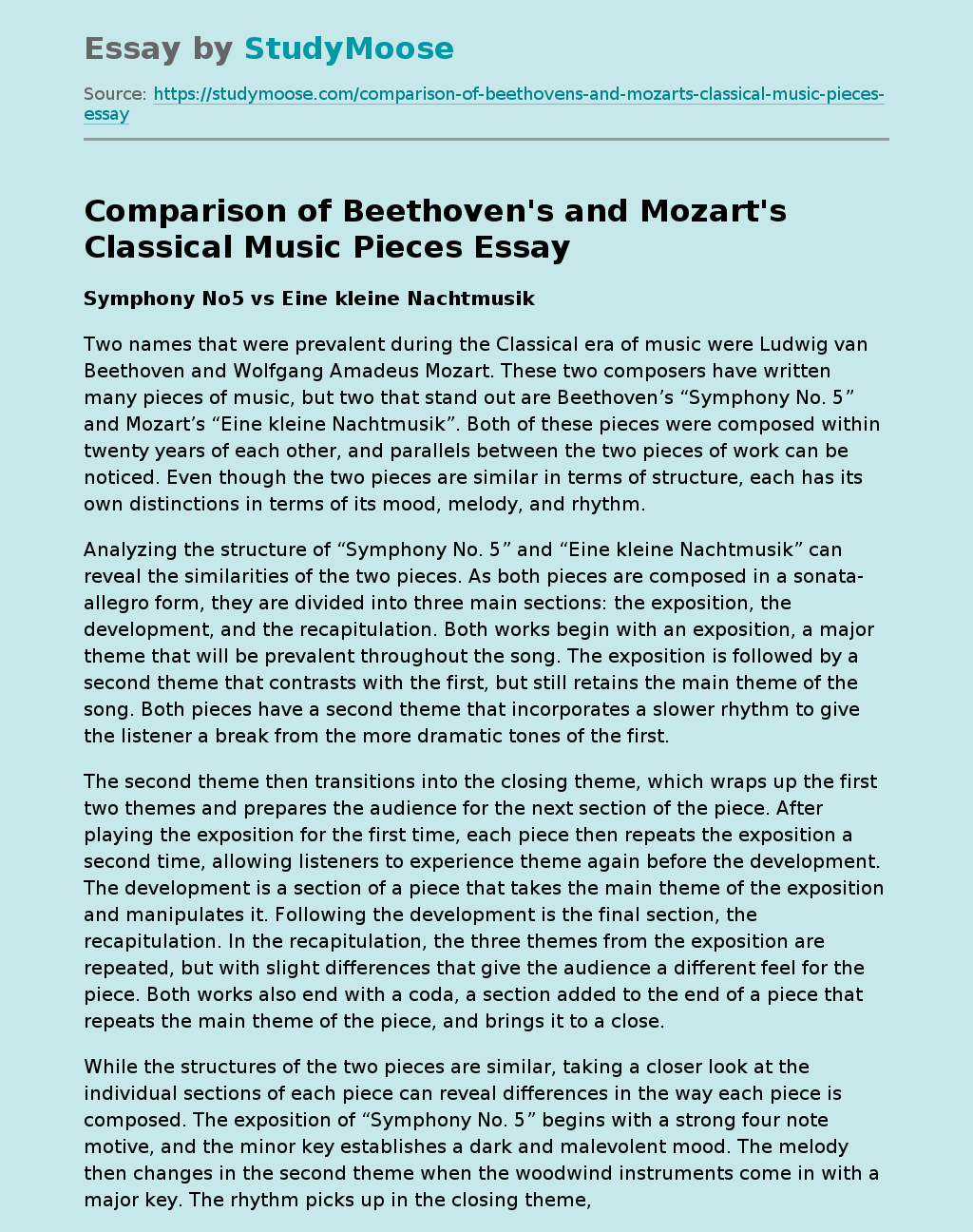