Is it inhumane to arrest and convict a person of terrible crimes, even if it is not yet committed, if it is certain that it will be? Utopia is an imaginary place in which everything is perfect; in comparison, dystopia is an imaginary state in which the condition of life is extremely bad as from deprivation, oppression, or terror. George Orwell’s 1984 (1949), is a novel based on life in a dystopian setting, with a totalitarian government centered on war and hatred.

Turn in your highest-quality paper
Get a qualified writer to help you with
“ Comparison: Minority Report and 1984 ”
Get high-quality paper
NEW! AI matching with writer

Steven Spielberg’s Minority Report (2002) is a film in a futuristic setting with a system which predicts future murders so that citizens live a homicide-free utopian life.

Winston Smith is the main character in 1984. His rebelious views on his society and government cause his arrest for ‘thoughtcrime,’ for which he is brainwashed until he complies to his society’s views. In Minority Report, John Anderton (Tom Cruise) begins by completely trusting the system which allegedly predicts murders before they happen.

In fact, Anderton is an officer of precrime himself, and is responsible for figuring out the specific details of the murders. However, when it is revealed in the film that Anderton will murder a man he has not even met, he tries to fight the system to prove his innocence.

The idea that power corrupts and absolute power corrupts absolutely is the central message of both 1984 and Minority Report. This is because technology is used to enforce power, it is purported to be infallible, and the result of the misuse of power is corruption.

The use of technology to enforce corrupt power is comparable in both 1984 and Minority Report. Firstly, in both societies technology is used to give the citizens statistics about how much the state of living has improved since the source of power was created. In 1984, the announcer on the telescreen reads, “‘Attention comrades!

We have glorious news for you… the standard of living has risen by no less than 20 per cent over the past year. ’” (Orwell 61). Similarly, in Minority Report, the Precrime service announcer proudly boasts that “‘within three months of the precrime program, the homicidal rates in the District of Columbia had reduced 90%’” (Minority Report). In both societies, statistics are manipulated to citizens to encourage them to appreciate the government. Also, technology is used in both of these works so the government always knows where each individual person is.

In 1984, this is done by the use of telescreens, which “received and transmitted simultaneously. Any sound that Winston made, above the level of a very low whisper, would be picked up by it, moreover, so long as he remained within the field of vision which the metal plaque commanded, he could be seen as well as heard” (Orwell 5). In Minority Report, retina scanners are in every public place, and eye-scanning spiders can crawl into houses and apartments at any given moment to locate everyone. In both 1984 and Minority Report, technology is used to monitor people.

The people in the novel 1984 are monitored so any thoughtcrime or illegal behaviour is detected by the use of telescreens in every room, as well as devices hidden in the outdoors which record sound. Similarly, the citizens in the film Minority Report are monitored to detect any sign of potential murder. In 1984 and Minority Report, technology is used by the government to enforce power reinforces the corruption of the government itself. As well as the use of technology, the believed infallibility of power in both 1984 and Minority Report leads to corruption.

In 1984, as well as Minority Report, the leaders of the government system hold unquestionable authority. The god-like figure, Big Brother, in 1984, is loved by all his loyal followers: “Big Brother seemed to tower up, an invincible fearless protector” (Orwell 17). In Minority Report, the ‘precogs’ which predict homicide are the guardians of the people; “in a way… they give us hope… hope of the existence of the divine” (Minority Report). Secondly, the power source is purported to be “perfect”. In both societies children are brainwashed by the system so they grow to be adults with full faith in it.

The children’s Spies program in 1984 “turned [the children] into ungovernable little savages, and yet this produced in them no tendency whatever to rebel against the discipline of the Party” (Orwell 26). Comparably in Minority Report, children are seen touring the ‘Department of Precrime’, on a school field trip to learn more about the system. When people are brought up with only knowledge of one system, it results in generations of loyal supporters. Lastly, the systems in both societies continue to be foolproof due to their control of people by fear and influencing their daily lives.

In 1984, the Party does this by the fabrication of the war, as well as pessimistic propaganda. An example of this is the poster that is plastered all across the city for ‘Hate Week’: “from whatever angle you looked at the poster, the muzzle of the gun magnified by the foreshortening, seemed to be pointed straight at you” (Orwell 156). The method is more subtle in Minority Report, but it is still present; the show “COPS” is shown on television to emphasize the horror of crimes, so the public will support the Precrime program.

Due to these factors the source of power is impossible to be fought against; consequently, corrupt governments maintain complete control. A source of power which is infallible has the same effect on its citizens in 1984 and Minority Report alike. In both, the main characters are forced by their society to do whatever they can to survive. As Iris Hineman (Lois Smith) in Minority Report says, “‘When the chips are down, when the pressure is on, every creature on the face of the Earth is interested in one thing and one thing only—its own survival’” (Minority Report).

This is relevant in 1984 when Winston is discussing with Julia what will happen when they get caught; Julia says, “Everybody always confesses. You can’t help it. They torture you” (Orwell 173). Similarly, in Minority Report, John Anderton is being hunted down for the crime he has not committed and he says, “Everybody runs” (Minority Report). The source of power has the same effect on the citizens in the different societies. Secondly, the offenders of crime in 1984 and Minority Report are sent to similar places.

In 1984, “thoughtcrime” offenders are sent to the Ministry of Love, which is “a place impossible to enter except on official business, and then only by penetrating though a maze of barbed-wire entanglements, steel doors, and hidden machine gun nests” (Orwell 7). In Minority Report, ‘precrime’ criminals are sent somewhere which resembles this; in both places people are essentially brainwashed so they cannot commit any more crimes. Lastly, the people in power by the government are corrupt because they use unethical tactics to arrest ‘supposed’ criminals.

In 1984, the children are turned against their parents if they suspect them of ‘thoughtcrime’ and they are rewarded for this: “‘child hero’ was the phrase generally used” (Orwell 32). In Minority Report, the government is in the wrong because they arrest people who may have no, or little, intention of carrying out the murders that have crossed their minds. The people in power are corrupt because they use unethical tactics to keep the society as they believe it should be. The result on the people exposed or involved in the government’s power is similar in both works.

Power corrupts and absolute power corrupts absolutely; Orwell’s 1984 and Spielberg’s Minority Report are two works which support this, due to the similar uses of technology to enforce power, the way power is seemingly flawless, and the effect the corruption has on the people. The idea that power corrupts can directly relate to occurrences in real life, such as Hitler taking over Germany and effect that had on the whole world. Corruption means to act dishonestly in return for personal gain, specifically power. Power and corruption are an endless cycle with fatal effects on society. 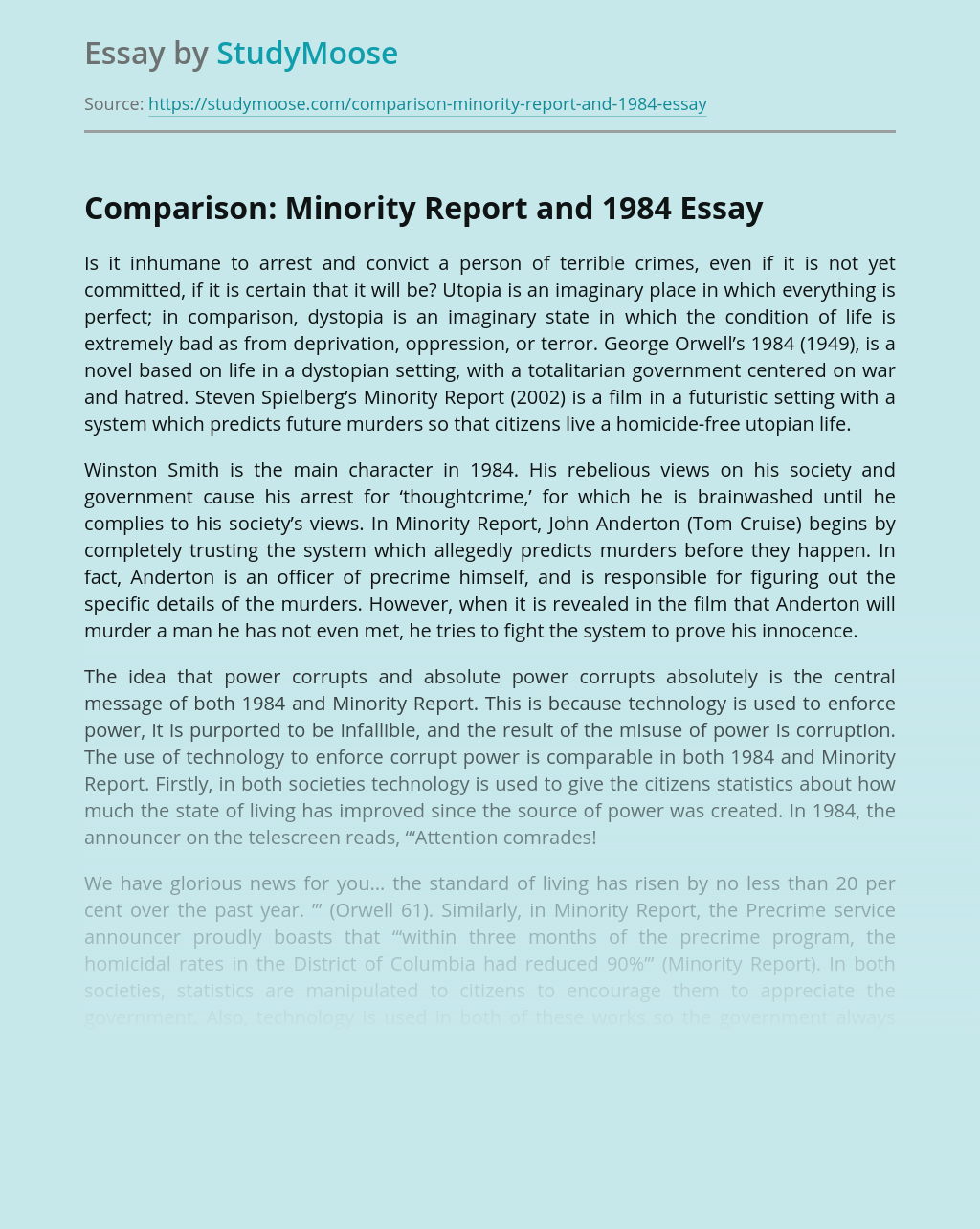 Turn in your highest-quality paper
Get a qualified writer to help you with
“ Comparison: Minority Report and 1984 ”
Get high-quality paper
Helping students since 2015
Stay Safe, Stay Original