Within the Asian country lie many cultures, beliefs, religions and much more. For example, the Cambodians and the Filipinos. Cambodia is located in southeastern Asia, bordering the gulf of Thailand, between Thailand, Vietnam, and Laos. The Philippines is located in Southeastern Asia, archipelago between the Philippine Sea and the South China Sea, east of Vietnam. Both countries have many differences and similarities.

In the Cambodian culture there are many beliefs. A lot of Cambodians believe in superstition, an irrational belief arising from ignorance or fear.

Don't use plagiarized sources.
Get Your Custom Essay on Comparing & Contrasting: Cambodians & Filipinos Just from $13,9/Page

One of the major superstitions of the Cambodian culture is Spirits of our ancestors. Folk tales explain and describe how and why a spirit cant hurt you but they can discipline you, for example the flying head. The flying head only disciplines people when they are afraid and alone in the woods. Also when two people split a pole means that they would go their different ways and split their friendship.

In the Filipino culture there are also many beliefs.

Superstition and ghosts are also a main belief in the Philippines. One of the known folktale ghost story is called the Aswang. The name translates to “To be detached from one part of the body. This creature flies around at night sucking blood and attacking animals and people. It is said that during the horizon, the Aswang takes on the appearance of a dog, whose front legs are longer than the back legs.

Most of the Cambodians believe in the religion Buddhism. They would take daily walks to the temple to light incenses, bring food for their deceased family member or monks. May 15th is a major holiday in the Cambodian culture, the day when their holy god they worship in the name of Buddha was born, the day he was enlightened, and the day he died. The way Cambodians greet a Buddha or monk is that they would put their palms together and bow for their respect. Cambodian New Year is also a major Cambodian holiday. Its a celebration or more like a festival with food stands to clothing.

Most of the Filipinos take their belief for their religion to the extreme. The main religion in the Philippines is Catholic, Christian or other forms of religion. People would hang themselves on a cross just like Jesus did just because they believe in their religion strongly. They would usually attend church on Sundays, they would sing, and listen to the pastor read from the bible.

The two countries also do have some similarities. One example for a similarity is that both cultures sometimes eat with their hands. Another example is that they both have similar superstition beliefs and folktales, just different stories. When you arrive at either a Filipino or Cambodian house you would have to take off your shoes. Finally both cultures take respect seriously, you have to bow to your elders and bless them or they bless you.

Within the Asian country lie many cultures, beliefs, religions and much more. Cambodians are very superstitious and believe in mostly Buddhism. Filipinos are also very superstitious but have different folktales and most Filipinos are Christian, Catholic, or some other type of religion. Both countries also have a lot of similarities in their cultures; they both respect their elders and take respect seriously. 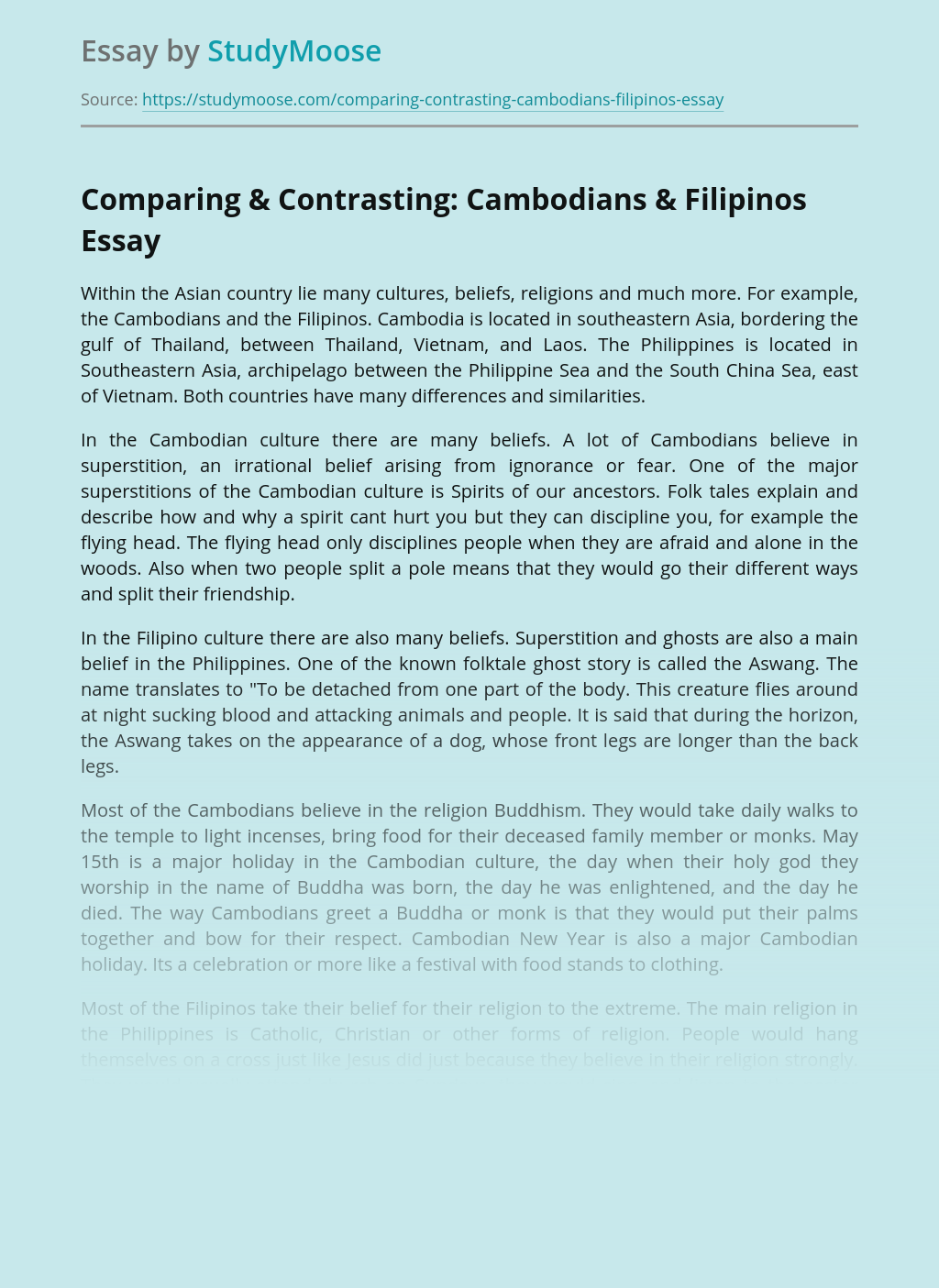 The Four Noble Truths is very important teachings that Buddha made about 2,500 years ago. He made the Four Noble Truth’s to try to overcome self-centeredness and to potentially end all suffering. This paper will support Buddha’s ideas that all dissatisfaction from human beings comes from being greedy, possessive and selfish. Most people argue that... VIEW ESSAY

View sample
Get Essay
Monkey: Journey to the west

Being at peace with one’s inner self sounds inviting but some aspects of many different religions can be hard to grasp at times. While most religions influence others, some have ideas and beliefs from sources unknown. Hinduism and Budhism are two of many religions. Having many similarities, their differences are what make them unique. Hindus... VIEW ESSAY