Burgess’s developed the concentric zone model in 1924. He believed that the CBD is located in the middle.

Don't use plagiarized sources. Get your custom essay on
“ Compare and contrast urban land use models from 1920-1970’s ”
Get custom paper
NEW! smart matching with writer

This is where the social, commercial and cultural focus. This zone contains department stores, specialist and high order goods, cinemas, hotels etc. there are very few places to live in this zone, and mainly only offices and multi national chain stores because this area has very high land values, so only big companies can afford to pay the rent.

The zone in transition (or the inner city) surrounds the CBD. This area contains car parks or vacant and derelict buildings.

The low class residential zone surrounds the transition zone. This area contains some of the older often terraced housing areas of the city. Originally, the area housed families who moved out of poor quality housing in the transition zone, but who still need to live close to their working place because of high travel costs.

High class residential zone contains mainly detached houses with large gardens and green open space, which only the rich can afford to live in and commute to work everyday.

Burgess based this model on ecologist’s ideas such as the process of invasion and succession, by which the city grows competition. He assumed that a city grows because of migration. Migrants invade the city are forced to live in the worst housing and do the worst jobs (which is in the zone of transition)as this is all that they can afford. However when they make enough money they move outwards seeking better homes in quieter areas and better jobs. Over a number of years the city would expand as people would filter out into the next zone. In this way higher residential areas will be occupied by different ethnic groups, and the cheaper housing in the inner city would be taken up by a second immigration group, possibly of a different ethnic origin.

One advantage of the Burgess model is that it was the first attempt to analyse the internal morphology of tons and to suggest a casual process.

The disadvantages of the Burgess model are that its clear cut boundaries make the model hard to say all cities follow this trend, because in practice zones gradually merge together. Also this model is based in Chicago in the early 1920’s and not all cities have experienced the history of rapid migration. Thirdly, within each zone there are often wide variations. For example, in the residential zones house types may vary from blocks of multi story council flats to large private detached houses. Finally, the model only considers ground-floor use and ignores the height of buildings and uses on other floors.

Hoyt developed his sector model as an extension of the Burgess centric zone model in 1939.

The zone in transition is located here because, the factories grew up around transport links, in order for the factory goods to be transported easily to and from the factory.

Hoyt’s model shows that Hoyt agreed with Burgess that high income groups can afford the ‘best’ housing and jobs leaving the poorer people to live in the least desirable areas, i.e. the zone of transition.

Hoyt argued that the sectors developed out in needles because some outlying areas had better transport access to the CBD than others. For example his model shows that high class residential grew up along suburban railway lines.

One advantage of this model is that it takes transport routes into consideration, which affects the most desirables sites people live in.

The disadvantages of this model include the fact that it was based on the study of rents and housing rather than on land as a whole. Secondly, there is variation within a sector. For example, in the medium class residential zone, the housing will include council flats as well as semi-detached housing.

Mann developed his model in 1965. It is based on 3 towns in the north of England: Huddersfield, Nottingham and Sheffield.

Mann’s looked at prevailing winds. He assumed that as the prevailing winds in the UK are from the southwest, and that the high class housing would be located in the south west of the city, whereas industries would be located in the northeast. This is because ‘modern’ housing was usually found away from the smog and factories because rich people did not want to be inhaling those toxic fumes, whereas poor people had no choice but to live in the poor quality housing near the factories, in the inner city.

One advantage of Mann’s model is that it actually looks at the UK cities, and takes into account climatic factors.

One disadvantage of Mann’s model is that it is based solely upon the south-westerly prevailing winds that England receives. However this is not he same in all countries, which makes this model difficult for other cities to be compared to.

To conclude, I believe that all the models are similar in that they all say that the CBD is where people do no live ,and is always located in the middle of a city. All 3 models say that poor people live in the inner city area as it is the least desirable area and contains the poorest housing. All the models say that wealthy people live in the more desirable part of the city as they can afford to do so.

One difference between the Burgess model and Mann’s is that local government played a role in slum clearance and gentrification. This led to large council estates which took the working/low incomes to the city edge. This is the opposite to Burgess model as the working class are situated in the inner city zone.

Another difference between the models is that the Burgess and Hoyt model are based upon American society whereas the Mann’s model is based upon England.

The advantage of urban models is that they at least can show us how one city might have been formed.

The disadvantage of urban models is that no one urban model can be used to demonstrate how all the cities in the world formed, look like now and will look like, as they are based upon generalisations. 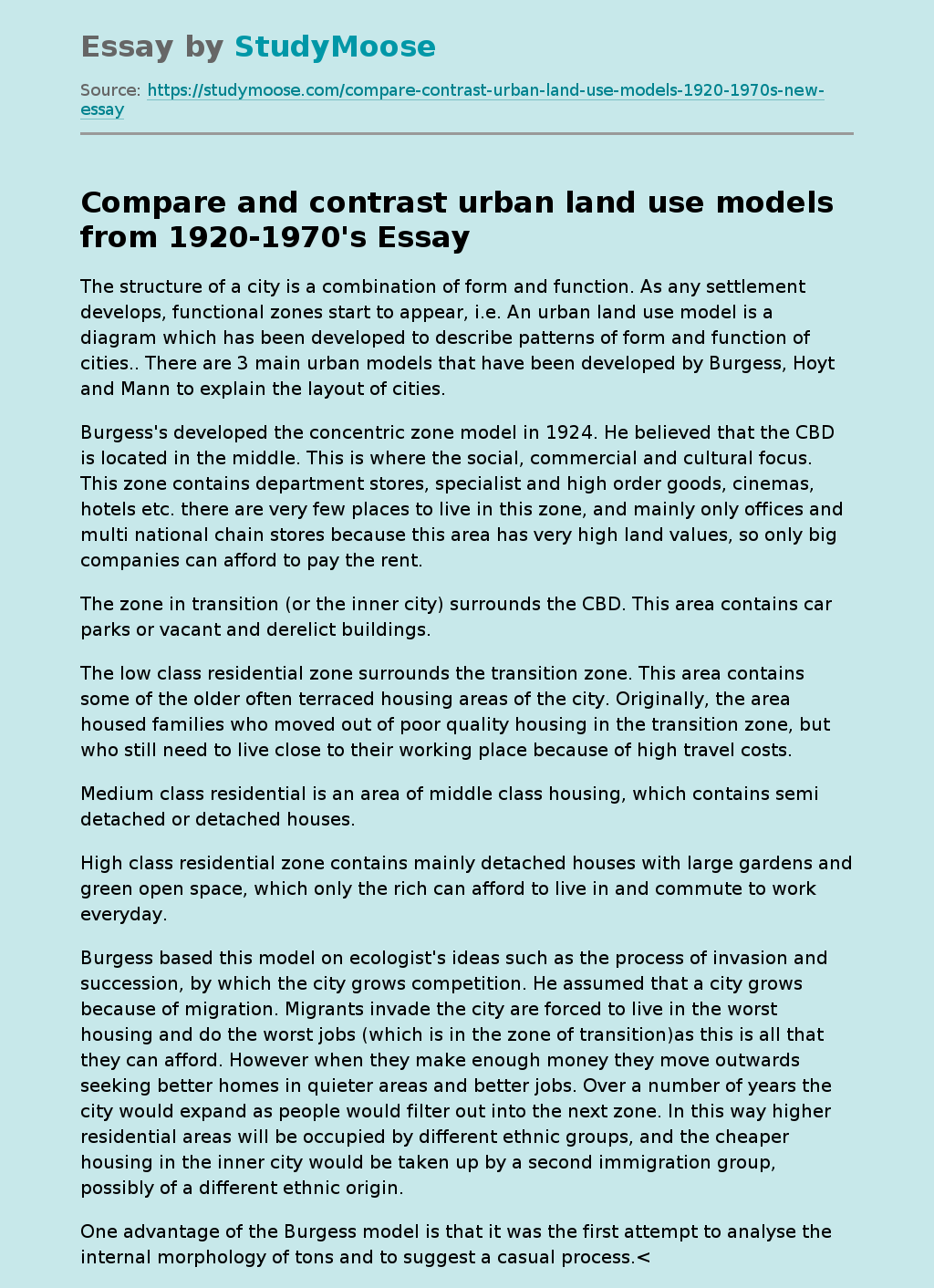