Communalism Arises Among the Society

Communalism arises among the society when a particular religious or sub-religious group tries to promote its own interests at the expense of others. In simple terms, it can be defined as to distinguish people on the basis of religion. Divide and Rule Policy of the British: The British rulers adopted the policy of ‘Divide and Rule’ to strengthen their roots while living in India.

They divided the people of various communities of India and spread the feeling of distrust among them and hence they sowed the seeds of communalism in India.

Political Organisations: Different communal organisations are found in India which have created hatred among the people of various religious communities by propagating, and hence they are the root cause of communalism. Inertia indifferent Government: When the government does not take proper action at the proper time, communalism spreads among the subjects.

Sometimes the government favours on the religion and leave others which create differences. Ineffective Handling of Communal Riots: Sometimes the state governments have been proved ineffective to curb the communal riots in their respective states.

It also results in spreading the communalism. As the result of the above factors, communalism is raising its ugly face in India after the Independence and also creating great problems even in the working of Indian political system.

Remedies: Efforts should be made by the enlightened citizens to discourage the communal and caste based forces from the social, political and electoral process in order to make these forces irrelevant. They are to be opposed not to be appeased.

. Communal carnage and caste wars should be dealt strictly with new strategies. . To usher an era of social equity and sarva dharma sambhava the people of India should not mix religion and caste with politics to attain the goal of common brotherhood for the unity and integrity of the nation.

Communalism Arises Among the Society. (2016, Oct 14). Retrieved from https://studymoose.com/communalism-essay 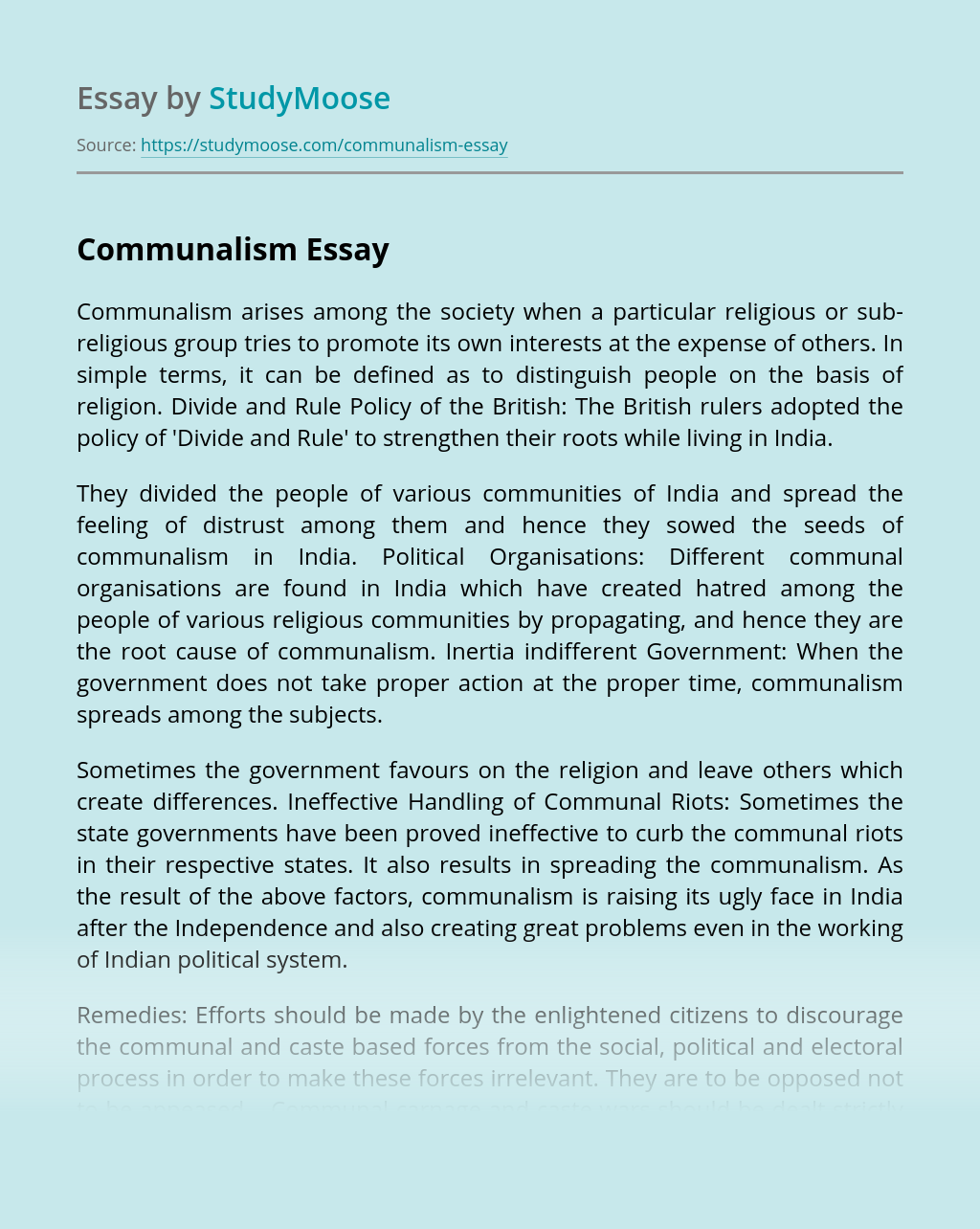 Untouchability is a form of discrimination, the social-religious practice of ostracizing a minority group by segregating them from the mainstream by social custom or legal mandate. It is a menace and social evil associated with traditional Hindu society. The term is used in India to talk about the public treatment of especially the Dalit communities,...

Caste, Society and Politics in India from the Eighteenth Century to the Modern Age, written by Susan Bayly and published by The New Cambridge History of India, is a book that attempts to explore the inception of ideas and practices that gave rise to the so-called caste-society. Holding a lectureship in history and social anthropology...

Functionalism focuses on what benefits the whole of society. Functionalists took a similar method as biologists to describe this perspective. Social systems were dissected into their parts, or organizations (family, education, economy, polity, and religious beliefs), and these parts were examined to discover how they worked and their value for the larger social system. The...

Role of Social Networking and Media in Political Awareness in Public

Felipe Landa Jocano is a Teacher Emeritus at the Asian Center of the University of the Philippines and Executive Director of PUNLAD Research Study Home, Inc. He has authored various books on various elements of Filipino Society and Culture. Frank Lynch is an anthropologist who concerned the Philippines and study Filipino worths and the acceptance...

As I roamed around the campus and interviewed people, asking questions with regard to automobiles, I realized that people from UP Baguio perceive things differently and diversely. Of all the answers that I gathered from different sectors of UP Baguio, from the students, faculties and even staffs this statement was the most strucking for me....