Common sense seems to dictate that conspiracy theories are nothing, but false claims created out of reaction to uncertainty. However, a shocking percentage of the society believes in at least one conspiracy theory. Conspiracy theories matter because they impact how the world thinks and how power shifts in hierarchy. In their recent works, Brian K. Pinaire, Robert Matthews, and Maggie Koerth-Baker have offered their insight on conspiracy theories and how the growth of these theories is correlated to the development of the Internet.

Don't use plagiarized sources. Get your custom essay on
“ Common Sense and Conspiracy Theories ”
Get custom paper
NEW! smart matching with writer

The authors are trying to make it evident that in the past information could not just be put on a platform and viewed by the world. Rather, information was passed by word of mouth, so it did not spread as quickly, and it was not so accessible. Pinaire suggest that false information publicized by the Internet has such an impact because people do not know it is false.

He believes that most people have trouble discerning whether their source on the Internet is reliable. Pinaire claims that “most websites and web logs lack the sorts of quality controls and external validation that are essential components of the traditional research process “(Pinaire, Pg.33). He argues that not only do people not know which sources on the web are reliable, but the Internet also does not have quality control to get rid of the unreliable sites. Overall, Pinaire highlights that the reason false information spreads so rapidly through the Internet is because people do not know what sources are reliable and the Internet offers all sources rather than having quality control that sorts out the unreliable ones.Matthews agrees that the Internet is the reason conspiracy theories spread rapidly but looks at conspiracies’ rapid growth through a modified lens.

Matthews claims that the false information the Internet offers spreads so rapidly because lies move faster than truth. Consider when Matthews says, “the web has ushered in an age of misinformation in which, as Mark Twain put it: ‘A lie will go round the world while truth is pulling its boots on.’ Except he didn’t. It was a Victorian preacher named CH Spurgeon. “(Matthews pg.1). Through this humor, Matthews displays how the Internet can deceive and tell the truth. He emphasizes on the irony that the quote is referring to false information moving quickly, and the Internet has wrongly given Mark Twain credit for this quote. Which proves CH Surgeon’s point that lies moves faster than truth, and Matthews’ point that the Internet fosters this idea by spreading lies and truth. By using this evidence to his advantage, Matthews, enlightens his audience on how easily people can be deceived by the Internet. Therefore, Matthews builds on Pinaire’s argument that the false information the internet offers spread rapidly because readers are unaware it is false.

All three authors also observe that the Internet not only offers false information but also factual information. Where they disagree however, is on how impactful this factual information is in combating conspiracy theories. Both Pinaire and Koerth-Baker argue that the facts the Internet offers are not an antidote to conspiracy. Pinaire accentuates that people do not know what is facts and what is nonsense. In addition, Koerth-Baker asserts that the facts do not combat the nonsense because people form confirmation bias. Koerth-Baker describes confirmation bias as, “the tendency to pay more attention to evidence that supports what you already believe” (Koerth-Baker pg.3). Koerth-Baker argues that people’s strong beliefs cannot be eliminated by facts, and that people will simply ignore the factual evidence that contradicts what they believe. Matthews rejects Pinaire and Koerth-Baker’s beliefs. He suggests that the Internet is “both the facilitator of nonsense and the antidote to it” (Matthews pg.1). Matthews claims that there are more websites debunking conspiracy theories and explaining why they are wrong than websites that are promoting conspiracy theories. While Matthews acknowledges Koerth-Baker’s claim that people can ignore the information that contradicts their world view, he indicates that because there are more facts than nonsense, facts are capable of overcoming confirmation bias. Therefore, the Internet’s factual evidence serves as an antidote to conspiracy theories.

Personally, I struggle with choosing reliable sources for my school projects and being a gullible person, I have a bad habit of believing everything I read online. As far as the effectiveness of factual information, I agree with Pinaire and Koerth-Baker that factual evidence offered by the Internet is not an antidote to conspiracy theories. I agree with their claims that people either do not know what is true or false, or they form confirmation bias that cannot be drowned in facts. From my personal perspective, the Internet encourages growth in conspiracy theories because it offers false information. This false information spreads rapidly because people are unaware it is false. Consequently, the factual evidence presented by the Internet does not combat belief in conspiracies because people form confirmation bias and are unable to determine the reliability of sources online. 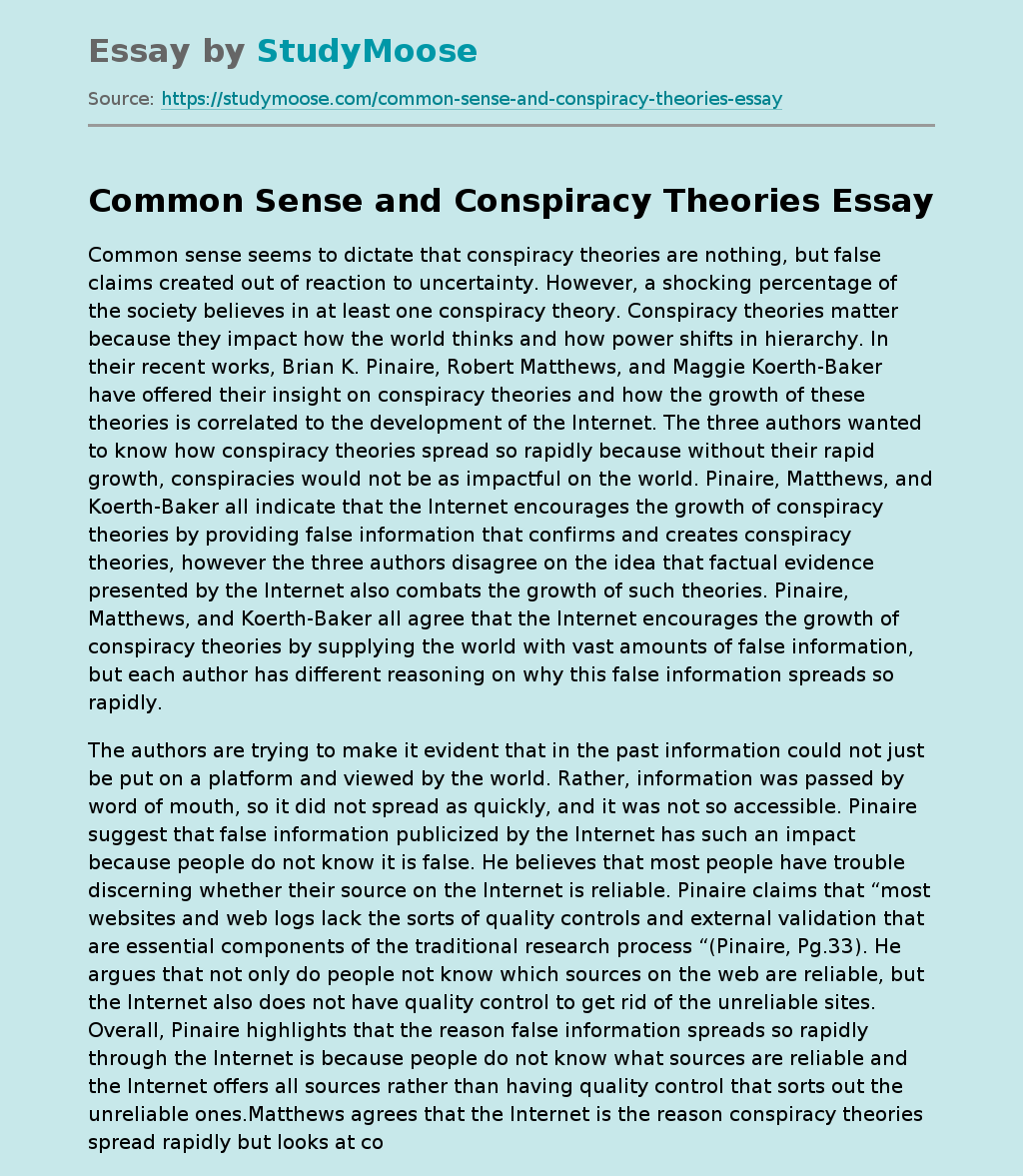