College is a waste of time and money

In Caroline Bird, “College is a waste of time and money,” Bird discusses why college is not necessary for everyone. She states that many college students are in college not because they want to but because they have to. Bird came to realize that college students don’t feel needed. They are led to believe that getting a college degree is important because it’s a way of getting higher chance of financial success which from Bird’s point of view is not always true.

Turn in your highest-quality paper
Get a qualified writer to help you with
“ College is a waste of time and money ”
Get high-quality paper
NEW! AI matching with writer

She gives examples of college students who have graduated and came to realize that college was a waste of time and money. Bird says that if students think that college is not good for them then they shouldn’t be expecting them to respond positively to it. She states that college that doesn’t really bring social equality. She points out that parents send their children to college thinking that they will have financial benefits from the education they get but Bird thinks that it is the worst investment.

Bird says that Americans are looking for a job where they “contribute”, “express themselves” and “use their special abilities,” and that colleges can help them find it.

She says that there are colleges don’t prepare their students for the job market. She states that college have of little impact on things and/or people. Bird came to a conclusion that college is not for everyone, there are those who like academic work and those who are drawn to be productive in another way other than that.

In “College is a waste of time and money,” Caroline Bird based her argument on a widely shared beliefs that many people have also discussed about which makes it convincing. She strengthens her arguments with strong examples of people or statistics that proves her point of view, people that have experienced college life and found out that it was a waste of time and money. Bird organized her argument in a sense where whatever she claimed, she gave solid proof that made her arguments even stronger. Her reasoning in this essay has logic, it clearly shows that she thought about it and did some research to make her arguments.

This makes her essay have more meaning and the targeted audience be convinced of the point she is trying to make. Even though this essay is based on events that happened in the 70’s, the same issue is still there. Caroline Bird started off her essay by pointing out that college is something that people have to do not because they want to but because it’s a way of getting support without getting a job. She goes on by saying that it’s “a prison that keeps them out of the mainstream economic life for a few more years”. Some students find college as a way of being free and independent from difficult home conditions without losing the financial support of their parents which is true and is still current. A lot of students think that if they get in college, they will be free to make their own decision with or without the parent’s approval and still be financial supported. But with all that Caroline Bird proved that even if they think so, they end up not liking the experience because according to Sol Linowitz, “they are there to get the ‘ticket to the big show’ rather than to spend years as productively as they otherwise could.”

The students felt like they are not wanted in the society; that the society doesn’t know what to do with them which makes the students unhappy. Parents send their children to college thinking that it will financially beneficial after the years of high education but actually it was proven college is not always a successful investment and there is no actual evidence that there is a high income coming from the college graduates. Bird stated that the college money can be invested in something that has a higher income than a college diploma and she gave an example of a Princeton high school graduate who liked fooling around with cars could have saved his $34,181 and worked at a garage and learn auto mechanic. When he is 28, he would have earned $73,113 which is enough to get his own car dealership and that is expected to be more than a college graduate.

Christopher Jencks, the author of Inequality, realized that men from high-status families have a higher income than men from low-status families even when they have the same occupation, same education. He also said that being financially success is all about being lucky. Bird also mentions that college attracts people have high IQs who are meant to be financially successful, who have a good family background. This brings to her point of colleges not bringing equality by putting them all in a four year degree. She says it’s a way to narrow the gap between high and low society and it is selective. Young people now go to college hoping they can be trained for jobs that they will contribute, where they will be able to express themselves and use their “special abilities”.

As Bird said, colleges fail to prepare the students for the job market. Bird also pointed out that she talked to teachers, engineers and others and they told her that they hardly use what they were taught in school. Bird also talk about former college graduate who actually agree with her point. She uses as an example a graduate from Mount Holyoke who said: “when I got out I made up my mind that I wasn’t going to school anymore because so many of my courses had been bullshit,” and one of the students Leon Lefkowitz, chairman of the department of social studies at Central High School in Valley Stream, said that he can honestly say that it was a waste of his father’s bread.

She also talks about a sociologist who said college is an institution and his definition is an arrangement everyone accepts without question, the burden of proof is not on why you go, but why anyone thinks there might be a reason for not going. People say that 18 year olds are too young to decide what they want to do in life and are confused so they should go to college. The sociologist disagree with that saying that college has to be judged not on what people think is good for students, but on how it feels to the students. Caroline Bird’s essay, “College is a waste of time and money” is convincing because she used logic and gave solid proof to support her arguments. The fact that she wrote her essay in the 1970s and the issue is still being discussed upon up until makes her arguments more valid and strong which is may appear convincing to the targeted audience.

College is a waste of time and money. (2016, Sep 18). Retrieved from https://studymoose.com/college-is-a-waste-of-time-and-money-2-essay 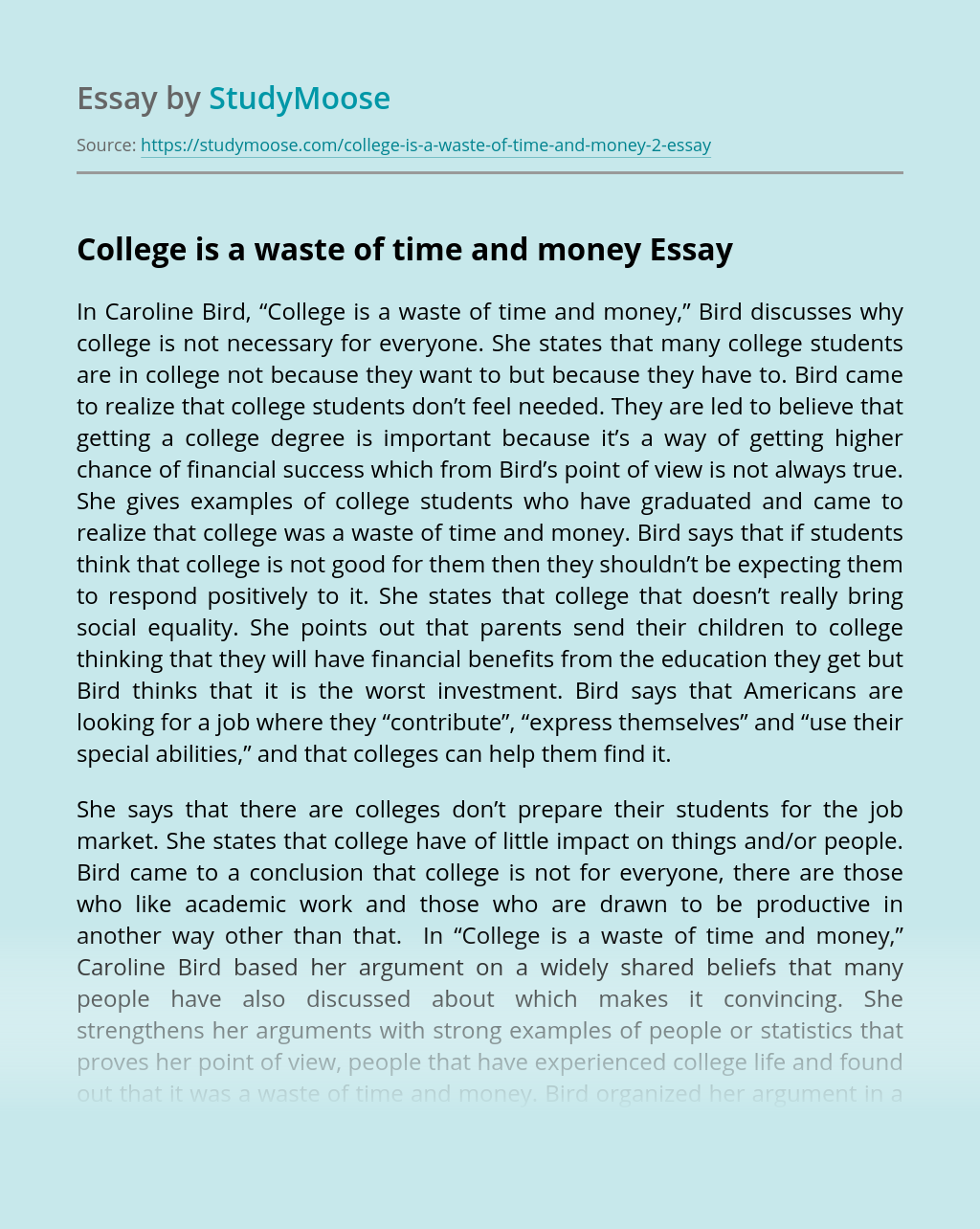 Turn in your highest-quality paper
Get a qualified writer to help you with
“ College is a waste of time and money ”
Get high-quality paper
Helping students since 2015
Stay Safe, Stay Original