Tim Burton uses many cinematic techniques in his movies such as lighting and camera angles throughout his movies in order to create effects and moods. He uses these two cinematic techniques numerous of times in the films Edward Scissorhands and in Charlie and the Chocolate Factory. He uses them very efficiently to portray different ideas such as showing strengths, weakness, or size in character or setting, or revealing a depressing or cheerful surrounding. Tim Burton is a successful film maker and has inspired many to get into the movie making business due to his cinematic techniques.

Don't use plagiarized sources.
Get Your Custom Essay on Cinematic techniques in Tim Burton’s Films Just from $13,9/Page

In many of Burton’s films, Burton uses lighting to show happiness or sadness. In Edward Scissorhands, peg’s town is bright and full of color. Which makes it seems like the town is happy and full of joy, but the townsfolk are cruel and mean to one another.

Edwards’s mansion is low key and dark, which makes it seems like Edward is the bad guy, but Edward is a kind, nice guy who loves to help everyone even though he has a disability.

Burton also uses the same low key lighting in Charlie and the Chocolate Factory. When Charlie goes home at the beginning of the movie, Burton uses high angle to show Charlie’s house all dark, making it look small and haunted. The lighting would want you to think that the family that lives in that house is mean or sad all the time, but Charlie lives with his mom and dad and his grandparents on his mom and dad’s side. And they are all nice, kind, and respectful to one another.

You see, this is Burton’s gothic style. Burton is mostly known for his dark, gothic, macabre, and quirky horror and fantasy films. So this cinematic technique has great importance for these films because he used it to make his idea or his opinion become clearer for the audience to understand the lesson from the movie. Burton’s lighting basically impacts the audience’s mood towards the movie or film. Burton wants to see the films in his eyes. Camera angles were very important in the films Edward Scissorhands and Charlie and the Chocolate Factory. 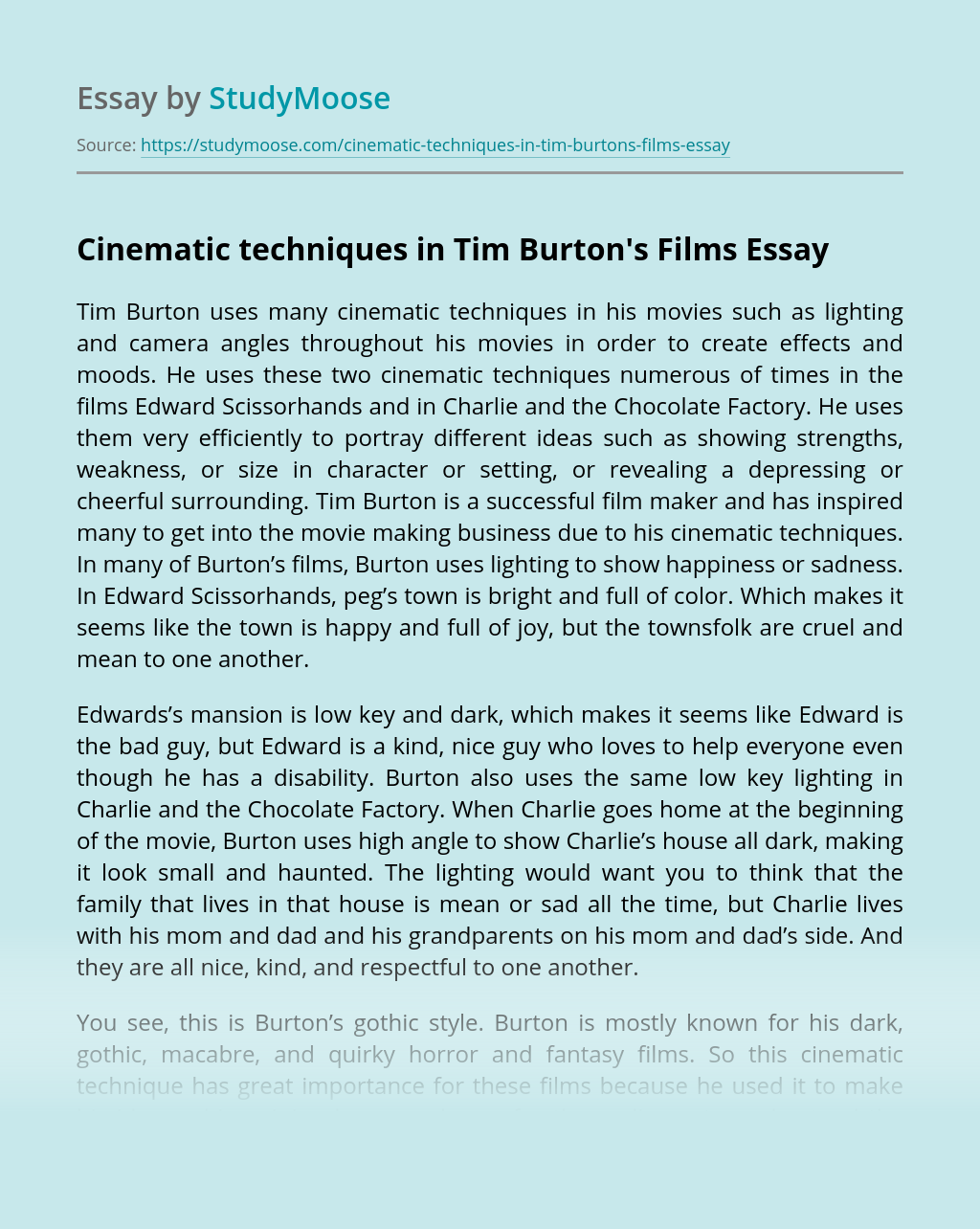 Analyse how visual techniques are used to establish deeper concepts in a visual text you have studied. The film “Truman Show” directed by Peter Dam is about a character named Truman Burbank and his impressive journey in getting away a world filled with deceit and lies and finding personal freedom. His journey assists provide the...

“We must change what we want to see.” In James Cameron’s “Avatar,” we see Jake Sully—the protagonist—fighting in the imperialistic battle between the Na’vi: the natives and the Sky People: the greedy humans. Jake is important because he shows the audience the importance of where to put your loyalty and how much it can change...

Primal Fear (1996) is a film adaptation of William Diehl’s novel; it is a story about an altar boy portrayed by Edward Norton who is allegedly accused with murder of a city archbishop. Richard Gere was the defense attorney who holds his case. Martin Vail (Gere) is a well-known defense attorney in Chicago who seizes...

Out in a middle of nowhere, a man rides a horse in haste as if it were chasing after something. This is the common image of the cowboy that we have all become familiar with. In fact, it is next to impossible not to recognize the image of the cowboy because it is so powerful...