Chromatography and its Types Explanation

The students plugged the column with cotton and silica gel inside the pasture pipette which later introduce the extract and eluent inside.

Don't use plagiarized sources. Get your custom essay on
“ Chromatography and its Types Explanation ”
Get custom paper
NEW! smart matching with writer

INTRODUCTION
Chromatography can be explained as the separation of mixture into different fractions by disseminating into different phases, one being stationary and the other mobile.

Siling labuyo or chili pepper (CApsicum Frutescens) is common backyard plant in the Philippines especially in the province. It grows about 0.8-1.5 meters in height. Fruit is commonly red when ripe, oblong-lanceolate, 1.5 to 2.5 centimeters long.

The group removed the seeds of five siling labuyo by cutting it on sagittal portion. Afterwards, the siling labuyo was triturated until orange liquid is visible. Upon extraction of the pigments, five milliliter of dichloromethane was used; then, extracts was set aside for thin layer chromatography. To prepare the column chromatography, Pasteur pipette was plug with cotton and uniformly packed with silica gel up to the indented part. On top of the column, 0.5 milliliter of extract was placed. Then, the extract was added with eluent of 10 milliliters of dichloromethane -hexane(1:1).

The solvent system for siling labuyo was 3 milliliter of dichloromethane-hexane and dichloromethane. The column was not allowed to dry. The eluate was collected and separated in terms of color. Colored eluate was given more importance while colorless was discarded. Also, the number of drops of colored eluate from the column was noted. A 5 centimeter by 8 centimeter precoated thin layer chromatography plate was marked 1 centimeter at each top and bottom part. On the bottom part, 0.5 centimeter from the edge was measured towards the center to apply the spots of the eluate.

Each spots were dried and as small as possible. Fifteen milliliters of dichloromethane hexane was used in preparing the developing chamber for red siling labuyo. The inner wall of the chamber was lined with filter paper, covered with watch glass and allowed to equilibrate. Afterwards, plate was placed inside the developing chamber to allow the solvent system to rise up to 1 centimeter from the upper end. If the solvent system reached 1 centimeter from the upper end, the plate was removed and immediately marked the solvent front. Also, the components was visualized under ultraviolet lamp and measure the retention factor. RESULTS

DISCUSSION
As seen in Table 1-1, there are light yellow, orange and colorless eluate was collected. There are 43 drops of light yellow and 36 drops of orange. Colorless eluate is not included in the data gathering because it is not part of the components of extraction of red siling labuyo. Only dichloromethane-hexane and dichloromethane eluent was used because the components of siling labuyo already flowed out of the column before the dichloromethane-methanol was added. The eluent affects the flow of the compounds whether they will remain in the column or out of the column. Light yellow and orange pigment tend to move along with the solvent. Orange component is more polar than light yellow because orange have the tendency not to travel quickly and absorbs more strongly by silica. I Figure 1 shows the set-up of the chamber for the thin layer chromatography.

The beaker is covered with watch glass so that the atmosphere remains saturated with solvent vapour. Saturation of atmosphere is important because it hinders the evaporation leading to the rising up to the plate. There is a separation of components of siling labuyo at different rates. In Table 2, it shows the amount of distance travelled by each component. Orange component shows that it remains in the stationary phase while light yellow component moves closely to the mobile phase. In Figure 2, it shows that two spots were floresce under ultraviolet light which means it is the final chromatogram.

Chromatography and its Types Explanation. (2016, Apr 19). Retrieved from https://studymoose.com/chromatography-and-its-types-explanation-essay 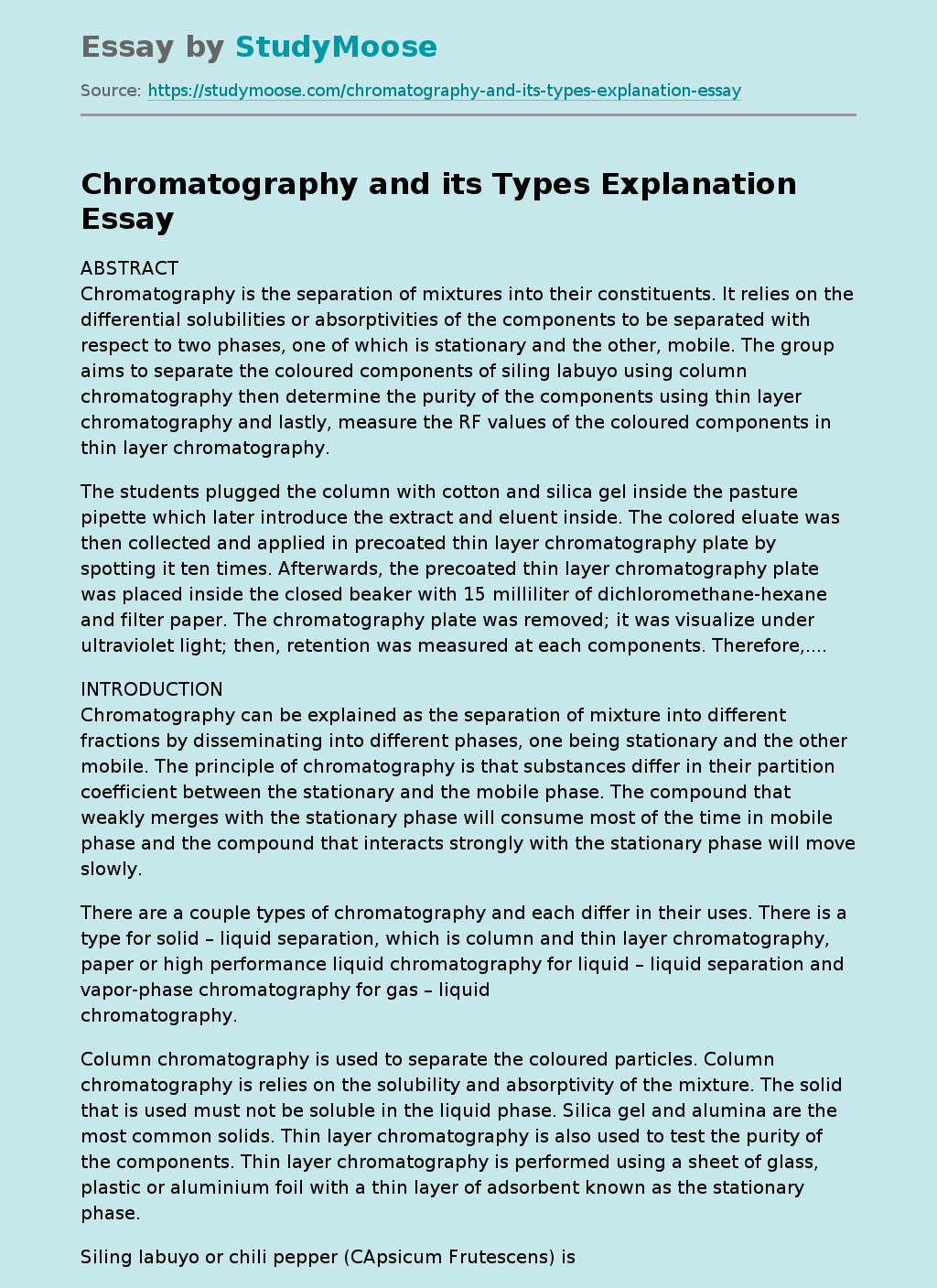