Christianity and Islam: Merchants and Trade

From Christianity and Islam’s origins to 1500, the attitudes of both toward trade shifted as conditions in the Christians and Islams world changed. With Christianity, their attitudes were more negative while Muslims were more respectable for merchants and trade. Later, their attitudes swapped and now this reflects on how the importance of trade has changed. Christianity and Islam’s attitude were changed due to the influence of how they treated trade and merchants differently and similarily. Overall, their views on merchants and trade were different and similar mostly because of the different backgrounds each religion has.

Don't use plagiarized sources. Get your custom essay on
“ Christianity and Islam: Merchants and Trade ”
Get custom paper
NEW! smart matching with writer

From both of Christiany and Islams origins, they both have very similar views on merchants and trade. In document 1, the excerpt can be explained as a bias statement when discussing on what it means for a rich man to enter the presence of god, which is nearly impossible. The purpose of this source is to demonstrate that although it may be good to have wealth, it shouldn’t be a person’s number one priority, including one’s chances into getting into the kingdom of heaven.

Document 2 discusses a writing from the Qur’an that looks at the aspects of wealth, trade, commerce, and merchants.

The Qur’an discusses how having wealth is good as long as it is done in a lawful way. In other words, as long as wealth is dealt in a holy way, then it is considered a blessing. Overall, the major similarity discussed in both documents 1 and 2 is that wealth is fine as long as it doesn’t consume you or you handle wealth in an unlawfully way.

Although there were may similarities between Christianity and Islam’s views on trade and merchants, there were also some differences as well.

Christianity and Islam: Merchants and Trade. (2016, May 19). Retrieved from https://studymoose.com/christianity-and-islam-merchants-and-trade-essay 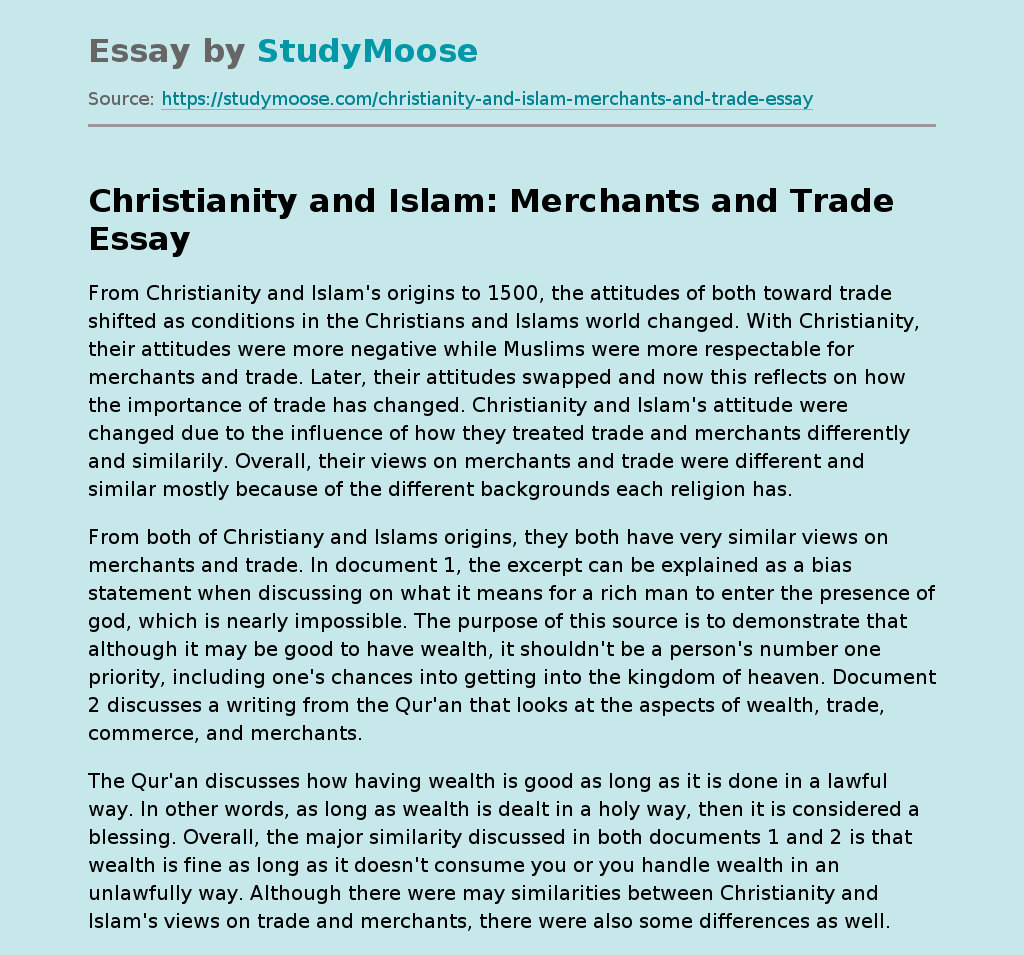