The Montessori Method of Education

The Montessori method of education is one of the very unusual approaches of educating young children that has been based on the experiences and research of educator and physician Maria Montessori (1870–1952). The method basically arose from what Dr. Montessori’s discovered and named it the “the child’s normal nature” back in 1907 (Montessori, 1972). This happened during one of her experimental observations with young children who had been given the freedom they need d in an environment that was fully prepared with all the materials and was specifically designed to support their self-directed learning experiences (Montessori, 1977).

Don't use plagiarized sources.
Get Your Custom Essay on The Montessori Method of Education Just from $13,9/Page

A child’s development of will has been regarded as one of the laws of development as per Montessori’s observations. She herself has clearly indicated how she observed this development of a child’s will. When a child does any action just by himself, without having any form of assistance, this clearly signifies the fact the child is consciously making decisions.

In this regard therefore, the will should be treated as a form of strength that mainly comes to the light of consciousness (Montessori, 1972). Will however is not a strength that is possessed by the child at birth; it is rather in potential. It is one of the slow processes of development that is brought into effect through continuous interactions within the surrounding environment. Since it is the nature that brings into consciousness this kind of force, the development of a child’s will helps him to greatly develop the power that he has been given by nature (Montessori, 1988).

According to Montessori, this happens to be the key that opens the necessary mechanisms involved in true education. This law states that intelligence just helps a child to better understand life; it thus prepares a child for future education (Montessori, 1977). The Montessori thus argued that if the environment was well prepared, this would greatly help the child to interact effectively with his environment and to construct his mind. Intellectual development is important as it helps a child to know as well as explore the environment. Through the developing senses, a child is endowed with the necessary mechanism of interacting with the environment (Montessori, 1972).

Maria Montessori early on in the 20th century had the intuition that even before a child is of age 3, various functions in that child are constantly being created in a psychic process and only after 3 that they develop. Montessori thus strongly believed that it is the natural laws that govern the development of any child. She thus assumed that as a child hits three years old, all of the unconscious preparation needed for future activity and development has already been established. One of the child’s unconscious goals is the development of mental functions. It should however be noted that these kind of natural laws which basically govern the psychic growth of the child are revealed through his developmental process (Montessori, 1972).

Maria Montessori was able to discover just by observing children the phenomenon of what she called sensitive periods of an absorbent mind as well as natural laws that governs the physic development of children.

With this kind of realization, Montessori was determined to see that the education system gained a new goal: and this is to make sure that the child was assisted by the teachers and directors to turn out into a human being that he or she was created to be (Montessori, 1972). She argued that, the only way to be bale to help a child is if we know the Nature of the child, since then we are in a good position to help him to fully develop all of his inner powers so that he can grow from being a helpless creature into a responsible mature citizen. This approach by Montessori thus values the believe that a child’s main goal since birth is to just but develop all of his potentials according to a certain physic pattern that he does possess even before his birth (Montessori, 1977).

In real practice, Montessori method has only been applied with some kind of varying degrees of strict adherence to the main philosophies, though it is generally agreed that they all somehow subscribe to some of her writings (Polk and Montessori, 1988). The result has been that there are some people who strictly adhere to either one of these philosophies, while there have been another group that have seen it wise to develop a unique concepts all based on interpretation of her philosophies and writings. There are thus several concepts that are now widely accepted by several practitioners and which are said to be consistent with the teachings of Montessori method. These concepts have been developed from different laws (Montessori, 1972).

The application of this method requires that the teacher views the child as a being having a kind of inner natural inherent guidance for her or his own self-directed development which in reality is the only perfect method according to Montessori (Montessori, 1988). The major role of the director, teacher, directress, or guide is basically therefore to watch over the child’s environment and make sure that it has no obstacles that might interfere with the natural and perfect development of the child (Montessori, 1977). Part of the role of the teacher might also include experimental interactions with the children under his or her care, and this is what Montessori referrers to as “lessons,” with the aim of resolving wrong behavior or maybe to demonstrate to the children how they are supposed to make use of the self-teaching materials (Montessori, 1972).

Due to the child’s unique sensitivity and instincts to various conditions in the environment, this method has only been recommended to be applied to young children (2-6). Though this be the case, the method has in some instances also been applied to elementary age (6–12) school going children and at other times with toddlers and infants. Though with less frequency, the method is also applicable to high and middle school level students (Montessori, 1977).

To be able to develop themselves fully, children need a special inner tutor which Montessori referred to as absorbent mind and sensitive period. The natural laws that govern the child normal psychic developments are revealed during his development. This philosophy by Montessori Method has however remained confused and obscure since many claim that her 1907 discovery was purely accidental. The result of the criticism and questioning of her method has resulted to Montessori philosophies and organizations expanding considerably with three main philosophies thus developing.

The Montessori Method of Education. (2016, Sep 28). Retrieved from https://studymoose.com/child-development-5-essay 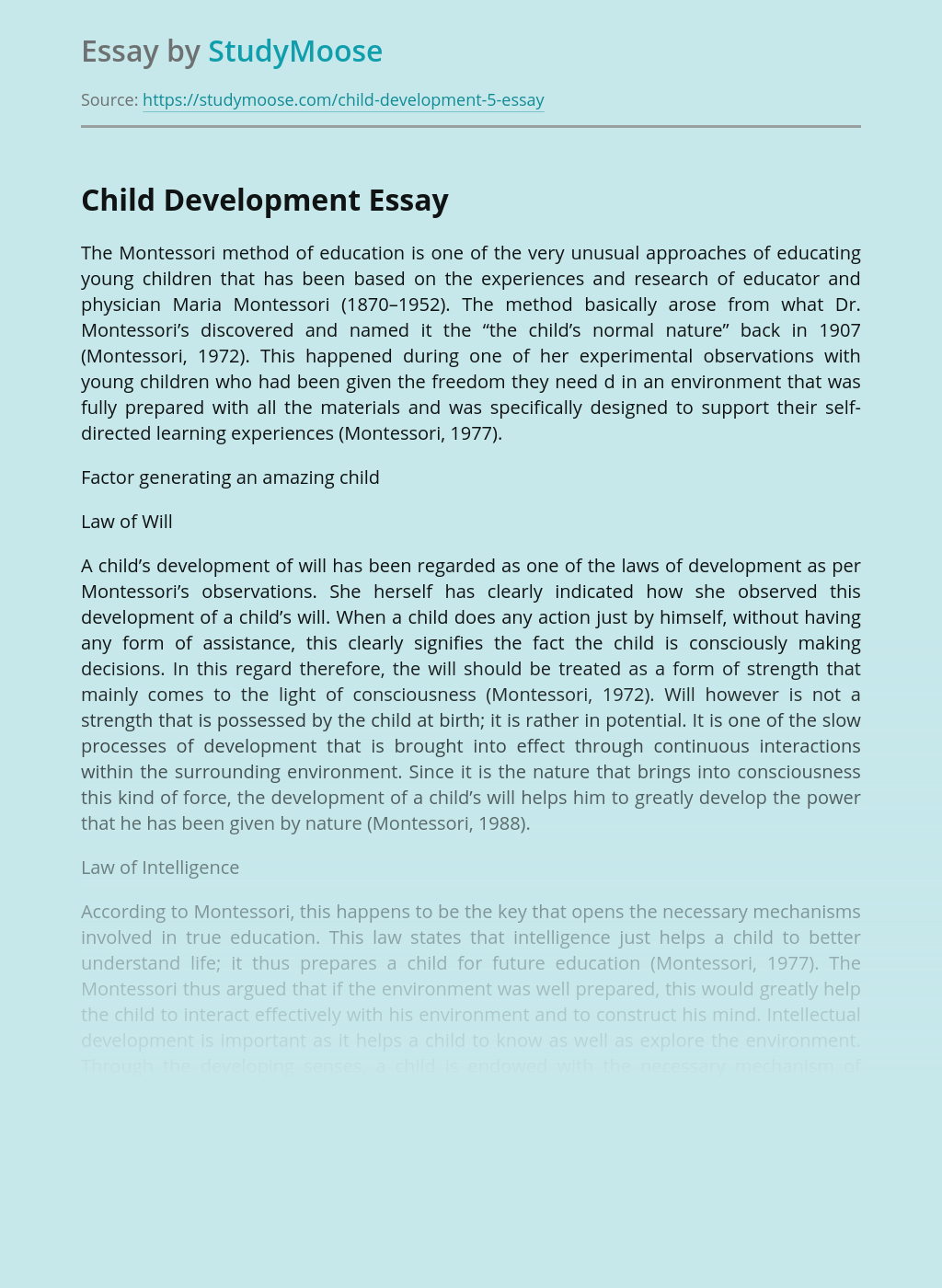 Globalization and Environmental Effects on our planet

Rate this post Globalization and the Environmental Effects on our Planet We live on a very fortunate planet that allows the human race to not only survive on it, but also to thrive in its consistent temperatures, natural resources, and prosperous ecosystem. But the effects of globalization, pollution, global warming and other environmental problems threaten...

Well-Rounded Individual: How to Become One

Rate this post If we are going to define the standard of the word “well- rounded” and attach this to a person we can create a picture of an individual that has fully developed abilities and qualities to excel in various fields hence earned great success or attainments in his endeavors. In other words this...

Get Essay
The Essence of Love

Rate this post The essence of love is an eternally controversial topic, the opinions of which vary from person to person. Some don’t have sufficient faith in pure-love, on the contrary, others are firmly convinced that love is unconditional. From my perspective, love is as immaculate as snow that people yearn for, however to some...

Rate this post S1-What news does Balthasar bring Romeo? Balthasar arrives in Mantua and tells Romeo that Juliet is dead. S1-What does Romeo mean when he says, “Then I defy you, stars!”? This statement refers to fate. He is going to “tempt fate” by returning to Verona where he has been banished from. His goal...

The Importance of Islamic Economic