Mixtures are made up of substances or components. If the mixture is fairly uniform in composition, properties, and its overall appearance, it is homogenous. If the component parts are clearly separated, it is heterogeneous. In order to identify the components in a mixture, methods must be used to sort out the components. However, the same methods will not work for sorting all substances. Four different processes would be employed to sort soluble and insoluble components in the following experiment. Introduction

Matter that people encounter in everyday life consists of mixtures of different substances.

Mixtures are combinations of two or more substances in which each substance retains its own chemical identity and therefore the original properties are maintained. The substances making up a mixture are called its components. According to our General Chemistry book, there are two types of mixtures; homogeneous and heterogeneous. Homogeneous mixtures are those that are uniform in composition, properties, and appearance throughout. Heterogeneous mixtures do not have the same composition, properties and appearance.

The components of mixtures are always pure substances, either compounds or elements and each pure substance will possess a unique set of properties. Similarly, every crystal of a pure substance melts at a specific temperature and a given pressure, and every
pure substance boils at a specific temperature and a given pressure. There are four different methods of separation depending upon differences in physical properties. They are decantation, filtration, extraction, sublimation. In decantation, a liquid is separated from a solid by gently pouring the liquid from the solid so the only the solid remains in the container. Filtration is the process of separating a solid from a liquid by using a porous substance (a filter). Filtration allows the liquid but not the solid to pass through, again, leaving behind the insoluble substance. Extraction separates a substance from a mixture by choosing to dissolve that substance in a suitable solvent (usually water). Sublimation happens when a solid passes directly to the gaseous state and back to the solid state without passing through the intermediary liquid state. Material and Methods

Discussion
The first step in the experiment required using the oven to heat the mixture, with ammonium chloride, sodium chloride, and silicon dioxide in the evaporating dish, until “white fumes were no longer form[ed],” according to the lab description. The goal was to sublimate the ammonium chloride, as it is not water soluble. It took about fifteen minutes to sublimate the NH4Cl. The dish had to cool as well when it came out of the oven. The mass of the dish contents were weighed and subtracted from the mass off the starting mass of the dish and the original mixture. The result was the loss of NH4Cl. Errors could have resulted from incorrectly weighing the original and ending samples. If ample time was not given to the sublimating process, NH4Cl may not have completely left the dish, the weight would not just include the mass of the other two substances. The next stage required careful decantation and stirring to remove only the liquid into a separate dish. The goal was to leave behind the insoluble substance, sand, and pour off the soluble NaCl. It was possible to accidentally remove particles of sand into the solution, which would influence the mass calculation of the two dishes. If stirring was not rigorous enough and water was not repeatedly added to sort out the sand from the liquid, there was a potential for sand staying behind as well. The final stage was to use the heating unit to evaporate the water from the solution to leave behind NaCl. At the same time, the heating unit was used to dry the sodium chloride in another dish. A calculation was made between the mass of the empty evaporating dish and the watch glass to reveal the mass of NaCl. Errors at this stage probably
resulted from inaccurate readings on the scale or not drying the samples completely. The final stage of the experiment was to isolate the sand and calculate its mass. By this late stage, any errors in measurement, timing and calculations would have trickled down to the final remaining substance. The percentage of accuracy of the three components in the experiment should total 99%. If the percentage was less than that, “you have been sloppy” according to the lab manual. Conclusion

In this experiment, it became apparent that what appears to be a simple mixture of elements is really more complicated. Heterogeneous mixtures may appear to be random collections of single substances, but when they are sorted into their components, the homogeneous elements can be observed. This was the case with this experiment. The original mixture had three substances: NaCl, NH4Cl, and SiO2. By using four methods, decantation, filtration, extraction, and sublimation, the separate components in the mixture could be isolated and weighed. If proper techniques in weighing, and using the four methods of sorting were observed and applied, the result would be three separated substances and calculations that matched those substances. The final calculation confirmed that our three substances, when sorted out, would all combine to weigh something close to the original mixture. The margin of error was within 2% 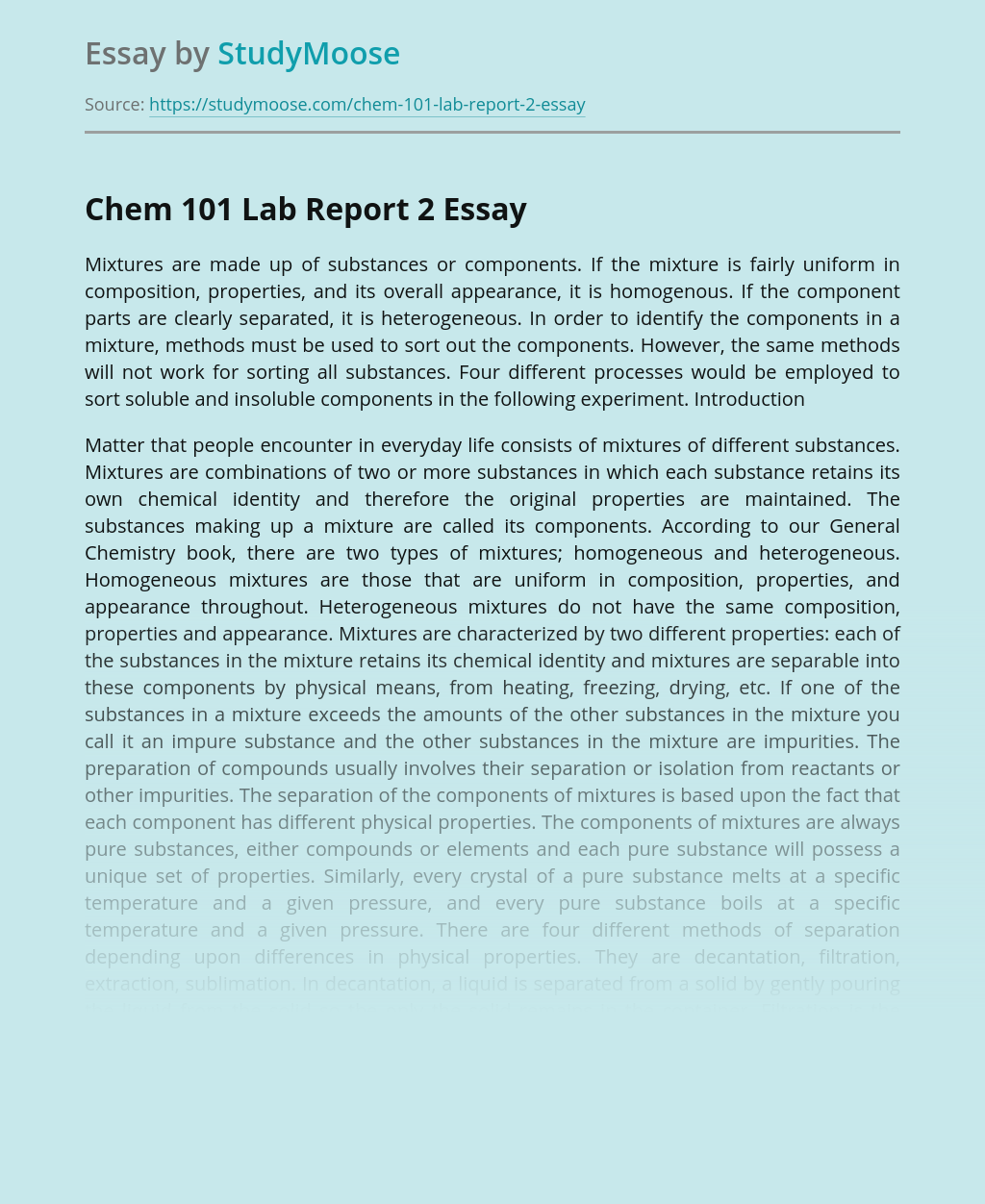