Characteristics for good governance in Afghanistan

Good governance is perhaps the single and most important factor in eradicating poverty and promoting development. The terms “governance” and “good governance” are now fully part of the language of development whereas bad governance is broadly recognized as a root cause of poverty, good governance is often seen as a way to cure all social and political and economic ills. Donors and companies are increasingly basing their aid and investments on countries based on governance conditions or plans for reform. Some equate governance failure with global trends such as climate change or the youth bulge as a force are able to rapidly undo development efforts, whereas governance success has the potentiality to quickly leverage and sustain development gains.

Don't use plagiarized sources. Get your custom essay on
“ Characteristics for good governance in Afghanistan ”
Get custom paper
NEW! smart matching with writer

Governance is thus a central part of the development landscape. Governance is also a powerful component of integrated programming for Mercy Corps and many non-governmental organizations (NGOs). Since, at its core, governance is about decision-making and the process by which decisions are implemented, its influence cross-cuts all sectors and locations of relief and development programming.

Mercy Corps believes that each country needs to decide its own economic and social priorities with leadership from government, in partnership with and accountable to the people who live in the country. Good governance brings the informed will of the people into governments’ decision-making. In this way, good governance is not an end in itself, but rather a means to building and sustaining secure, productive and just communities

Characteristics for good governance in Afghanistan
Afghanistan is going through a transition period which involves the transfer of security responsibilities from international troops to Afghan authorities.

At the same time it is being considered that transition of security arrangements alone would not solve the issues in Afghanistan. Rather the overall scenario has to go through a transition. The country has to seek a suitable reconciliation process and above all the Afghan political system has to go through a process of change so as to make it able to govern its people properly. There have been controversies regarding Afghan government and its capacity to deal with the challenges within the country. In fact, it has been observed that Afghan government has not been able to provide rudimentary requirements of life to majority of its people and have not been able to seek appropriate solution to various political problems that influence the system to a great extent. There has been a label of corruption and many, both in national and international circles, do not believe that it has the potential to achieve ‘good governance’.

Though the international community has, on various occasions, emphasized that their support is conditioned on the basis of good governance yet there has not been major steps taken by Afghan government to make achievements in this regard. A decade of support and assistance seems to have gone in vain and the country still suffers from myriads of problems. The capacity of good governance is judged by its potential to offer the basic requirements of life to the people easily and readily. Moreover, it must strive to raise the standard of living of the masses. Government stands as one of the most important actors in good governance. It is the government that decides whether good governance is achieved or not. There are certain important characteristics that must be achieved so as to establish it. Good governance has to be participatory, consensus oriented, accountable, transparent, responsive, effective and efficient, equitable and inclusive and follows the rule of law. Good governance strives that there should be participation of all the important groups of the society within the decision making process and must involve both men and women. Participation could be either direct or through legitimate intermediates institutions or representatives.

It is important to point out that representative democracy does not necessarily mean that the concerns of the most vulnerable in society would be taken into consideration in decision making. Participation needs to be informed and organized. This means freedom of association and expression on the one hand and an organized civil society on the other hand. Unfortunately, in our country Afghanistan the decision making is not carried out through proper participation of the representatives of the people. In fact, the decision making process is very much centralized. An important characteristic of good governance is that it is consensus oriented. There are several actors and different opinions in a given society. Good governance requires mediation of the different interests in society to reach a broad consensus in society on what is in the best interest of the whole community and how this can be achieved. It also requires a broad and long-term perspective on what is needed for sustainable human development and how to achieve the goals of such development. This can only result from an understanding of the historical, cultural and social contexts of a given society or community. Afghan government has not been able to develop a strong consensus and the ruling class does not seem much bothered about any sort of consensus. Accountability is a key requirement of good governance.

Not only governmental institutions but also the private sector and civil society organizations must be accountable to the public and to their institutional stakeholders. Afghan government, on the other hand, has been formed in such a way that it is difficult to hold the Presidential Office accountable for its policies and actions. It can do whatever it wants without standing accountable to its people. As a matter of fact accountability can be achieved when there is transparency and the rule of law. However, both these characteristics seem to be non-existent in Afghan society. Transparency and rule of law can be maintained when there is proper separation of power and the different organs of state can function on their own independently. In fact, judiciary and law enforcement agencies must be capable to hold the law as the top priority matter. In Afghan political system the separation of powers is not clear and the judiciary is composed of what the Presidential Office decides. Moreover, the powerful and the rich are mostly considered above the law and the poor and weak have to go through the ‘quagmire of law and order system’. Good governance requires that institutions and processes try to serve all stakeholders within a reasonable timeframe.

It means that it should be responsive. In the same way it should also ensure equity and inclusiveness. A society’s wellbeing depends on ensuring that all its members feel that they have a stake in it and do not feel excluded from the mainstream of society. This requires all groups, but particularly the most vulnerable, have opportunities to improve or maintain their wellbeing but what Afghan government has to offer us is the negligence of the most vulnerable. The minority groups in fact suffer from lack of proper participation in decision making and they find their existence threatened within the society. Good governance also means that processes and institutions produce results that meet the needs of society while making the best of resources at their disposal. The concept of efficiency in the context of good governance also covers the sustainable use of natural resources and the protection of environment. It is correct that all the characteristics mentioned above cannot be achieved by a government or a society as they portray what an ideal governance must hold, but it is also true that there are many nations in the world that, to a satisfying extent, have achieved most of them. Therefore, Afghan government has to strive to achieve these characteristics if it really wants to achieve ‘good governance’ and wants to serve its people in a better way. Conclusion

Good governance is perhaps the single and most important factor in eradicating poverty and promoting development. Good governance is often seen as a way to cure all social and political and economic ills. Donors and companies are increasingly basing their aid and investments on countries based on governance conditions or plans for reform. The capacity of good governance is judged by its potential to offer the basic requirements of life to the people easily and readily. Moreover, it must strive to raise the standard of living of the masses. Government stands as one of the most important actors in good governance To conclude; the good characteristics for Afghanistan government are:

1. Delivery of basic services to its people
2. Defending and protecting national interest and lives of its people.
3. Implementation of law and protecting its sovereignty.
4. Monitoring and implementing of law and the three branches of government as Judiciary, Executive, Legislature
5. Effective and adequate organizations and departments headed by right persons, decision making and implementing etc. .
6. Participation between government and public.
7. Prevention and fight against corruption and social injustice.
8. Good relations with neighboring countries like IRAN, Pakistan
9. Accountability to the public and heard the voice of vulnerable in country.
10. Government should prepare the ground for domestic and foreign investors.
11. Tasks based on meritocracy
12. Fight against discrimination which still exists and plays a vital role in our country.
13. Improve of economy and decrease unemployment, poverty level.
14. Control and monitor the monetary policy in country by central bank of Afghanistan.

Characteristics for good governance in Afghanistan. (2016, Apr 07). Retrieved from https://studymoose.com/characteristics-for-good-governance-in-afghanistan-essay 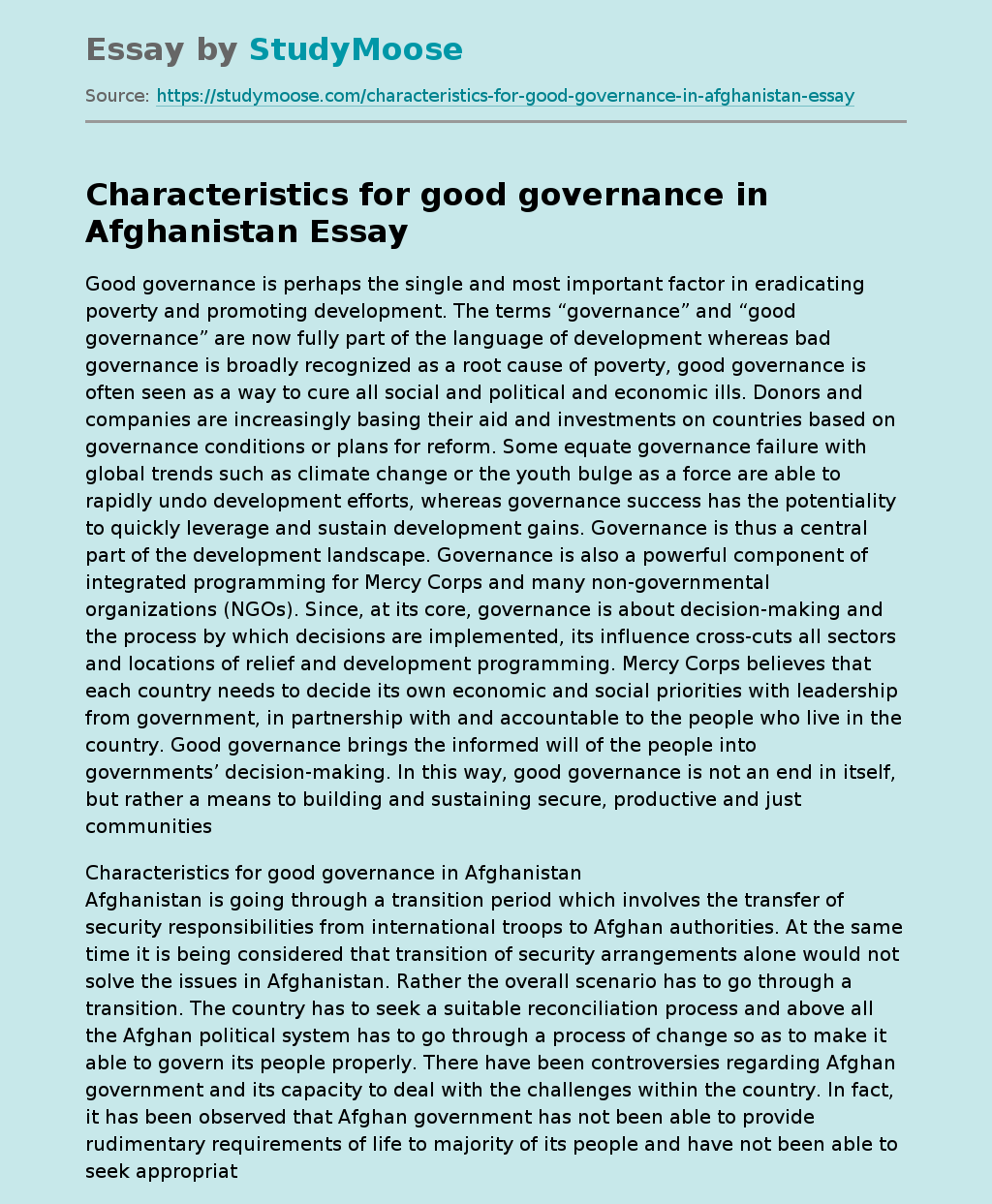