The poem begins with the description of the tree.

Turn in your highest-quality paper
Get a qualified writer to help you with
“ Casuarina Tree by Toru Dutt ”
Get high-quality paper
NEW! AI matching with writer

The poet says that the creeper has wound itself round the rugged trunk of the Casuarina Tree, like a huge Python. The creeper has left deep marks on the trunk of the tree. The tree is so strong that it bears the tight hold of the creeper. The tree is described as being gallant, and possibly brave, as few other trees could survive in the strangle-hold of this creeper. The poet then goes on to describe the life that thrives amidst every facet of the tree. The tree is metaphorical said as a giant due to its huge size, strength and boldness. The Casuarina Tree is covered with creeper which bears crimson flowers which appear as though the tree is wearing a colorful scarf. Often at night the garden echos and the seems to be jubilant and the song has no comparison.

At dawn when the poet opens her window she is delighted to see the Casuarina Tree.

Mostly in winters a gray baboon is seen sitting on the crest of the tree seeing the sunrise with her younger ones leaping and playing in the tree’s shade. The shadow of the tree appears to fall on the huge water pond. Toru Dutt says that its not because of the majestic appearance of the Casuarina Tree that it is dear to her heart and soul, but also that she along with her siblings spent happy moments under it. Toru Dutt has brought out the theme of nature as something that shares feeling with humans, that lightens the burden on the heart.

The poet continues with a description of how strong the image of the tree is, even when in lands far away. Even in France and Italy (where the poet studied), she can hear the tree’s lament. The poet wishes to consecrate the tree’s memory and importance for the sake of those who are now dead – and looks ahead to her own death, hoping that the tree be spared obscurity (or that no-one will remember it). she immortalizes the tree through this poem like how Wordsworth sanctified the Yew trees of Borrowdale. She says “May love protect thee from Oblivion’s curse'”

In this poem, Toru Dutt sings glories of the Casuarina tree and describes it in detail. On the surface of it, it appears that it is all about the Casuarina tree, but actually the tree is just a medium to link the poet’s past with the present. The poet remembers the tree because of the many happy memories of childhood days that are linked to it which are a source of comfort and consolation to her in another country. The poem, therefore, underlines the importance of memories in human life. The tree brings to her mind the memories of time when she used to play under it in the company of her brother and sister, both of whom are already dead. The memories of her brother and sister brings tears into her eyes. She hopes that the tree will be remembered for ever as the yew trees of Borrowdale immortalized by Wordsworth are still remembered. 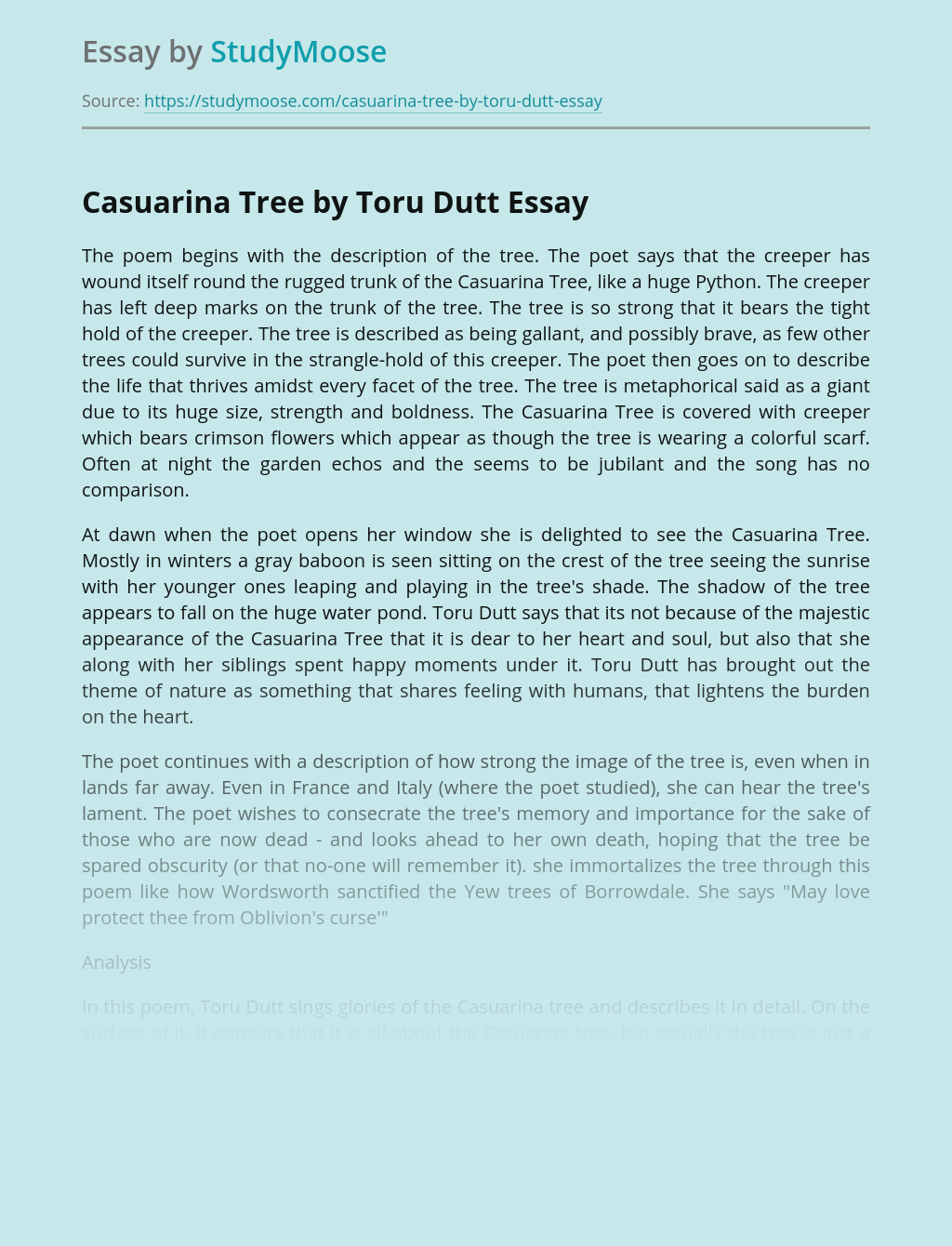 Turn in your highest-quality paper
Get a qualified writer to help you with
“ Casuarina Tree by Toru Dutt ”
Get high-quality paper
Helping students since 2015
Stay Safe, Stay Original