The Elektra Products Inc has faced the problem: market share was declining in competition of foreign and domestic area; new products ideas were few and far; morale was low at all time and employees were actively seeking new jobs. Because they are disenchanted by the current culture and they may see management as untrusted in their abilities.

Barbara Russel, a manufacturing vice president has been assigned by Martin Griffin, Elektra’s new CEO who very recently made the challenge: “As we face increasing competition, we need new ideas, new energy, new sprit to make this company great.

Don't use plagiarized sources. Get your custom essay on
“ Case Study Of Elektra Products, Inc. ”
Get custom paper
NEW! smart matching with writer

An the source for this change is you – each of you”, to lead a team which will implement a plan to change management style to a decentralized organization than encourage employee empowerment in management processing. Ms Russell forms an active team that work hard to achieve management change. And Ms Russell would allow employees to make decision suitable at their positions. When the Mr Griffin is not participate in meeting the department heads’ responses are not workable.

The resistance is happen at the middle level management when implementation is done.

In answering first sub-question of the question no 1 of “How might top management have done a better job changing Elektra products into a new kind of organization?”, we would like to express that top management could have included the middle and lower level managers, and the employees in the teams. The team should have received instruction on the concept behind “empowerment”, and how the objective was to have employees at all levels taking responsibility for decision making, at that level, and accepting responsibility for the results.

And letting them understand that positive attitude is needed in every step and every task to be done, is practically motivated on the other hand.

For second sub-question of the question no 1 of “what might they do now to get the empowerment process back on track?”, it is no doubt that getting the program back on track, Mr Griffin needs to bring managers and employees at all levels into the teams, after all involved have learned what the new management approach entails. And assigning the tast of “quick and easy to win” to every team support them in gaining the motivation.

In answer of question no 2 of “ Can you think of ways Barbara could have avoided the problems her team faced in the meeting with department heads ? ” we would like to answer that Ms Russel could avoided the problems her team face by including the department heads in her team, and charging them with identifying the challenge and obstacles to high performance in their departments. She also should have required them to apply this approach to all levels in their departments. Empowerment management means granting authority to subordinates. Her team actually tried to “empower” lower level management without including them in the solution.

In answering the question no 3 of “ If you were barbara Russell, what would you do now ? Why?”

If I were Barbara Russell, I would push slowly to reform and work for gradual support from the other teams and I would support Martin to realize the problems with inter-departmental communication that exist at Elektra’s product as he may not have been with the company for long enough a period of time. Encouraging Martin to meet with each department head in advance and try to collect information about the corporate culture and each department head’s opinion of his empowerment campaign and so, he might have had a better idea as to how he should implement his reforms. Second, by having each team membership consist of only one department, each team habitually brought their ideas for each department to change and that did nothing to contribute to the poor departmental communication. The most important things for Barbara to do is to communicate to Martin the existing problems concerning communication and trust between departments. Barbara’s other choices, to push ahead with grim determination while the CEO remains ignorant to the real cultural standard, is doomed to failure if for no other reason than that Barbara has no definitive clout among the rest of upper management, and thus not enough weight to throw around to effect change. She could try to make new teams or to debate the proposals of her team, but she may not carry enough authority to lead the other departments in such an action. Such actions could inevitably strain the current inter-departmental communications further and may not provide any positive results without lots of hard work. Once Martin is made aware of the poor communication relationships that currently exist, steps can be made to attack the problem from a different angle. Barbara, by confronting Martin on these issues, serves herself and the campaign by showing her supervisor that she is both interested in his idea and its success and by providing Martin with necessary insight into the corporate culture that he may have yet to fully realize. As a CEO who’s main function is to please the stock holders of this publicly traded company, Martin should value the information Barbara can provide him as it would serve to both increase his plan’s potential for success and to please his bosses.

Once he is made aware of the current situation, Martin will have a better grasp on just what the problems are that exist at Elektra’s product and how to solve them. As the CEO, Martin should take a strong management stance and exert his power over the department heads by clearly demarking the chain of command. Done effectively, Martin would thus have established among upper management that his ideas will be implemented and that it would be wise to support him in the campaign. This can be done by simply repeating his credos among the employees, by being very clear on his ideas, and by encouraging open discourse among the levels of upper management. This serves to not only define the company goals but to instill a new sense of purpose among the employees through strong leadership.

This methodology serves other useful purposes as well.
As well, by having a team make-up that is cross-departmental, when teams present their ideas there will no longer exist a “you against us” attitude. At this point it would be nice to know more about Martin and his history in the corporate world, and the relationship between Barbara and Simon. With this knowledge, it becomes possible to study Martin’s management style and track record so that more definitive conclusions can be drawn concerning what he should do. As well, knowing how Barbara and Simon relate can offer guidelines to how Barbara may be able to use Simon as an information tool for gauging employee’s opinions regarding the empowerment campaign and the corporate culture in general. This is just the first step towards launching Martin’s empowerment campaign and turning the company into a motivated, profitable entity. Much work has yet to be done to ensure that Electra-Quik even has a chance of becoming a market leader again, although Martin is correct in his desires to change the corporate culture. 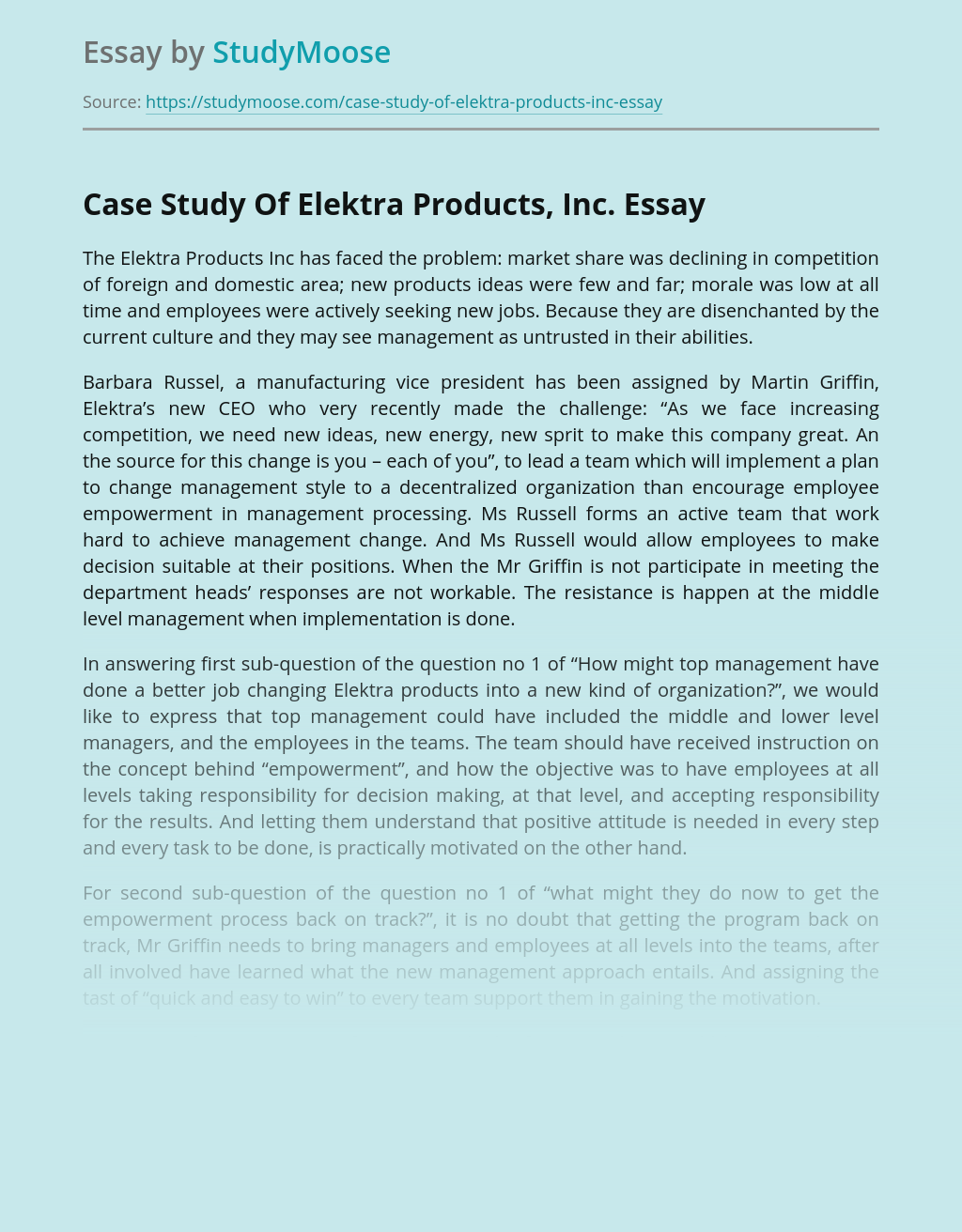