Property taxes in California have been a controversial issue for very many years. In mid 1978, approximately ⅔ of voters in California passed proposition 13. Before it had been passed, property taxes increased almost annually according to the assessed value of the property. In the 1970s, there was a remarkable growth in the real estate market and the value of homes rapidly went up. Property values were escalating substantially since assessors had to keep assessed values current. On the other hand, increments in the evaluated value were not made annually.

Don't use plagiarized sources. Get your custom essay on
“ California Proposition ”
Get custom paper
NEW! smart matching with writer

Therefore, this led to a huge tax shock for homeowners after every few years. After Proposition 13 was passed, there are several things that have taken place. The cap of property tax rates was set at 1 percent.

Also, it can increase in excess of two percent annually according to the Consumer Price Index (CPI). If the ownership of a home changes or modification is made, another evaluation is done according to the current market value. The new value should increase annually at a maximum of two percent every year. Various local agencies have been forced to look for alternative sources of funding due to the reduction in property taxes as a gross percentage of the evaluated value of houses. The aim of Proposition 13 was to safeguard taxpayers from unexpected rises in property taxes, to make it a requirement for voters to approve any increases in taxes, and to allow efficient tax relief.

How Does Proposition 13 Affect California’s Economy?

In 1994, Money Magazine published an article that portrayed the way through which Proposition 13 ruined the economy of California. The article claimed that the snowballing effects of Proposition 13 led to the reduction in family incomes, the loss of around 600,000 jobs, and the recession in the 90s (Cashill, 2007). According to the article, the proposition had a huge impact on the poor performance of California’s economy. Reducing family incomes, leading to the loss of 600,000 jobs and the recession, if brought about by the proposition, are elements that would have a significant impact on the economy of any state. Barely a year after Proposition 13 came into effect, revenue form property taxes reduced by 57 percent. In addition, from when the proposition was passed, up to 1994, the total amount of reduction in property taxes was approximated at $200 billion (Reeves, 1994). This was a lot of money that could have otherwise been used to make positive contributions to the state. Since revenues were reducing, it went without saying that spending had to reduce.

This had a significant effect on the development of the state since things such as important public services did not have sufficient funds to operate at their best. This negatively affected sectors such as medical care, education, and public safety. Marginal tax rates significantly affect the impact that taxes have on an economy. New owners of property pay the highest marginal tax rates whereas those who have owned property for decades pay very low taxes, thus negatively affecting California’s economy. How Does Proposition 13 Effect the Real Estate in California? The U.S. Supreme Court made the decision that Proposition 13 was constitutional in 1992. Furthermore, the proposition is included in the constitution of California. In the proposition, the part that caps real estate taxes is the one that has the most significant impact on the real estate in California. According to the proposition, 1% of the total value of a property is the highest rate of taxation that can be charged (Buffett, 2003).

That one percent should be collected by the various counties and shared among the respective districts as per the law. The proposition requires that the assessed value of a property is raised to an upper limit of two percent yearly. However, this may change if the property changes hands. The proposition has created an imbalance in the real estate market in California when compared to other states. For instance, in 2003, Warren Buffet claimed that he paid only 0.056% or $2,264 in property taxes for his $4 million home California, whereas he paid 2.9% or 14,410 for his $0.5 million home in Nebraska (Buffett, 2003). For investors, this means that California is a preferred location since they are likely to pay very low taxes on their property.

As much as Proposition 13 has received criticism, it still has its advantages. The proposition has increased stability in the community and allowed predictability for property owners. Progressive income tax has an impact on higher incomes, whereas property tax affects those in the lower income bracket. Therefore, high property taxes affect those that have highly valued property, but earn low incomes. Reducing property taxes for such people is a great advantage to them.

Furthermore, the proposition has enabled Californian taxpayers to save billions of dollars over the years (Smith, 1998). Those who support the proposition have suggested that the volatility of funding for municipalities has reduced as a result of capping tax increments for previously owned homes. Also, they assert that property tax revenue before the proposition was more volatile. The older generation perceives Proposition 13 as very beneficial to them. This is primarily because it allows them to pay very low taxes for the property they have owned for very many years. For the people who have owned property for many decades, they have been able to save a lot in terms of taxes as compared to other people in different states (Smith, 1998).

Proposition 13 has led to the reduction in funds meant to support public schools. This has not been taken positively by many people in California since it has led to a reduction in the quality of education. Long ago, California was known to have one of the best education systems in the U.S. However, nowadays the level of education has dropped since many students are performing poorly. Funding and control of schools has shifted from the local community to the state and many people have claimed that this has a negative impact on education (Campbell, 1998). Proposition 13 has encouraged older people to continue staying in their homes rather than selling them since they can still afford to continue paying for the taxes. Consequently, their homes are not revalued by assessors, thus additional tax revenue is not produced for the local community. This has a negative impact on younger families since they have less of a chance to occupy homes at an affordable cost (Campbell, 1998).

Proposition 13 was implemented in California in 1978 and has been controversial over the years. The proposition was implemented with the main aim of capping property taxes in California. Many people have blamed the proposition for the poor performance of California’s economy. Also, it has been said that it has created an imbalance in the real estate market in the state. However, it has its advantages and disadvantages. One of the advantages is that is has increased stability in the community and allowed predictability for property owners. On the other hand, one of the disadvantages is that it has led to the reduction in funds meant to support public schools. 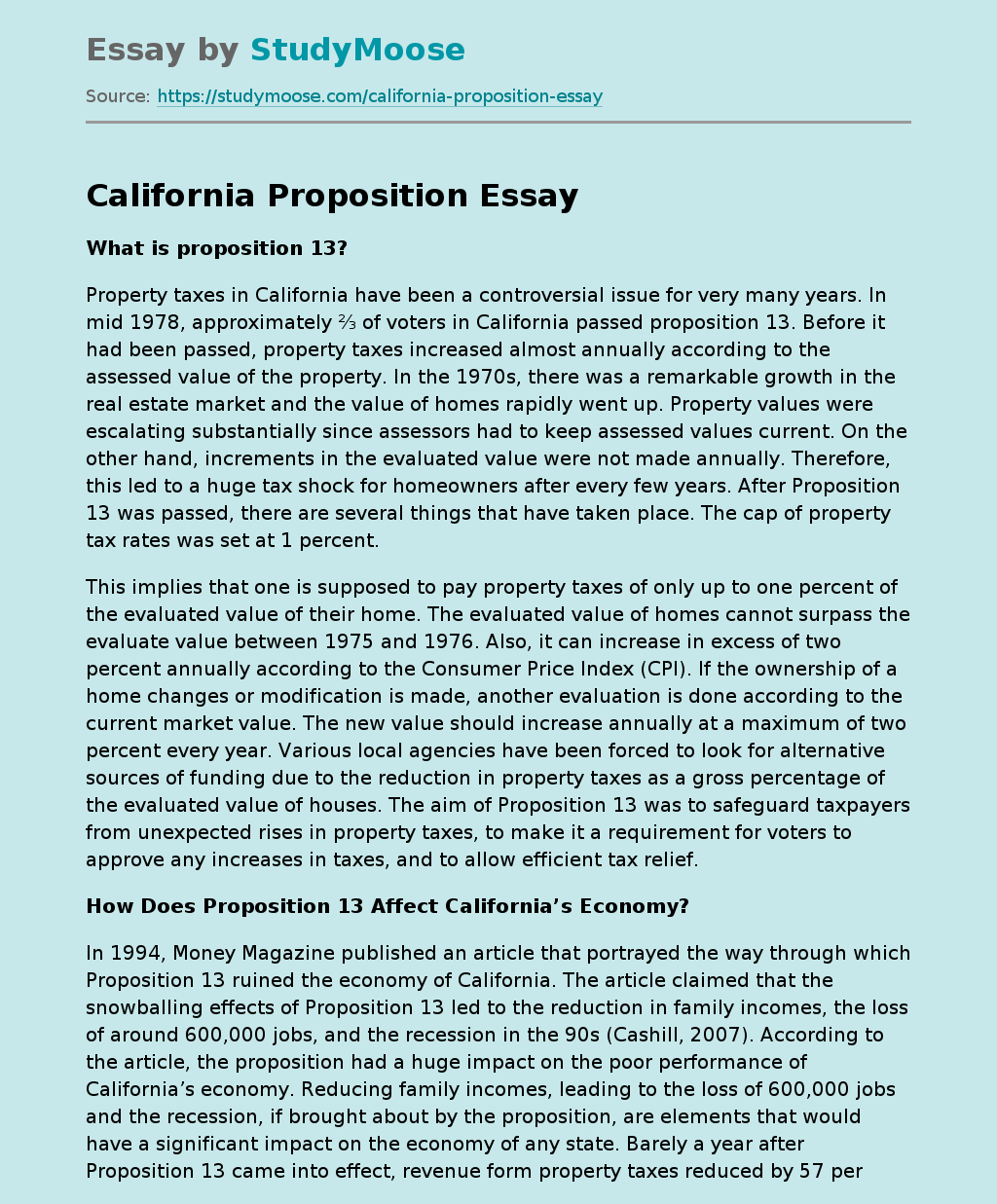