Bullies Should Be Held Legally Responsible

We all know what bullying is. We usually tend to think of it as some huge kid threatening to beat you up if you don’t give them your lunch money. But sometimes, bullying goes so much further than that. Sometimes bullies go too far, and their victims make the unfortunate choice of ending their own lives. As awful as it is, it happens every day, and the worst part about it is those bullies aren’t held legally accountable for their actions, but they should be.

Bullying is a form of harassment. It damages people physically and mentally. Even though the “normal” type of harassment is illegal, bullying someone literally to death isn’t. Rebecca Ann Sedwick was one of those victims who were bullied to death. She was a 12 year old girl in high school, and several other girls began taunting and making fun of her over a boyfriend issue. The taunting and teasing didn’t let up. Rebecca was both verbally and physically assaulted.

One girl was reported telling Rebecca to “drink bleach and die”. Eventually Rebecca couldn’t take it anymore and she climbed to a concrete tower and hurled herself to her death. Rebecca was harassed, which is against the law, but people don’t seem to understand that. In addition to being a form of harassment, bullies should be held legally accountable for their actions because those who bully know the difference between right and wrong.

In the case of minors, when bullying gets brought up, many people bring up the fact that their brains are not fully developed until the age of 20 or so.

This is true, and I do not dispute it. However, just because their brains aren’t entirely developed does not mean that shouldn’t be held accountable for their actions. If a minor cheated on a test, would the claim about their brains be considered legitimate and make it to where they don’t receive punishment? Of course not, so why should bullying someone to death be any different? Finally, bullies should be legally responsible for their actions because it would act as a deterrent. When most people bully, they don’t really have any fear of consequences because they know that there really aren’t any, which is exactly why there should be serious consequences.

Because of the lack of punishment, people just say hurtful things constantly without any thought about what might happen as a result. That is completely ridiculous and something must be done about it. If people knew that their bullying harassment might land them in jail, they would certainly think twice before making those nasty, attacking comments that cause such tremendous harm. Those who have been victimized to their breaking point deserve justice, and holding their tormenters legally responsible is the only way they will receive it. The problem is, when someone has finally had enough of being bullied and they end their lives, no one sees it as anyone else’s fault but their own. Somehow suicide isn’t as bad as murder, when in fact, its every bit as devastating, if not even more.

Bullies Should Be Held Legally Responsible. (2016, May 07). Retrieved from http://studymoose.com/bullies-should-be-held-legally-responsible-essay 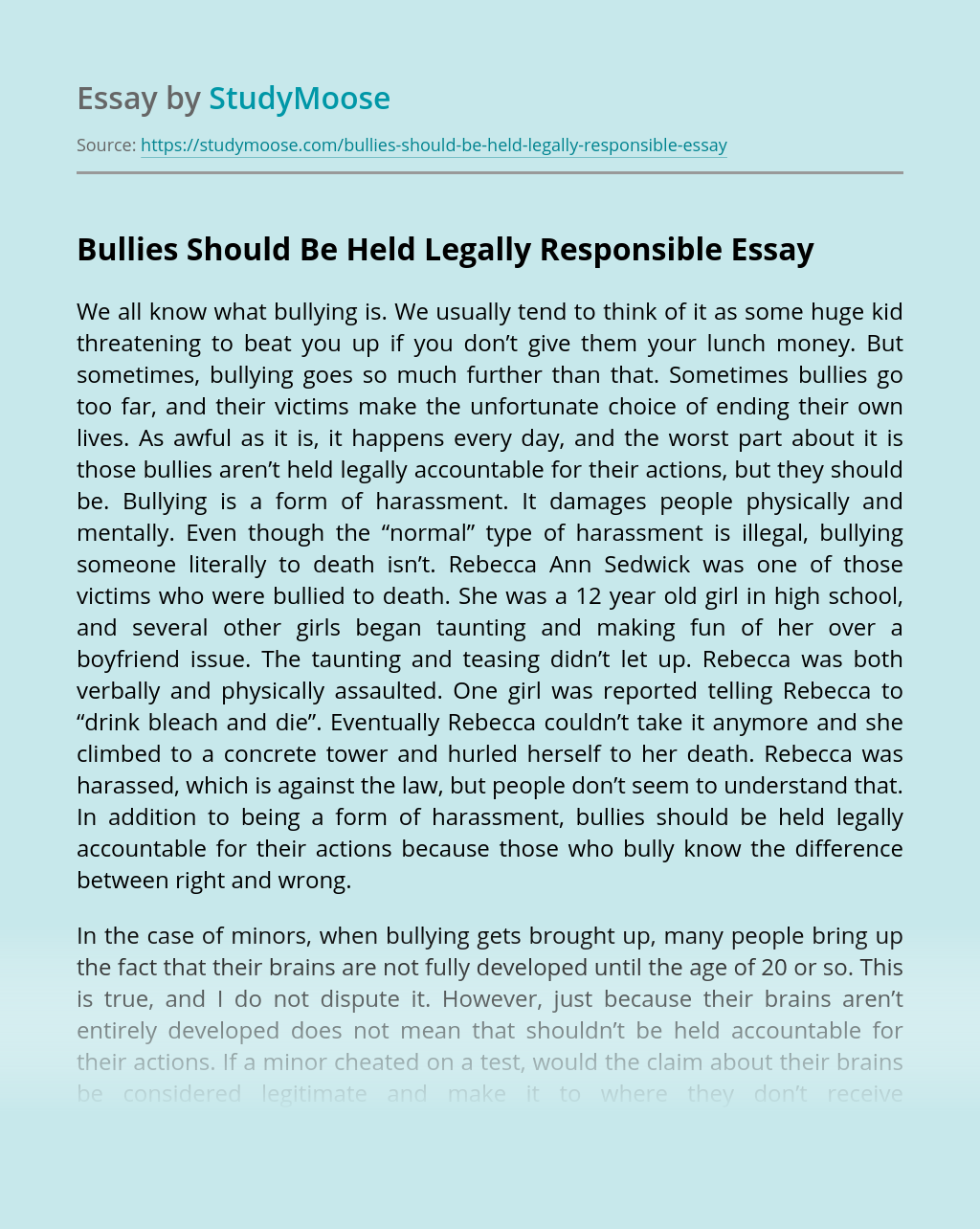 Don’t waste time
Get a verified writer to help you with Bullies Should Be Held Legally Responsible
Hire verified writer
$35.80 for a 2-page paper
Stay Safe, Stay Original