Abstract
The bromination of trans-cinnamic acid was completed to determine dibromide’s stereochemical structure and its mechanism. After the addition of bromine to trans-cinnamic acid, the product was identified by its melting point and infrared spectrum resulting in erythro-2,3-Dibromo-3-phenylpropanoic acid after comparing similar properties. Introduction

In this lab, the bromination of trans-cinnamic acid was completed to determine dibromide’s stereochemical structure, and from there determine whether the reaction is carried out by the usual bromonium ion mechanism or a different mechanism.

Don't use plagiarized sources. Get your custom essay on
“ Bromination of trans-cinnamic acid ”
Get custom paper
NEW! smart matching with writer

This is important in the determination of dibromide’s stereochemical structure, as a mechanism can be affected by changing a reactant’s structure.

Cinnamic acid was used in this lab because as a naturally occurring compound, it has many different uses. It is used as a flavoring, in perfumes, and is a source to a large number of other natural substances. Cinnamic acid is helpful in providing flowers with their bright colors, butterflies with their colorful wings, and gives fall leaves their distinguishable color.

These examples reveal the day-to-day uses of cinnamic acid, and shows that the addition of bromide to this particular acid is nothing extremely complex or an uncommon chemical compound, it is easily obtainable.

After the addition of bromine to trans-cinnamic acid, the product is identified by its melting point and infrared spectrum. The product could be erythro-dibromo, threo-dibromo, or a combination of both. Although obtaining a product consisting of both erythro and threo is possible, it results in an impure substance with a broad melting point range that contrasts pure dibromide.

These particular compounds of erythro and threo are named as such to distinguish their two chiral centers, but no plane of symmetry. Both of these compounds are derived from simple sugars, erythrose and threose (Figure 1).

Experimental
The reaction was done in the fume hood with proper safety gloves on throughout the entire experiment. 10.0 mmol of trans-cinnamic acid was combined with 6.0 mL of glacial acetic acid with a stirbar in a 50 mL round-bottom flask. The round-bottom flask was placed on a magnetic stirrer with a separatory funnel over the flask with the stopcock closed. 8.2 Ml of 1.25 M solution of bromine in acetic acid was poured into the separatory funnel and stoppered immediately. After starting the stirrer, the bromine/acetic acid solution was added in 5 portions once the color had faded to a light orange, about every 6 minutes, totaling 30 minutes for this process. Once the last addition of the bromine solution was added, the reaction stirred at 50°C for 15 minutes. At the end of the 15 minutes, cyclohexenes were added drop wise while the stirring continued until the solution was colorless. To separate, the mixture was cooled in ice water until crystallization was observed. Through vacuum filtration, the solid product was collected and rinsed with portions of ice cold water until the odor derived from the acetic acid had disappeared. The 2.3-dibromo-3-phenylpropanoic acid was dried in order to measure its melting point. 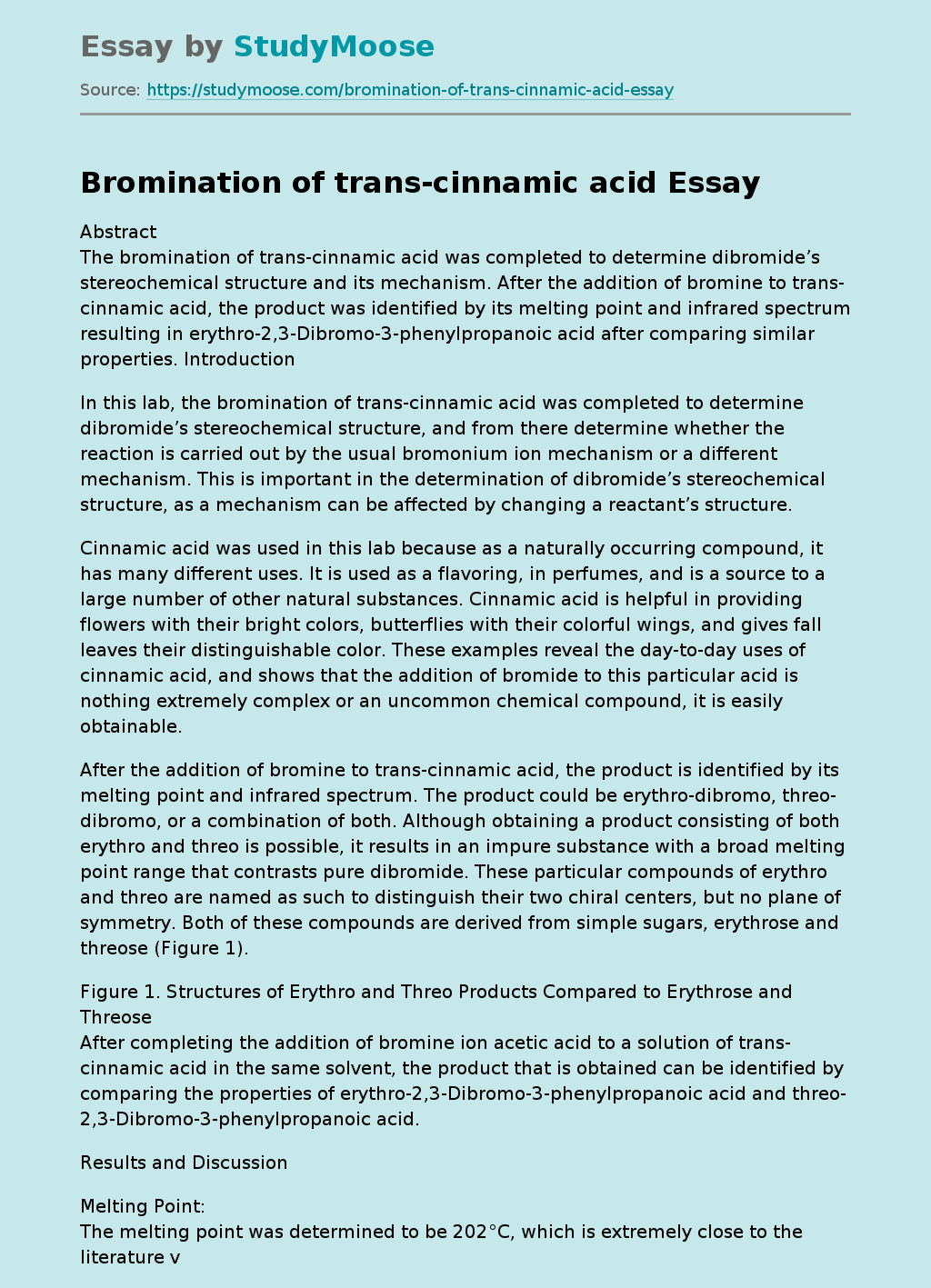