New York City, the most populated city in New York and the United States with a population of 17, 990, 455, lies at the end of the Hudson River on the southernmost tip of the state of New York. New York City is divided into five boroughs, Manhattan, Brooklyn, the Bronx, Queens, and Staten Island. The city’s physical setting is a complex assortment of lands and islands.

The only borough of the city that is on the mainland of New York is the Bronx.

Don't use plagiarized sources. Get your custom essay on
“ Boroughs of New York City ”
Get custom paper
NEW! smart matching with writer

The Bronx is separated by Manhattan island and the Harlem River. This river is a harbor to many good-carrying ships (‘New York.’ 290-293). The Bronx is mainly a residential borough. It houses around 1.3 million people and has more than 15, 000 apartment buildings. Two of the largest housing developments are located in the east Bronx. East and West Bronx are divided by the Bronx River.

West Bronx is host to many popular areas, such as the Bronx Zoo, the New York Botanical Gardens, and the Yankee’s stadium.

The name Bronx originated from the explorer from the Netherlands, Jonas Bronck, who colonized it. The Bronx is also home to one of the five poorest Congressional Districts in the United States. Despite this, the Bronx still has a strong middle class (‘New York.’ 228-229).

Manhattan is the oldest and most famous borough. It is home to some of the tallest buildings in the world, such as the One World Trade Center. Most of New York’s’ attractions are located here. One of the most famous parks in the world is located in Manhattan.

Queens is the most diverse borough in New York City because it has so many different cultures living there. It’s also home to many museums including the Museum of Natural History and MOMA PS1.

Brooklyn has some of New York City’s most historic neighborhoods like Williamsburg and Greenpoint as well as some of our favorite parks like Prospect Park and Brooklyn Bridge Park!

Staten Island is known for being a quiet suburban area with a large number of families living there year-round instead of just during summer months like other parts of New York City do (such as Long Beach or Rockaway Beach).

Boroughs of New York City. (2020, May 05). Retrieved from http://studymoose.com/boroughs-of-new-york-city-essay 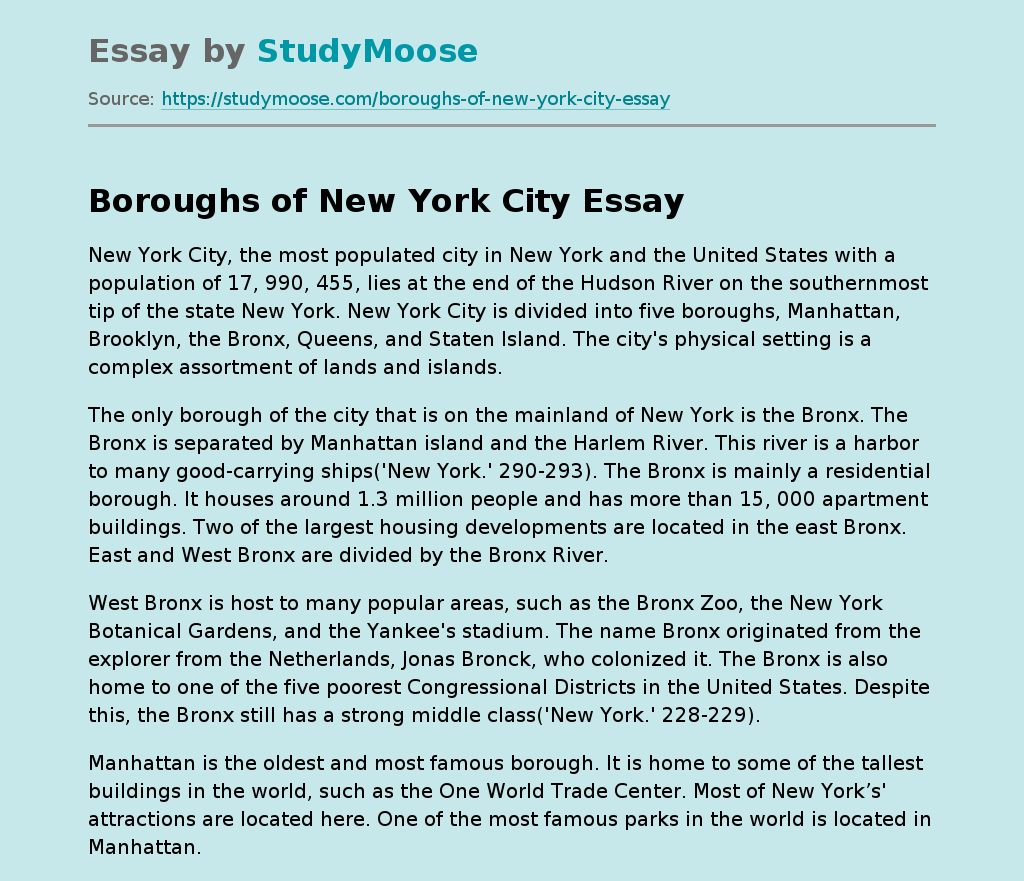