Book Review: A Wrinkle in Time

The book, ‘Wrinkle In Time’ was a very popular book. So popular that, it had two movies (2003-2018) and sequals, including the Quintet books.

The book starts with Meg wishing that her father was still around. She wakes up, and she’s getting unsettling flashbacks about people ridiculing her. As she’s walking into the kitchen, she sees Charles Wallace, her brother, then her mom walks in and talks to Meg about the bruise on her head. During the monologue, Ms.

Don't use plagiarized sources. Get your custom essay on
“ Book Review: A Wrinkle in Time ”
Get custom paper
NEW! smart matching with writer

Whatsit suspends the talk and explains how she got there.

Then, something starts to startle Meg’s mom. Something about the ‘Tesseract’ that Ms. Whatsit had mentioned. As the night passes we come to a new day, Meg’s mom had made french toast. One of the twins had a fuss about how Meg should’ve come to them to fight, not fight for herself. Of course she’s mad at them who wouldn’t be?

As we skip a few pages, let’s talk about how my life was similar to this.

Proficient in: A Wrinkle in Time

Now, as a teenager, I look down at my self all the time. Like for example, if I think I don’t do well, or I need better friends, that’s what Meg is feeling, and that’s the connection between me and her.

If I had a choice, between the bouncing through different worlds and the part where Charles Wallace goes and roasts every one there, I’d have to say I liked him being the boss he was.

Another one of my favorites, is when Meg and her dad are finally reunited.

The book went through development from the last fifty years. First, the book was first published in 1962, then began getting more popular by the years, including two movies. Two were made by Disney, first, A Wrinkle In Time 2003 was in production for about a year and half and was about four hours and thrity minutes long. That’s about reading the graphic novel by Hope Larson (totally reccomend) thrice. The other one (that was made in 2018) took about the same time as the last movie. Movie critics liked the 2003 edition better (42% (2003) vs 29% (2018)) but I do NOT reccomend it.

I wouldn’t reccomend the 2003 vs the 2018 is because that was 14-13 years ago. It’s probobaly really boring and low quality if it’s four and a half hours long (Seriously, don’t watch it). But the book is really good I totally reccomend it: and while you’re at Barnes and Expensive, get the graphic novel by Hope Larson, you won’t regret it.

Book Review: A Wrinkle in Time. (2021, Apr 01). Retrieved from https://studymoose.com/book-review-a-wrinkle-in-time-essay 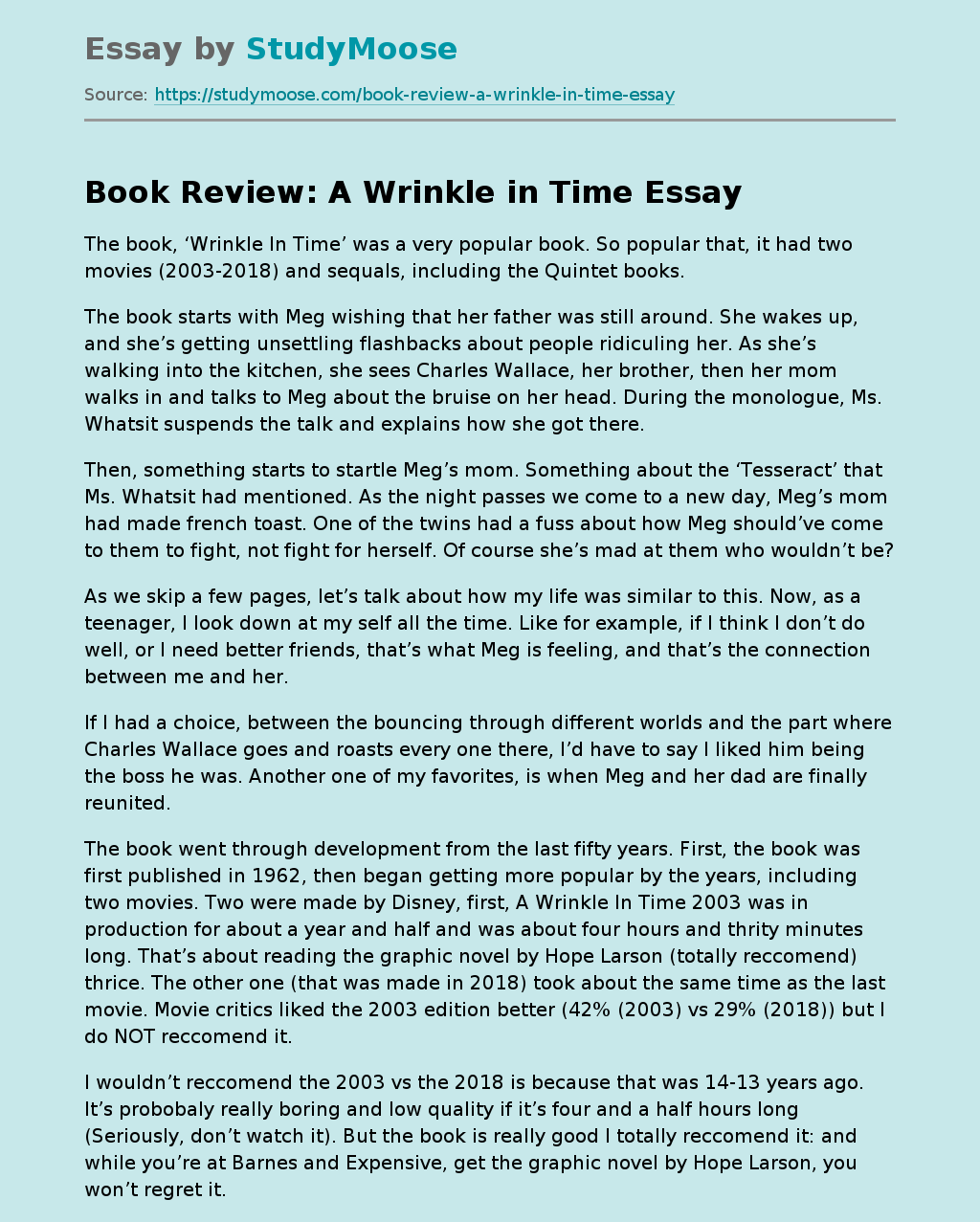