Speech problems are serious hardship for children as they have to cope not only with medical aspects of the problem, but also with social exclusion and mockery. David Mitchell in his book tends to recreate the childhood from the child’s viewpoint, to transmit feelings, emotions, doubts and anxieties of children. Moreover, the author decided to show the life and hardships of a boy suffering from stammer. Children always feel embarrassed when they stammer as they think they may be mocked at.

Don't use plagiarized sources. Get your custom essay on
“ Black Swan ”
Get custom paper
NEW! smart matching with writer

The world of children with speech problem is delicate and fragile; therefore, they are vulnerable to more stresses and anxieties.

They are less confident and more reserved. That is what the author is willing to show in his book. Jason Taylor, the main character, is a common teenager who was born in a village in Worcestershire in the year of 1982. Though he is unremarkable in appearance, he is aspiring poet. He is highly gifted child with rich inner world.

Jason tells the story about his school days, about problems with parents and his elder sister who irritates him constantly. However, Jason has speech problem – he has a stammer and this fact makes him feel embarrassed and unconfident. Like all children Jason has secrets from his parents and school friends.

He hides the fact that he is a poet and his poetry is written under the name of Eliot Bolivar. (Mitchell 2006) The author starts his novel from explaining and examining the social status of childhood. The first chapters are devoted to analyzing why some children are called by their first names, some children – by “sort of respectful nicknames like ‘Yardy’”, wheras others by their surnames and some by ‘piss-take nicknames like Moran Moron or Nicholas Briar who’s Knickerless Bra.

. It’s all ranks, being a boy, like the army”. Mitchell shows that children are other people in the world.

The book is an interesting and exciting story of a 13-year boy whose parents divorce. The author provides detailed overview of his anxieties, thoughts and reflections. Actually, the author details on the first year of his life after the divorce. It is discovered the Jason’s father has another woman. As for me, the most impressive part of the book is when Mitchell writes about Jason’s stammer stressing that this speech impediment causes lots of problems for young boy as he has to “think one sentence ahead, and if you see a stammer-word coming up, alter your sentence so you won’t need to use it”.

Jason is a very sensitive and vulnerable personality and he is afraid of being labeled as “Stutterboy”. He hides his stammer and fears that his school friends and teachers would become aware of his speech problems. The author impressively conveys Jason’s inner anxieties and feelings to the readers. The book is poignant as the author is struggling to keep the tension and intrigue at the desires level. (Mitchell 2006) I think that the book is a mix of genres as the author refers to social realism when showing that children with speech problems may suffer from social exclusion, and romanticism when conveying Jason’s inner struggle.

Mitchell vividly depicts Jason’s family life. Mitchell shows his best qualifications of a caricaturist. He has a better ear for the smarmy and the self-important, like Jason’s father, than for the more softly spoken. For example, he claims at the dinner table: “The principle, o daughter of mine, is a universal constant. If you don’t keep records, you can’t make progress assessments. True for retailers, true for educators, true for the military, true for any systems operator. One bright day in your brilliant career … you’ll learn this the hard way and think, if only I’d listened to my dear wise father.

How right he was”. Actually, Jason gets the best lines in the novel. The author chooses the child character to show the different consciousness, different attitudes and perception of the problems and anxieties. Mitchell defines childhood as inevitably the age of false notes and brashness. He outlines that children shouldn’t be allowed too much knowingness. Jason is well-educated and quick-witted boy and his perception of the world is rather fresh and original. For example, Jason thinks: “Woods don’t bother with fences or borders. Woods are… fences and borders.

The world won’t leave things be. It’s always injecting endings into beginnings. The crows parascended up and off”. (Mitchell 2006) Jason is also very observant and shrewd. When he sees that his father meets his brother-in-law, he mentions: “Each was wearing the jersey the other’d given him for Christmas”. In such a way the author restore the slang of Black Swan’s school children. (Mitchell 2006) I like the way Jason depicts love and affection, when a girl attracts him, he says: “Magnets don’t need to understand magnetism. Listening to houses breathe makes you weightless”, etc.

But the striking sentences and snatches of dialogue are too often waylaid by cutesy apercus – “The earth’s a door if you press your ear against it” – and the narrator’s wish to be too cunningly callow. (Mitchell 2006) Speaking about what I have learnt from the book, firstly, I want to say that the book has made me more aware about the world children with speech problems live in. I am really impressed by Taylor’s pretence to see beyond his childhood. I think that boy is too clever and intelligent for his age, though he shouldn’t hurry to become old.

The book is very informative as it reveals the reality of life: children wit stammer may undergo mockery and social exclusion. A child may be excellent student and talented personality, though children would laugh at his speech impediment. The author teaches us to be more tolerate and to think and only then to act. Moreover, I see psychological changes occurring with children after parents have divorced. I found out that children became more reserved and failed to display their true feelings and emotions. And I think that Jason’s stammer is apparent consequence of parent’s divorce. (Mitchell 2006)

David Mitchell wants, in my opinion, to do a very ambitious thing in this novel, which is to write a book about a young adolescent – and the young adolescent as natural poet – as though it was written by a young adolescent, but he hasn’t quite found the voice for it. A young adolescent finding his voice by experimenting with other voices is a useful device for a novelist. But a young adolescent is even more promising for contemporary fiction because he is someone who doesn’t want to be too accessible or too unpopular. Mitchell’s fans should see this as a transitional novel in what is already an intriguing career.

The book is surely the ambitious study of adolescence. (Mitchell 2006) The book is relevant to the course “Communication Science” as the auhtor discusses speech probems of Jason Taylor, in particular, stammer and its psychological affect on child’s behavior. Mitchell shows that speech problems make children feel shy and self-conscious. Ccommunication is playing nowadays one of the most important roles in society because it is the core source of mutual understanding among people. Communication is the greatest luxury given to people. 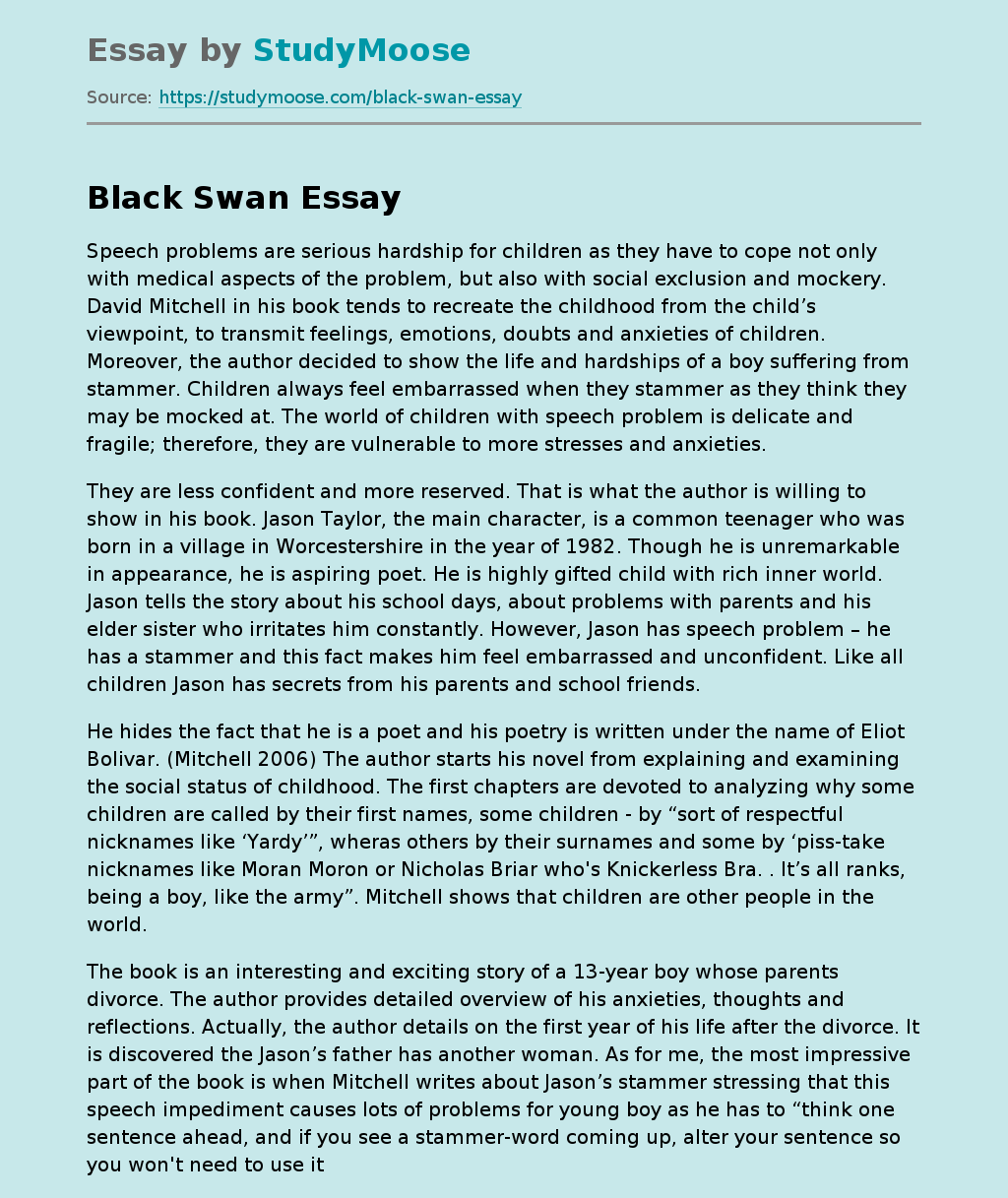